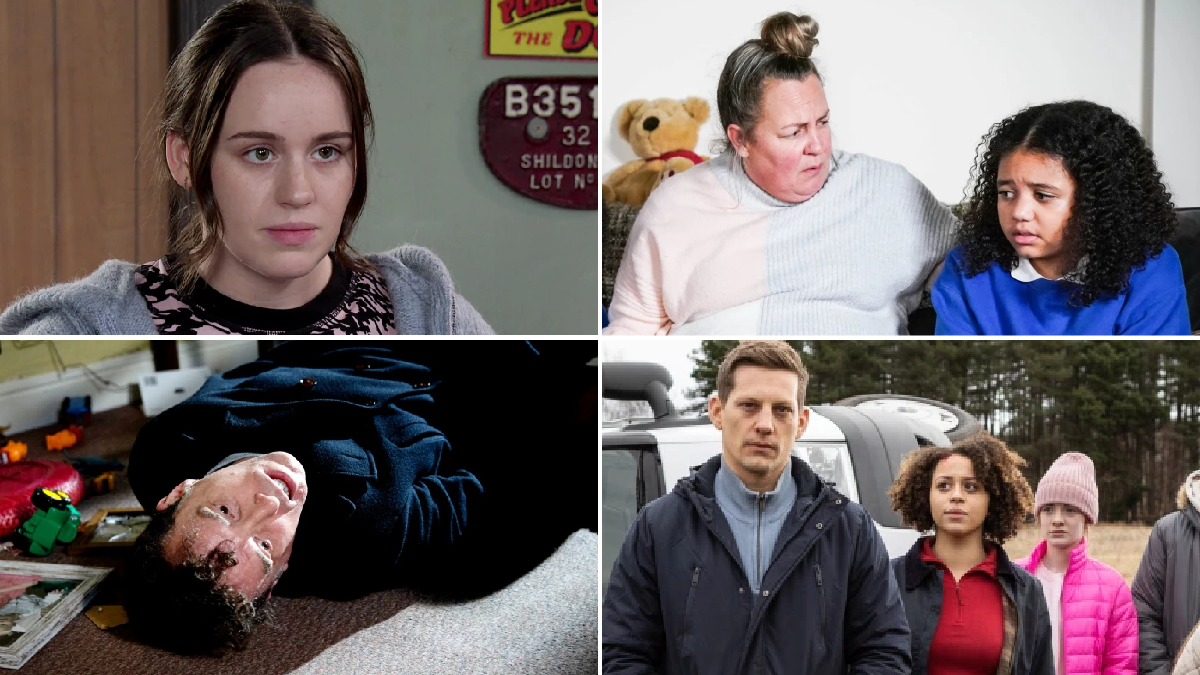 Next week could prove to be the biggest of the year thus far in the land of soap, as a number of major developments take place across the nation’s four biggest serial dramas.

Coronation Street, for one, will see several stories reach dramatic peaks, as Lydia Chambers wreaks havoc again, but this time, there are deadly consequences.

Faye Windass, meanwhile, fears that she is pregnant, while Laura Neelan demands the truth about Rick from Gary Windass!

Over in EastEnders, Mack and Mia make a devastating discovery about their dad Gray Atkins, while Stacey Slater continues to worry about mum Jean.

Emmerdale’s Marlon Dingle will suffer a stroke, mere moments after he and Rhona Goskirk simultaneously propose to one another, while Hollyoaks’ John Paul McQueen is at the centre of a devastating bus crash.

It’s going to be a week that will have a huge impact on the soap landscape, and if you’d like to know a little bit more about what’s in store, you’ve come to the right place!

Sarah is intent on filing for divorce. Adam, therefore, texts Lydia to meet at a coffee shop, hoping to catch her out by recording her. Lydia, however, sees through his plan and wrestles his phone from him. The device smashes. Lydia seethes, slapping Adam before giving him a violent thud. Adam topples backwards and falls over the railings!

Gary is stunned when Maria reveals the new site for County’s training ground. Why? Because it’s the very same spot he moved Rick’s body to! Laura, meanwhile, is confused when the private investigator tells her that he’s had no luck in tracking down Rick, claiming that all the evidence suggests he’s dead and the prime suspect is Gary! She subsequently confronts Gary, but will the truth come out?

Faye confides in Elaine, revealing that she might be pregnant. The timing, however, is awful, as she and Craig are at loggerheads. Elaine urges her to take a test. Craig, meanwhile, reveals he will talk to his old boss about the possibility of rejoining the police force.

Stacey is concerned as Jean reveals she is planning a surprise for the children. Outside, Jean has blocked the market by purchasing a bouncy castle for all the kids to enjoy. Stacey, however, is mortified when she sees her mum on the bouncy castle. Jean accidentally hurts Arthur and embarrasses herself in the process, so Stacey does her utmost to get her mum off the bouncy castle. Harvey, however, joins Jean, infuriating Stacey that he doesn’t truly understand Jean’s condition. Stacey goes to desperate lengths to try and help her mum, banning her from being alone with the children until she’s seen a doctor!

Suki and Dotty find out from Kheerat’s lawyer that he’s intent on pleading guilty. Suki begs the lawyer to find another way. Dotty, meanwhile, asks Sonia for money and, after pleading with her, Sonia eventually agrees. Dotty uses the money and asks a surprised Eve for legal advice about Kheerat’s case.

Mitch and Karen are still awkward around each other in the wake of recent events, but ultimately they come together to support Mack and Mia following a worrying phone call. Arthur, you see, has told them about Gray killing Kush. Later, the grandparents comfort Mack and Mia.

Rhona and Marlon simultaneously propose in a moment of pure joy. Marlon dashes off to find the engagement ring, but as he searches his vision becomes impaired, and he falls to the ground, realising that he’s suffering from a stroke. Frightened and disorientated, he desperately clings onto consciousness as he scrambles to remember the F.A.S.T acronym. April rushes home to see where he’s got to, and she swiftly calls for an ambulance. Will Marlon be okay?

Charity pays a visit to see Sam and Lydia, who both encourage her to make amends with Chas – before she comes to regret it! Lydia, meanwhile, delivers Chas some tough love, challenging her to be the bigger person in this on-going feud with Charity. Chas therefore joins her family at The Woolpack and soon slots back into her old rhythm behind the bar with Charity. After a heart-to-heart, Charity begs Chas to move back into the pub.

Liam learns from Ethan that Manpreet will not be testifying in court. It’s safe to say he’s upset, and the atmosphere quickly turns sour, as he worries that he may never get justice for daughter Leanna.

The day of the school camping trip arrives, and John Paul is made designated driver. But soon enough, he finds a bottle of vodka in his puffer jacket. Doing his best to keep it concealed, he remains visibly on edge. The question is: will he be tempted to take a drink?

As they set off on the road, the kids become rowdier, and it’s not long before they’re all lost. Tragedy then strikes, as John Paul closes his eyes, before losing control of the vehicle. Afterwards, he regains consciousness, horrified to discover what has transpired. Olivia takes charge, as she rounds up the kids from the van.

Mason Chen-Williams, meanwhile, is worried sick as he realises that newcomer Freya is still in the van, and she’s stuck under all of the luggage.