Over the last dozen years, Disneynature, Disney’s nature documentary wing, has churned out a wide variety of films that cover all manner of the animal kingdom and its attendant environs. Some have been huge hits, like wide-ranging smashes “Earth” and “Oceans” or the beloved animal-centric offerings “Chimpanzee” and “African Cats,” while others have fizzled (remember “Ghost of the Mountains”? maybe “Penguins”?). Along the way, the dozen-strong film lineup has shored up a predictable formula that combines on-the-ground insight with a cutesy, anthropomorphized look at some of the wild’s most majestic creatures.

And when it works, it really works. Mark Linfield’s “Elephant,” the first of two new Disneynature docs pushed directly to Disney’s fledgling streaming service Disney+, is one that works. Linfield, who previously co-directed sterling Disneynature offerings “Earth” and “Chimpanzee” alongside Alastair Fothergill, is now armed with a new partner: co-director Vanessa Berlowitz, a long-time producer making her directorial debut on the film. The result, vibrantly narrated by Meghan, Duchess of Sussex, is a slightly bouncier, more buoyant feature than some of its cinematic brethren, but one that accomplishes the necessary: it brings viewers inside the world of its awe-inspiring title stars.

This time around, the crew follows a herd of African elephants as they undertake a thousand-mile, months-long journey across the Kalahari Desert, journeying from the Okavango delta to Victoria Falls and back again. As we’re repeatedly told, they are one of the last groups able to do this, one of the few herds left that are free to roam the African continent as their ancestors did. Bolstered by eye-popping overhead photography that charts their perilous course, “Elephant” tells a compelling and little-known tale about some of Africa’s most intelligent inhabitants. 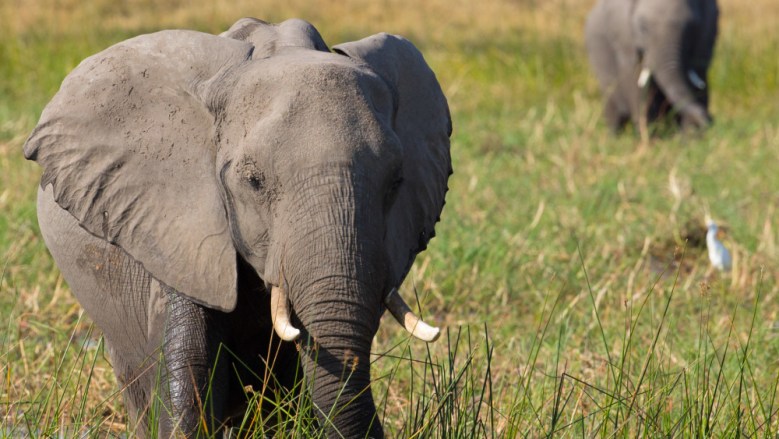 As is typically the case with Disneynature features, “Elephant” zeros in on some animal stars early on — year-old Jomo (a Disney hero in the making), plus his clever mom Shani and her sister, the herd’s wise matriarch Gaia — and cobbles together an easy to understand narrative that should appeal to audiences of all ages. It’s also a touch predictable, though its occasionally over-the-top foreshadowing may lessen the inevitable emotional blows, especially for its younger viewers.

That elephants are extremely smart creatures who value their herd over all else does wonders for the film’s narrative path, and while “Elephant” is as guilty of humanizing its animal stars as the rest of the Disneynature tribe, the animals that populate it really are as emotionally attuned as their human cousins (perhaps even more so). Viewers will likely be astonished to learn about the work that goes into their annual migration, with “Elephant” digging deep into the process that guides Gaia’s wisdom and canny ability to lead her family through numerous challenges. An early scene in which Gaia single-handedly saves a tiny calf from a sticky patch of mud is a terrifying high point, one that trades on the inherent smarts of its animal subjects and lets on just how perilous their existence can be even in the best of times. (It also establishes Gaia as a leader of the highest order.)

While Disneynature films have never shied away from the inherent danger of the outside world — the series is one of the few made for kiddie consumption that routinely features the possibility that one of its fuzzy-wuzzy lead characters will be ripped to shreds on-screen — the Duchess of Sussex’s narration keeps things light, even in the most dangerous of situations. While Meghan’s voiceover work opens the film a bit too forcefully (she mostly seems really excited to be there), she settles into an amiable, intelligent pattern soon enough, bridging the gap between entertainment and education.

Not everything totally works for those aims, and as stunning as the overhead photography is throughout the film, less impressive are chintzy time-lapsed sequences that try to get inside the elephants’ minds, zipping back over the previous journey with little elegance. The drama in front of them is far more compelling than time-padding retread, a lesson even the elephants seem to realize as they dutifully trudge onward to the next adventure, whatever it may hold. Still, “Elephant” never wavers from remembering the most essential of lessons for both elephants and their admirers: life goes on, but it’s always better when we’re together.

“Elephant” will be available to stream on Disney+ on Friday, April 3.