EMMERDALE fans were left in stitches as Rishi revealed a HUGE tattoo in a botched romantic gesture towards Manpreet.

Manpreet returned to the Dales tonight following her trip to Ibiza, where her daughter Aiesha was involved in an accident. 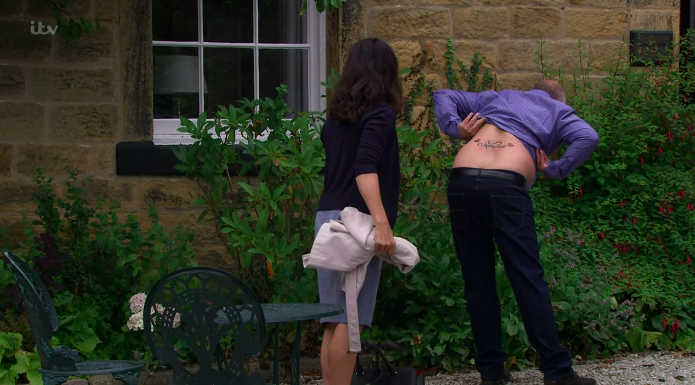 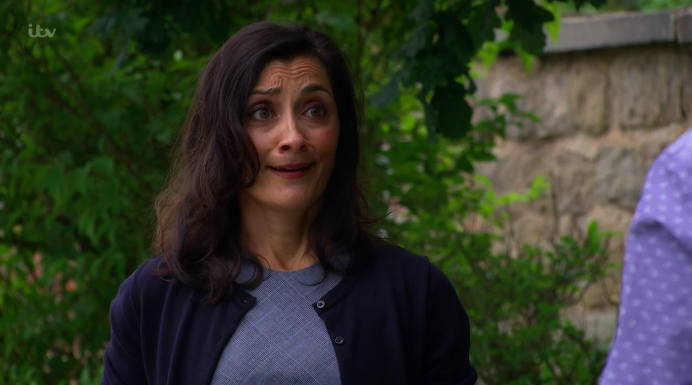 But she got more than she bargained for upon her return when Rishi swizzled round and revealed a massive tattoo of Manpreet’s name below an infinity symbol spanning his back.

“It’s an infinity symbol, because my love for you is infinite,” he explained.

Manpreet's jaw dropped, leading Rishi to explain that he thought it was a great romantic gesture.

But when Manpreet finally spoke, it was clear she disagreed.

“Romantic is cooking someone a meal, is sending them flowers, not desecrating your skin,” she said.

“So you don’t want a matching one?" Rishi asked, expecting Manpreet to soften.

But she continued to look horrified and rushed off to work.

But Manpreet didn't mince her words any longer and revealed it was over between them.

“I can’t live this lie anymore. It’s just not working. I don’t love you anymore,” she said.

Rishi looked devastated – and fans were left gutted for him.

Another added: "Great. Richie deserves to find someone that'll truly love him."

A third chimed in: "Feel sorry for rishi but at least finally manpreet has told him the truth."

Several residents will be left in danger in Emmerdale’s special stunt episodes next week, which will feature four huge stunts including a deadly waterfall disaster and drama surrounding a giant maze.

The week will begin with a flashforward to Meena lying motionless in the middle of the soap’s custom-made maize maze.

Back in the present day, the survival challenge begins and the contestant’s jump into their rafts and set off down the river.

However, disaster soon strikes as serial killer Meena spots an opportunity to exact her revenge against Victoria.

Viewers will later see Meena holding Victoria’s lifeless body under the water, but is everything as is seems?

Meena isn’t the only resident creating drama as Marlon and Paddy end up getting lost in the woods during a fight.

Meanwhile, Charity and Mack separate from their respective groups in an attempt to cheat and win the challenge.

When Mack hears a loud scream coming from the edge of the pond and sees a large ripple moving across the water, he panics that Charity has drowned.

Will he save her in time?

Meanwhile, Priya and Ellis also head off for some fun in the woods.

They share a moment of post-coital bliss, before she returns to drop off the survival challenge prize at the maze, but will she make it in one piece?

The big question is: with Meena lurking in the shadows, who will meet their end?