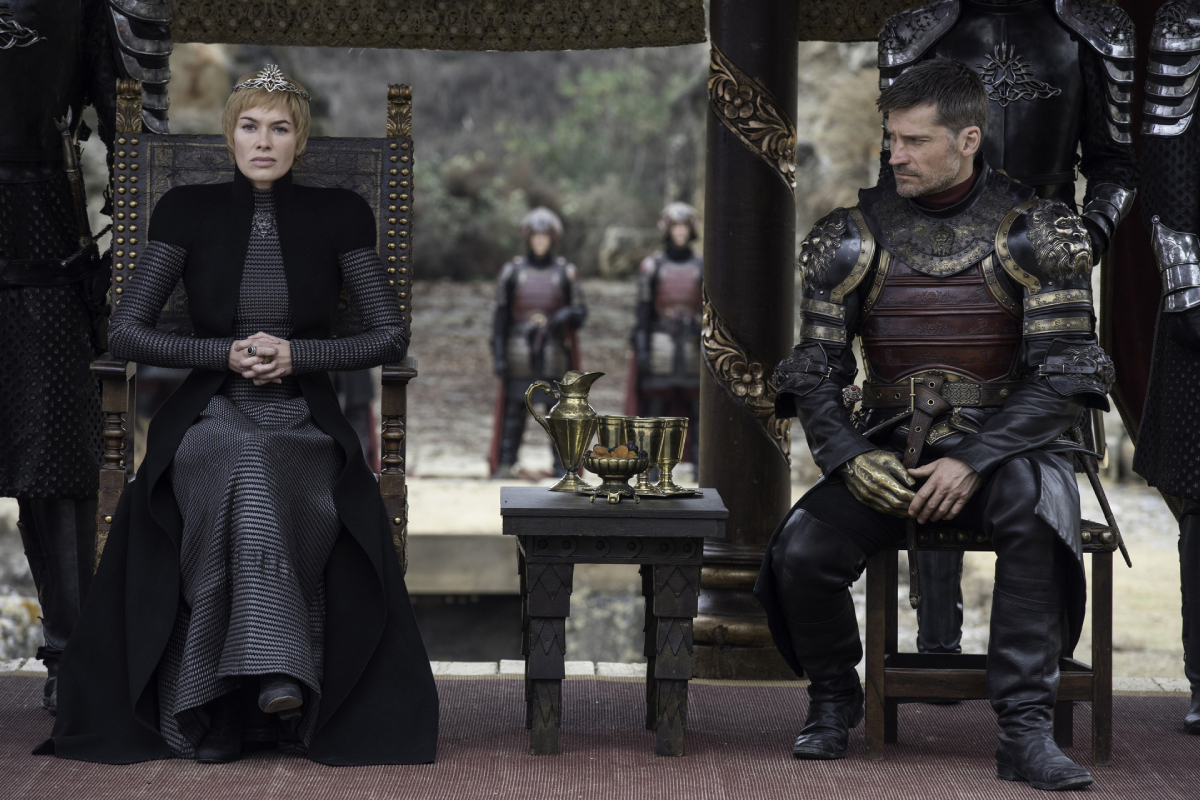 The final season of Game of Thrones gave fans a lot to complain about. And they’re still complaining more than two years after the HBO series came to an end. But not all of the series’ worst, weirdest, and most cringeworthy moments came in the divisive eighth season.

The introduction of Stannis Baratheon’s wife Selyse in season 3 was a strange moment. When Stannis visits her, she introduces herself as a crazed fanatic of The Lord of Light. She praises her god with tears of joy and announces she already knew of his infidelity before he admitted it.

But what really makes this moment weird is the reveal that Selyse keeps her stillborn sons in jars in her room. It’s a harrowing moment that shows Selyse’s unhinged mentality. Stannis’ reaction tells fans everything they need to know about this relationship.

7. The White Walkers and Craster’s baby

The less Game of Thrones fans knew about the White Walkers, the more imposing they were. That was by design, and the approach usually worked throughout the series. But in season four, there was a strange moment that featured a White Walker taking a male baby from Craster’s Keep.

The White Walker eventually lays the baby at an altar after traveling through the freezing wilderness. Then, in the Night King’s first appearance, he approaches the baby and presses his finger to the little one’s cheek. This immediately makes the baby’s eyes turn to a crystal blue.

The assumption was that the baby was now a White Walker. But fans never found out for sure. Because it was never revisited again in Game of Thrones. And, this moment is not part of George R. R. Martin’s A Song of Ice and Fire novels. So, what was the point exactly?

To set up the introduction of the militant Sparrows, viewers get a brief look into the private life of the High Septon — the head of the Faith of the Seven. He’s supposed to be a devoutly religious man, but the High Septon is caught in a brothel surrounded by naked prostitutes.

Each one of the prostitutes represents one of the Seven Gods. When Olyvar, dressed as The Father, asks the High Septon who he will be “worshipping” that day, he says The Maiden and The Stranger.

It’s a bizarre cringeworthy scene. But before he gets to “worship,’ the Sparrows barge in and accuse him of heresy. Then, they force him to walk naked through the streets of King’s Landing.

This entry pretty much speaks for itself, and we have just one question. Why would Catelyn Stark’s sister, Lysa Arryn, breastfeed an 8-year-old? The discomfort on Catelyn and Tyrion’s faces is the same look fans had when they first saw Robin latched on to his mom’s breast.

She believes she is making her son strong. Of course, the irony is that her son’s an inept, overprotected weakling who has never been weaned from his mother.

This is how fans met the eccentric Lysa, but it’s weird and it’s creepy. Especially since they brought Robin back years later for the series finale. That was a throwback no one asked for.

This wasn’t necessarily a shocking moment because fans knew that Melisandre was older than she appeared. But still, the moment Melisandre’s true form was revealed was quite jarring.

It happens when she removes her magical necklace. She transforms from a youthful beauty to a decrepit hag who is hundreds of years old. The visual difference was quite a bizarre moment.

But when you start to think about her various sexual or quasi-sexual encounters with Stannis, Gendry, and Jon Snow — and you imagine her giving birth without the necklace around her neck — that’s when things get really uncomfortable. Speaking of which…

This was easily one of the weirdest moments in Game of Thrones that fans witnessed. Season 2 of Game of Thrones saw the introduction of Stannis Baratheon — who we’ve already talked about on this list — along with the mysterious red priestess, Melisandre.

Melisandre sleeps with Stannis after promising him a “son,” and the assumption is that a baby boy will eventually be born. But just a couple of episodes later, Davos Seaworth smuggles her into a cave and she disrobes to reveal she’s very pregnant.

Then, she lays down and gives birth to a shadow with the face of Stannis. The shadow then climbs out of her womb and kills Stannis’ brother Renly.

During the eight-season run of Game of Thrones, there were several cameos from random celebrities and athletes. But they were always subtle, and the celeb was usually hidden within a scene. That all changed with Ed Sheeran’s cameo.

According to What Culture, the addition of Sheeran to the season 7 premiere was a special surprise for Maisie Williams (Arya Stark). But the global superstar singer wasn’t in the background or obscured by his costume.

He was a character named Eddie who had speaking lines and sang the song Hands of Gold. Between the lingering shots on Sheeran and Arya’s comment about his singing, this cameo was a major distraction to viewers. It took everyone watching the scene out of the story and made them very aware they were watching a modern pop star singing a song while wearing Lannister armor.

1. The incestuous ‘Game of Thrones’ pilot

Let’s be honest, the amount of incest in Game of Thrones is just too much. It happened so often throughout the show’s eight seasons, that fans actually started justifying it between an aunt and a nephew.

By far, the most awkward, cringe-worthy incest moment in the HBO fantasy series came in the pilot episode. That’s when fans met the original incestual duo — twins Cersei and Jaime Lannister.

Do we have to say out loud that it’s weird and absolutely cringeworthy to see two siblings having sex? Isn’t this just a given? And, considering that incest proved to be the core reason that all the Westeros conflicts started, were starting to scratch our heads quite a bit while looking back on the entire series as a whole.

All eight seasons of Game of Thrones are available on HBO Max.