When making the leap from romantic comedy love interest to the star of his own would-be franchise, Henry Golding had one request: Cut out the toxic masculinity. “Especially with a film like this and a character like Snake Eyes, there is a real kind of misnomer of trying to make him too masculine,” he told ET’s Matt Cohen. In Snake Eyes: A G.I. Joe Origin, he plays the titular ninja warrior in his early days, before he became the Joe’s masked commander children of the ’80s know and love.

Being mindful of how much bravado Golding put on the character didn’t come at the expense of his own action hero status, nor did it cut down on the many, many, many hours of training required to prepare for all of the movie’s sword fighting, boxing and other massive set pieces.

“I’ve been waiting for something to really throw myself at physically, and [this was] quite the movie to jump in at the deep end with,” Golding chuckles. “It was a tremendous amount of cardio and that really low horse stance. That first week of training, I remember I was just like, Wow, I can barely sit down or get up from a chair. Like, it really tore up my body for a while.”

Instead, it was being aware that Snake Eyes couldn’t punch his way through all of his problems, even as the serpentine-monikered loner seeks revenge on the man responsible for his father’s murder. “Being an alpha male sometimes can be somewhat of a burden or works against you,” explains Golding. “You need to be able to release your ego, learn or to be better, to understand your shortcomings. That’s the only way you’re going to be able to improve yourself.” 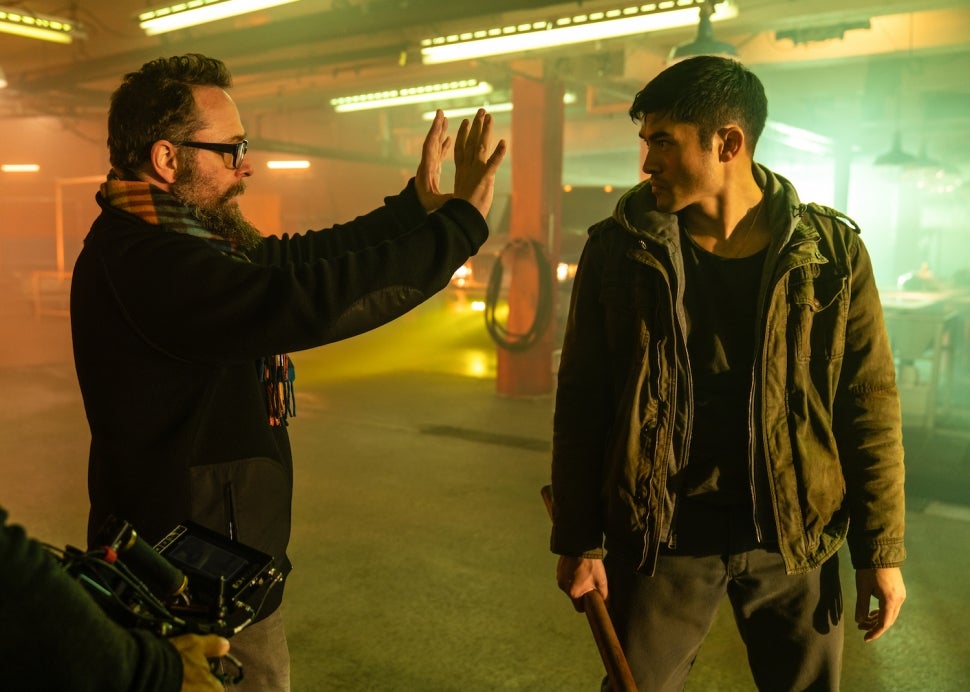 This all may seem like too deep of analysis for a popcorn flick inspired by literal action figures, but it’s the sort of thing that Golding was already contemplating as an emerging movie star and now doubly so as a new dad. “It’s interesting, because you take into account what kind of movies she’s going to be watching in the future,” he says. (Golding and wife Liv welcomed a daughter, Lyla, in April.)

“I have this amazing animated film with Paramount that we’re doing right now, The Tiger’s Apprentice” — based on the fantasy novel by Laurence Yep — “and that was something that I was like, ‘Oh, it will be amazing to show her and she’d love to be taken away to that animated world,'” he grins.

Snakes Eyes won’t be until she’s much older. “Hopefully when my baby grows up, she won’t be sick of me going, ‘Hey, you should watch this movie!'” he laughs. “‘Because this was the time when I was amazing and I could do all of this stuff and now I’m old and decrepit or whatever!”

Golding also recently wrapped filming on the latest adaptation of Jane Austen’s Persuasion, which stars Dakota Johnson as heroine Anne Elliot and Golding as her cousin, Mr. Elliot. “It’s very true to the original text but with slight sort of modern twists in humor. We’re making this with a sort of a cheeky wink,” he says. ” D.J. steals the show. Her version of Anne is absolutely subline. I just sort of jumped in and fluttered around and got dressed up and smiled.”

“I just got back two days ago from London filming Persuasion, and I was there for, in total, two and a half months,” Golding adds. “[Lyla] came out for, like, the first four weeks, but then the rest of the period, I was away, even for my first Father’s Day. I had to do it over the phone, so by the end of it, I was just yearning to be home.”

The one project the actor has nil to say about is the long, long-awaited sequel to 2018’s Crazy Rich Asians. When the first film became both a critical and commercial hit, Warner Bros. was quick to begin development on Kevin Kwan’s second book in the trilogy, China Rich Girlfriend. Now three years later, the sequel seems no closer to arriving on our screens, and we have no sense of when we’ll next see Nick Young, Rachel Chu, Astrid, Peik Lin and the rest.

“I think I’m going to find out about Snake Eyes 2 faster than I will about a Crazy Rich Asians 2,” Golding says. “We’ll slot it in between the ninja fighting and stuff. We’ll go back to Singapore and film it real quick.”

Snake Eyes is in theaters, Dolby Cinema and IMAX on Friday, July 23.