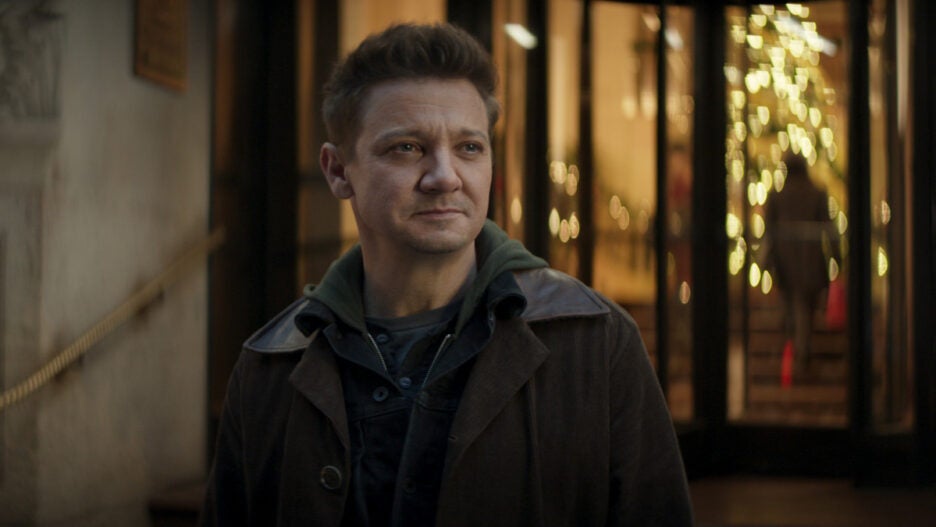 For the second time in a row, an MCU live-action Disney+ series starts off by revisiting the climatic “Battle of New York” from 2012’s “The Avengers.” The opening moments of “Hawkeye” show a young Kate Bishop and her family getting their New York apartment wrecked by the invading chitari, which ends with the death of her father, Derek Bishop (Brian D’Arcy James).

That’s also when Kate first sees Jeremy Renner’s Hawkeye, in a shot that may look familiar to eagled-eyed viewers from the MCU. We’re essentially seeing a different angle of this scene from “The Avengers.”

TheWrap spoke with Rhys Thomas, who led the directing for “Hawkeye” on how they re-created a new scene from a 9-year-old movie.

“The whole thing was completely done brand new, it was all new off the showroom floor, except there was one moment of Jeremy leaping off the building that we [used],” Thomas told TheWrap. “But we also had to shoot the other side. So we had our double recreate the leap as well. I had this great chance to look at dailies from the original ‘Avengers,’ which was kind of cool.”

And it wasn’t just a fun way to immediately tie Hailee Steinfeld’s Kate Bishop into the larger events of the MCU. It becomes a pivotal moment in Kate’s life, which leads her to the present day events of “Hawkeye,” where she’s an expert archer in her own right.

It’s not the first (or even second) time that a recent Marvel project has gone back to the Avengers’ big coming out party. “Avengers: Endgame” sends Tony, Cap, Hulk and Ant-Man back to 2012, which, like “Hawkeye,” features mostly new footage of supposedly unseen moments from the film, like how The Ancient One was also fighting the chitari, as well as some more bureaucratic scenes of The Avengers taking Loki into custody and some S.H.I.E.L.D. clean-up.

That “Endgame” scene also led to the 2012 version of Loki getting his hands on the tesseract and teleporting away, which sets in motion the events of the Disney+ series “Loki.” Because of that, “Loki” kicks off from that same moment, albeit from Loki’s perspective.

“I reused footage that they’d filmed for [‘Endgame’],” “Loki” director Kate Herron told Insider in an interview. She said they essentially “re-tailored” the scene by adding more close-up shots of Loki. Herron added that “filmed a few new shots” of Tom Hiddleston, including the close-up of Loki mockingly waving to the Hulk from the elevator after he was forced to take the stairs.