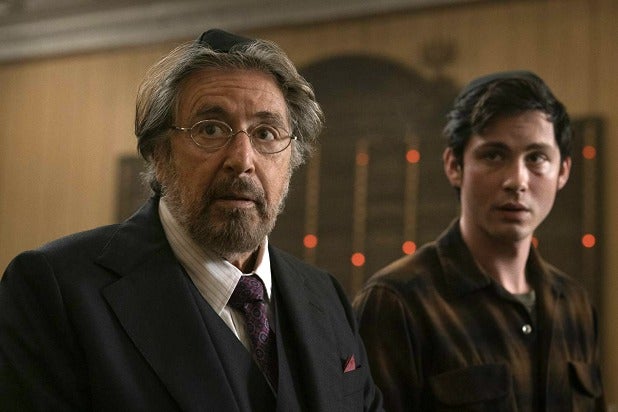 The season 1 finale of “Hunters” features a couple major twists. One of them is just a fun thing that really only has an impact as we look forward, but the other, which deals with Meyer Offerman’s secret past, recontextualizes this entire current season. And maybe it wasn’t the greatest idea because there are a lot of weird ramifications to this reveal.

There were a couple moments during the season that very strongly indicated that something was just kinda off about Meyer Offerman (Al Pacino), the leader of the Nazi hunters that the show is about.

The big one came in the fifth episode, when Meyer, Roxy (Tiffany Boone) and Lonny (Josh Radnor) take captive a woman they believe to be the former Nazi propagandist Tilda Sauer (Barbara Sukowa) — a character who sounds like a fictionalized version of Leni Reifenstahl.

The trio of hunters torture this woman for hours, including force feeding her poop. She never admits her true identity, but Meyers shoots her anyway once she starts ranting in German, calling Meyer “the great pretender.” It’s a surprising moment that at that point in the season has no explanation, and nobody ever really tries to figure it out.

But we learn the significance of that brief exchange in the finale. This is where the big spoilers start.

You have been warned.

In the season 1 finale, Jonah (Logan Lerman) uses his grandmother’s notes to finally track down the man he thinks is Wilhelm Zuchs, aka the Wolf, who was responsible for all sorts of atrocities during Meyer and Jonah’s grandmother Ruth’s time in at Auschwitz.

Jonah kidnaps the man, a local plastic surgeon, and brings him to Meyer. After a brief interrogation, Meyer stabs the guy through the neck. But Jonah is confused — Meyer had told Ruth (Jeannie Berlin) that he would hunt down Zuchs and kill him, but would definitely deliver a certain Jewish prayer for the brutal murderer before ending his life. Because the worst people are the ones who need prayer the most.

But Meyer didn’t deliver that prayer before killing this guy, and when Jonah questioned him about it Meyer didn’t know what he was talking about. Because he’s not actually Meyer Offerman. The man we thought was Meyer the whole season is actually the Wolf himself.

This is an insane twist for a lot of reasons, but we’ll come back to that in a moment. From here, Pacino delivers a lengthy explanation for how it’s possible that he actually is a Nazi war criminal who murdered a lot of Jews instead of himself being a Jew. But since you were almost certainly reeling from this bizarre revelation while he’s doing this exposition dump and it would be easy to miss the details or understand how the pieces o this story fit together.

But the short version goes like this. After the Allies liberated Auschwitz, Zuchs himself became a prisoner there. But he managed to escape his cell and murdered the real Meyer in his sleep and buried him in the woods. The Wolf left a goodbye note for Ruth, and then fled the camp and stole Meyer’s identity, forging a prisoner tattoo on his arm and the torture scar on his chest.

But later on, a former Auschwitz prisoner recognized him and just about blew his new identity. So he found a surgeon — the guy that Jonah had thought was the Wolf — to change his face and make him look like Meyer. In payment for these services, the surgeon got everything Zuchs had — that was the clue that had Ruth, and then Jonah, thinking the surgeon was the Wolf.

And then Zuchs immigrated to America and played the part of a religious Jew, learning Hebrew and reading the Torah backward and forward. And, with the help of American Jewish organizations, amassed his fortune.

The Wolf really did, it seems, reform. He referred to his involvement with the hunters as penance for his immense crimes, though he admits that of course he can never make up for all the horrific things he did at Auschwitz.

I personally find this twist unsettling because it’s thematically troublesome. “Hunters” is a show that has a hard enough time figuring out what it’s trying to say, and this only serves to muddy the waters even more than they already were.

The key issue with “Hunters” in season 1 is that it can’t decide if it wants to be a fun exploitation story in the vein of “Inglourious Basterds” or a meditation on righteous revenge a la “Munich.” That conflict was already muddled by the fact that the Nazis they’re hunting are actively plotting a new round of mass crimes against humanity, meaning there is no question whatsoever that the hunters were right to go after them and in fact needed to go after them.

There’s a weird rhetoric that pops up occasionally, the “if you kill the bad guys you are just as bad as they are” cliche. This is already an odd and honestly pretty silly thing — if you kill somebody who was actively attempting to murder tens of millions of people you are still nowhere near as bad as they are! But the show does have protagonist characters making the argument, most notably when Jonah has the abhorrent Travis (Greg Austin) in his sights in the ninth episode and FBI agent Millie Morris (Jerrika Hinton) makes that exact argument to keep Jonah from shooting the guy.

But at the same time you’ve got characters arguing the opposite, that the things they do are necessary even though it damages the souls of those doing the hunting in the long run. So it becomes an internal debate for Jonah, who is clearly damaged by his experiences on the hunt but also he knows that if this group doesn’t deal with these Nazis then maybe nobody will.

It’s just an existential dilemma, one without a real answer. There will always be bad people in the world, and there will always need to be people to deal with those bad folks. There’s no avoiding it. And if the show were content for there to be no answer, it would be fine.

But then we get this twist, the reveal that the hunters were organized by an actual former Nazi disguised as a Jew. This false Meyer had been one of those making the argument in favor of the executions of these Nazis, and that changes the thematic equation completely. What is there to infer from this twist other than that the hunt is a Nazi idea and so obviously it’s wrong? It’s a very confusing wrinkle to throw in there at the end.

This weird hodgepodge of themes and moral quandaries never coalesce into anything that makes sense overall — again, I cannot stress enough how the fact that the Nazis are an active threat to millions negates the whole discussion about the morality of the hunt anyway.

So the issue here isn’t that this Meyer Offerman twist seems to represent the show taking a side in the debate. The issue is I don’t know what I’m supposed to take away from this. “Hunters” season 1 feels like a show that wanted to say everything, but ended up saying nothing.