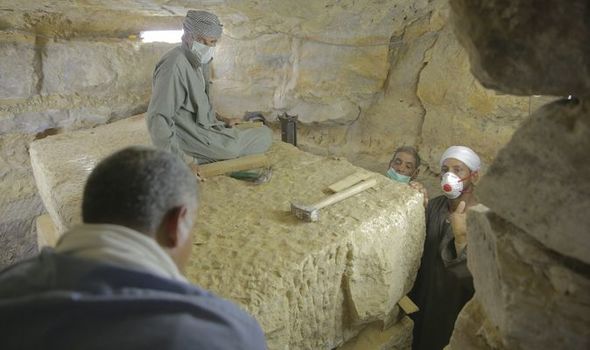 The extraordinary find will be officially unveiled in a new TV series next month, Kingdom Of The Mummies. For the first time the world gets to see inside a “fully intact funeral home”. The burial complex was unearthed deep beneath the sands at the Saqqara necropolis less than an hour’s drive south of Cairo. In the four-part series, made by BBC Studios for the National Geographic channel, a team of archaeologists explore the subterranean chambers and open four sealed, 2,600-year-old sarcophagi.

The dig was led by Ramadan Hussein from Germany’s Eberhard Karls University of Tübingen.

“The tomb contains mummies of both rich and poor people, as well as evidence of the funeral packages and quality of goods on offer,” he says.

“The evidence we uncovered shows the embalmers had very good business sense. They reused chambers and resold sarcophagi to maximise the capacity of the complex. We’ve been reading about this in the ancient texts but now we can really contextualise the business of death.”

Hussein began working at Saqqara in 2016, searching for tombs dating back to around 600BC and hidden under the ever-shifting desert.

Deep shafts existed but had been largely ignored by earlier Egyptologists, who often focused on burials from older periods in Egyptian history.

In order to reach the funeral “workshop” 40ft below the surface, Hussein and his team first had to remove 42 tons of packed sand.

After months of excavation, his efforts revealed the chamber had strategically placed ventilation shafts and a large built-in incense burner that acted as an air conditioning and fumigation system, as well as drainage channels cut into the bedrock to funnel blood. 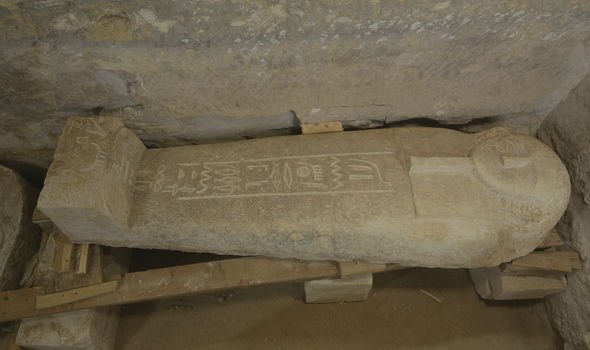 Says Hussein: “If you’re doing evisceration down there, you need air moving in to get rid of insects. You want constant movement of air when you’re dealing with cadavers.”

The discovery will be seen as a huge boost to those who study the gritty realities of mummification.

Over the past year, pottery experts were able to piece together the ceramic shards, reconstructing hundreds of small bowls and jars, each one inscribed with a label.

“Every single cup or bowl has the name of the substance it held, and the days the embalming procedure was used’,” marvels Hussein. “Instructions are written directly on the objects.”

This detailed archaeological evidence has been hard to come up with until now, according to the dig experts.

Above ground, and to the south of the workshop, they found two more facilities that were part of the funeral complex including the 100ft-deep shaft leading to six tombs containing an astonishing 54 mummies.

At the base of the shaft, they located a tomb containing five burial chambers but, beyond the visible rooms, it took them another year to discover a hidden sixth burial chamber with more mummies behind a false stone wall.

“Very few workshops devoted to the process have been properly excavated,” says Dietrich Raue, curator of the University of Leipzig Egyptian Museum. “That leads to a big gap in our knowledge.” 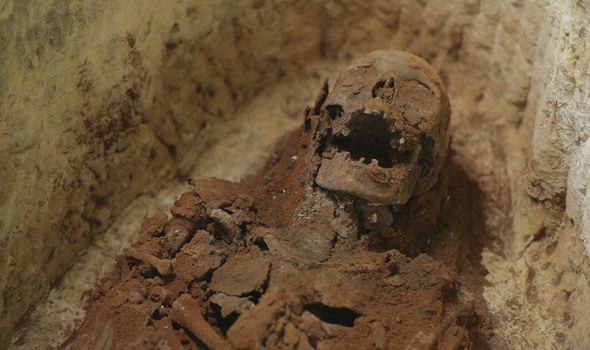 The finds include the first gilded silver mummy mask seen in Egypt since 1939.

It’s only the third such mask to ever be found in Egypt, with exquisite craftsmanship and an advanced metalworking technique that involves plating worked silver with a fine layer of gold.

For thousands of years the standard number of these sacred vessels used to store the mummified organs of the dead was four, each guarded by a special god.

There was also evidence of a previously unknown cult worshipping a mysterious snake goddess. This was identified from inscriptions of “Priests of Niut-Shaes” found on three mummies.

Two elite priests buried in the shaft were also found to be of Libyan descent.

It showed that in just a few generations of their families moving to Egypt, these immigrants reached one of the highest ranks in Egyptian society. 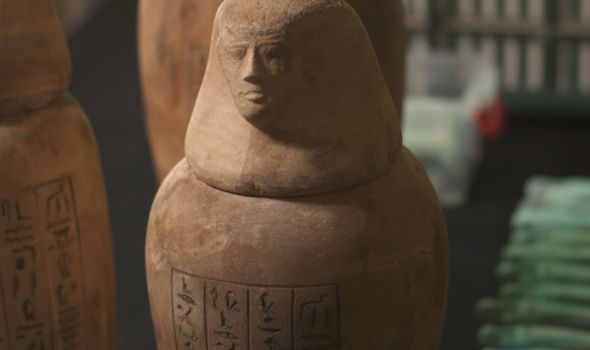 One mummy was entombed with crossed arms in a divine position usually reserved only for pharaohs.

While surveying the 3D scan of one mummy called “Ayawet”, Hussein spotted the rare crossed arms on his chest, suggesting he could have been a priest of high status.

And in a rare archaeological coincidence, two of the mummies might be mother and son, buried only 13ft apart.

New technology will give the viewer a hugely detailed picture.

A medical CT scanner created a 3D digital replica of the sacred canopic jars and their organic contents, a process that has only ever been performed on a handful of such jars.

Kingdom Of The Mummies, National Geographic, June 14, time to be set