Good Morning Britain continued on ITV today with Ben Shephard and Charlotte Hawkins and of course, many of the conversations surrounded the news that the Prime Minister’s chief aide Dominic Cummings had driven 260 miles across the country with his wife who had suspected coronavirus. Mr Johnson called his actions “responsible” but Lorraine Kelly has hit out at Mr Cummings this morning insisting it was “arrogant” of him not to issue an apology.

Mr Cummings has faced calls to resign after breaching lockdown rules to take his children to his parent’s house in Durham.

More than 36,000 people have now died in the UK due to the virus, with around 250,000 confirmed cases in this country alone.

Mr Johnson defended Mr Cummings’ actions and said that after face-to-face interactions with his aide, he had followed the instincts of a father.

A Good Morning Britain poll conducted today revealed that more than 80 percent of viewers believed Mr Cummings should be sacked. 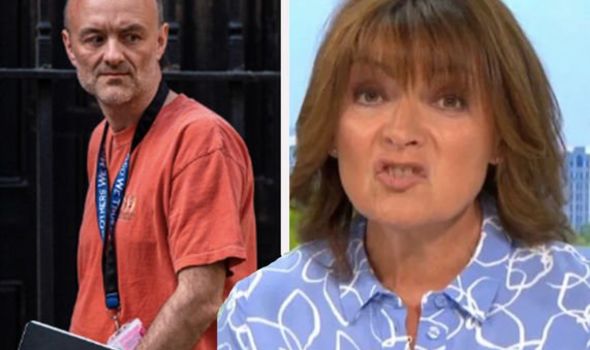 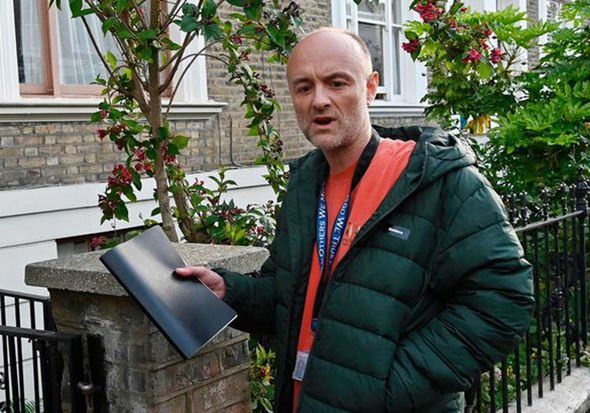 When asked what she thought of the incident, Kelly explained she was not shocked by the result of the GMB poll.

Kelly remarked: “Not at all. What I think is really shocking about it – no apology! The arrogance is breathtaking.”

“A blanket refusal to accept what has happened here… it might not look great,” Shephard replied.

Kelly added: “Do they not think that when the spin doctor becomes the story that it’s time to go? 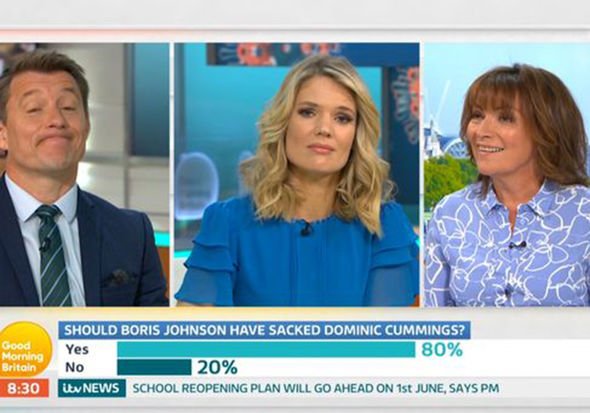 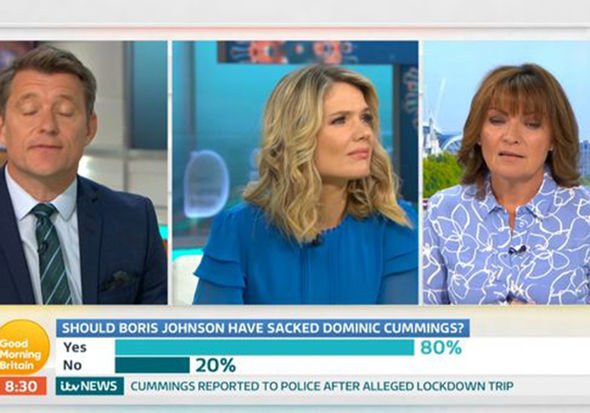 “That’s always been the case in the past but clearly not now. And I can clearly understand why people are so angry.”

Kelly also spoke to ITV correspondent Jonathan Swain, telling him she felt a “lack of apology” was dangerous.

Mr Cummings returned home last night after meeting with the Prime Minister to a number of neighbours and people who had gathered outside his home.

A video circulating social media shows Mr Cummings walking down his road as neighbours shout at him.

Talking about the video, Kelly said: “It’s like Game of Thrones,” before later adding: “The astonishing thing is there has been no apology, no humility, just arrogance.

The UK is currently heading into its tenth week in lockdown with a huge number of people unable to be with their dying family members during this time in a bid to stop the spread, which has sparked outrage.

Fans were divided by Lorraine’s remarks today and took to Twitter to discuss with one viewer commenting: “@ITV So Lorraine Kelly suggests that those fined for breaking lockdown now appeal, I don’t agree with what Cummings did but that is not the answer, they also did wrong along with quite a few others!”

Another said: “Dominic Cummings neighbours are shouting at him to resign in the street, and Lorraine Kelly compares it to..wait for it “something out of Game of Thrones” #gmb.”

A third explained: “Crikey even @reallorraine is critical of Dominic Cummings – she’s normally neutral on arguments giving both sides equal hearing but the fact she is so disgusted at Dominic Cummings not even offering an apology says how the nation is feeling today. #Sackcummings.”

Good Morning Britain airs on ITV weekdays at 6am.