The Doc Martin star appeared relaxed as he joined the Good Morning Britain hosts via video link to talk about his tea party with his pooches. Martin is trying to raise money for the Guide Dogs’ charity with the venture and spoke about why it meant so much to him but as he did so, viewers couldn’t take their eyes off his pyjamas.

Piers Morgan and Susanna Reid were quick to ask Martin about why raising money for the charity was so important.

Martin, who was dressed in pale blue striped pyjamas, replied: “Quite simply, you have a picture with your dogs and your friends and your cats or whatever, having a cup of tea between three and four this afternoon and putting it on your social media.

“They’ve got a Twitter and Facebook account for Guide Dogs so you can send it to them and they are aiming to get a Guinness World Record.

“While you are there you get a wonderful opportunity to donate. 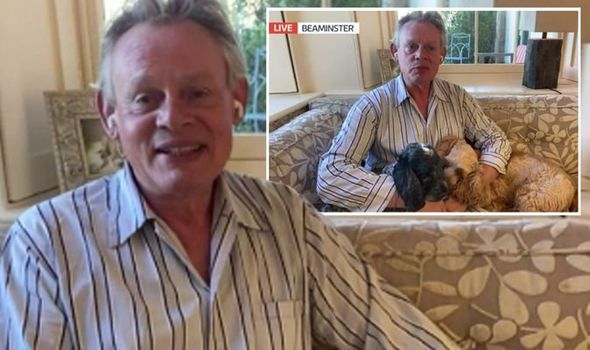 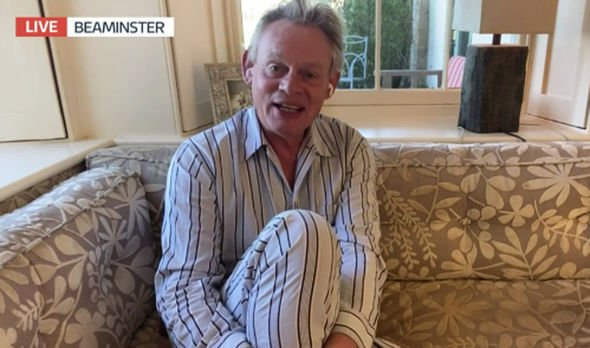 “Heidi here, our sweet little dog, is losing her eyesight, she’s got her own little guide dog in the form of her idiot son Bob Jackson here, who never leaves her side.

“She bumps into him and bumbles along.”

As Martin talked about his pet pooches and the charity, viewers rushed to Twitter to comment on his choice of clothing with many thrilled to see him in loungewear.

“Finally somebody honest enough to appear in PJs. Let’s face most of us are still not dressed #gmb,” one viewer wrote. 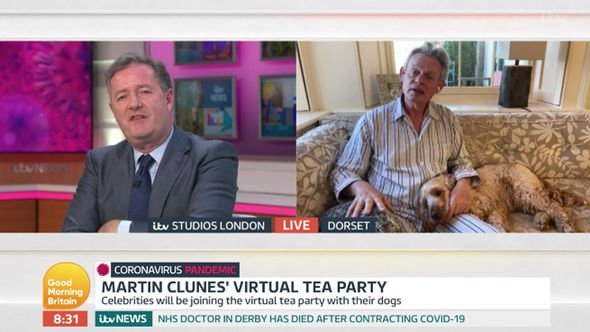 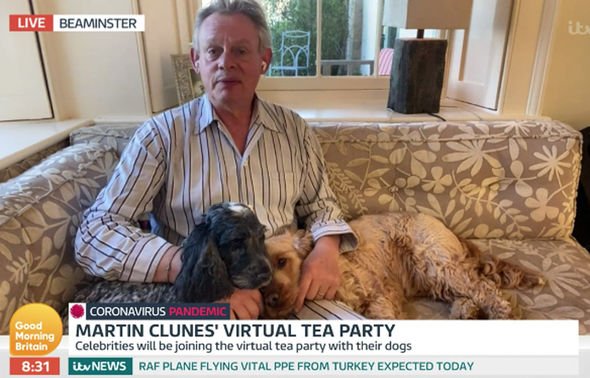 Another added: “Martin Clunes is in his pyjamas with a bundle of dogs. Lockdown telly is amazing. #GMB.”

A third shared: “Love how Martin Clunes just cba to get dressed ahaha. What a legend. #gmb.”

“Martin Clunes forgetting his morning meeting on #GMB and scrambling to join in his pj’s is literally me every day in lockdown. Has made my day,” someone else tweeted.

A fifth commented: “Martin Clunes doing an interview in his pyjamas with his dogs is an absolute mood. Love it #GMB.”

Addressing his PJs at the end of the interview, Piers asked why he had chosen the attire.

“You know, I have no access to the make up I desperately need so this is how you find me,” Martin laughed, clearly unfazed by the frenzy he had caused online.

The hosts were also keen to ask about Martin’s wife Philippa Braithwaite, who experienced coronavirus symptoms.

“Your wife had a few symptoms, how has she been doing?’ Piers asked.

Martin replied: “She is much better than you every much, we locked Philippa away for a bit.

“It was scary but we had to clear the farm of people who worked here.”

He added that the family are doing well and had even enjoyed a takeaway Sunday Roast at the weekend.

Good Morning Britain airs weekdays on ITV at 6am.