Matthew Wright and Janet Street-Porter joined Holly Willoughby and Phillip Schofield for their daily segment on the latest news headlines. After discussing the topics of the day, The Wright Stuff presenter had a huge shock in store for the This Morning hosts as he unbuttoned his shirt to reveal he was wearing the same white bikini he debuted on I’m A Celebrity..Get Me Out Of Here!

Earlier in the show, the iTV presenters showcased some of the most memorable moments of I’m A Celebrity.

The roundup included Ashley Roberts struggling to understand her British co-stars and Joey Essex learning to tell the time.

But instead of showing Myleene Klass’ infamous shower scene, the hosts decided to give viewers a reminder of Matthew’s iconic take.

In 2013, Matthew recreated Myleene’s shower scene by giving himself a wash in a white bikini identical to the singer’s. 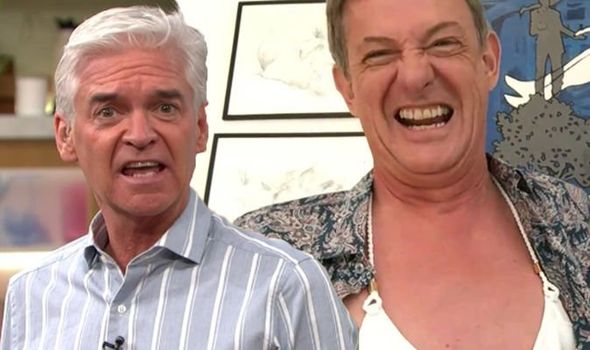 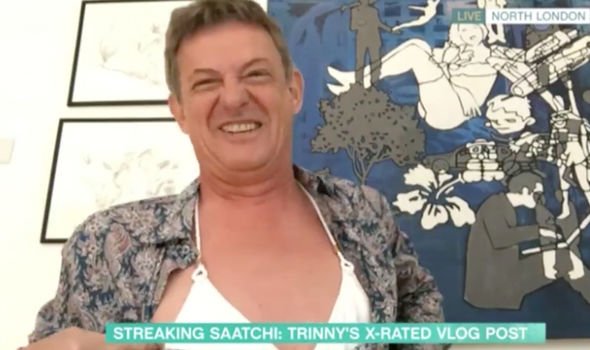 While Joey Essex looked on in fits of giggles, Matthew stripped to a white bikini and gave viewers an eyeful.

Later on, when it was time to wrap up Matthew and Janet’s discussion, the cheeky presenter couldn’t resist flashing the bikini from his jungle days.

Finishing off the headlines round-up, Phillip brought their attention to a viral clip of a naked Charles Saatchi wandering into his bathroom.

Trinny Woodall’s partner unwittingly made a cameo during one of her livestreams as she shared her beauty tips with viewers. 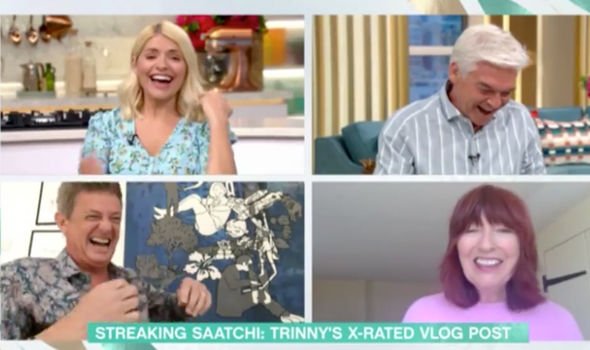 Phillip asked Janet and Matthew whether they were afraid of similar mishaps during their TV appearances from the comfort of their homes.

“They’re dotted around all over the place, people who have been doing their zooms and there’s been something inappropriate on a shelf behind them,” Phillip remarked. “Is it something that worries either of you?”

“Well can I say one thing,” Janet began. “I used to play scrabble with Charles Saatchi and I never saw that part.”

Stripping off, Matthew remarked: “You never know what’s going to pop out.”

Matthew unbuttoned his shirt to reveal he was wearing the white bikini from his jungle shower scene.

“I saw what you did earlier!” Matthew said as Holly, Phillip and Janet burst out laughing.

Horrified that the presenter still had the bikini in question, Holly hit out: “I can’t believe you kept that bikini as well, like a little trophy.”

“There are some things you just can’t unsee,” Phillip remarked.

While another saw the funny side and wrote: “@Matthew_Wright made my b****y day #ThisMorning.”

This Morning airs weekdays on ITV at 10am.