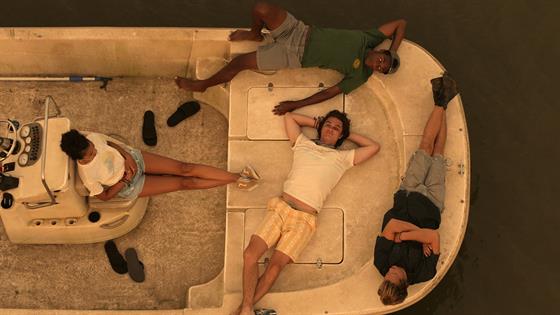 Need a vacation from your social distancing? Head to Netflix’s Outer Banks. Let series star Chase Stokes take it away:

“It’s four friends who live in this kind of crappy part of town called the Cut. While they’re living there, a hurricane comes and knocks out all the power. They find out that there’s a shipwreck that my dad has been trying to find for a number of years…that sunk with $400 million in gold. After my dad’s been missing, we find a certain clue that could lead us to either where the gold is or find my dad,” Stokes told E! News’ Lilliana Vazquez.

The series is filled with mysteries, forbidden romances and everything fans of teen dramas love. It’s been described as a mix between The O.C. and Goonies, and that’s exactly why Stokes originally passed on reading for the role.

“The thing is, I love the Goonies so much that sometimes when you see reboots happen and they don’t hit as hard as they should. And with the Goonies, it’s such an iconic piece of cinema and it’s so beloved by so many people, so when I saw it, I was like, ‘I don’t want to do that. I don’t want to be the guy responsible for destroying a cult classic film,'” he said. So, he passed, but then got the audition from another casting director and he read the pilot script and realized it’s not a new version of Goonies. “I read it and I was like, ‘Oh, this is not the Goonies. I made a giant mistake back in February,'” he said.

Click play to hear more from Stokes and costar Madelyn Cline, who he’s quarantining with, in the video above.