[Editor’s Note: The following interview contains spoilers for “Ozark” Season 3, including the ending.]

Two major challenges loomed over Janet McTeer when approaching the third season of “Ozark.” One came with her promotion to series regular, as Helen Pierce, the Navarro drug cartel’s imposing attorney, grew from a mysterious representative for her boss’ malevolent bidding to a flesh-and-blood human being with lives both professional and personal. How could McTeer retain Helen’s frightening aura when the curtain was pulled back on her most relatable moments?

“That was a challenge for sure, and one of the things I was most concerned about,” McTeer said in an interview with IndieWire. “If you start finding out this person washes dishes and gets her kids off to school on time and does all the things that normal parents do, will she lose her mystique from a dramatic point of view?”

McTeer, being the twice Oscar-nominated professional thespian she is, looked at Helen’s overarching role to find the right balance.

Throughout the season, Netflix viewers see Helen walk a fine line between honest relationships and their hidden motivations. Her ex-husband tries to take custody of their children while Helen manufactures a fun summer vacation for her daughter, Erin (played by Madison Thompson). Of course, they’re not on vacation. She’s keeping an eye on Marty (Jason Bateman) and Wendy Byrde (Laura Linney), the couple laundering her cartel boss’ money.

“So Chris Mundy, the wonderful showrunner, said, ‘One of the things about ‘Ozark’ is that it is about families and about how they compartmentalize,’” McTeer said, referencing the Byrde family of four, the Langmore clan led by Julia Garner’s Ruth, as well as the Snell crime family and even the Navarro drug syndicate. “You have to [look at] how they all do this job and [protect] their families. They wanted to bring my character into that, so they bring my daughter in, [and] you see the compartmentalization of someone who does not tell her children what they do for a living, as well as the ramifications of that.”

Considering how aware the Byrde children are of their parent’s misdeeds, Helen’s efforts to shield her family from her work offer a nice juxtaposition for the familial theme. But believing she can separate the two sides of herself also indicate just how confidant, capable, and intelligent Helen can be, which means she also has to be ahead of the curve at all times. 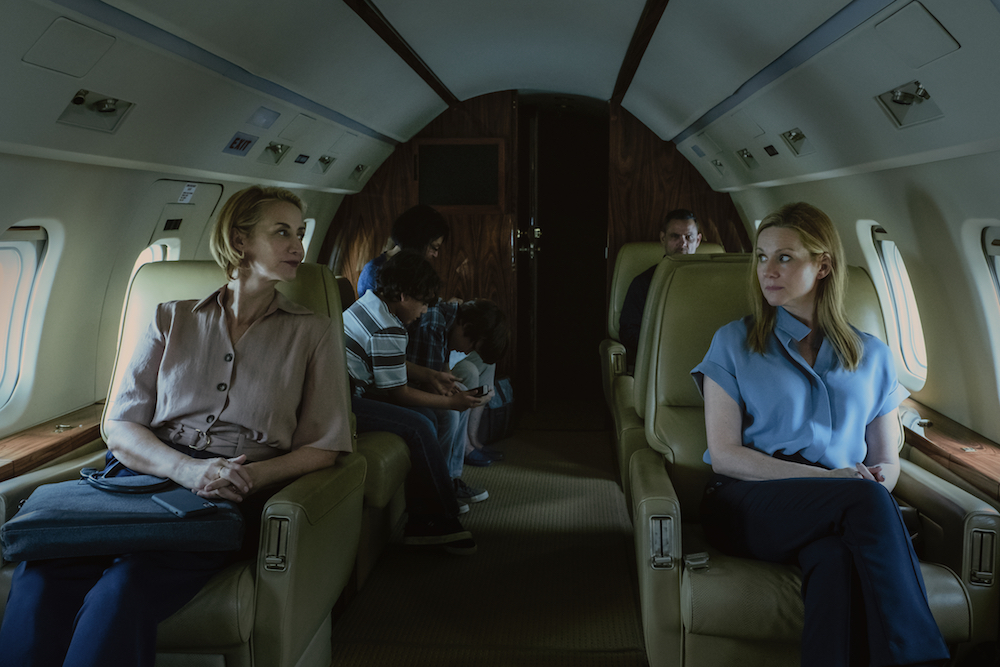 McTeer remembered Mundy telling her that Helen was always the smartest person in the room — “Since all of those [characters] are really smart, I would just try to look intelligent in the background and hope for the best,” McTeer said — which made forging real connections difficult. During Season 3, she tries to bond with Wendy, but the combination of work and child conflicts fracture their budding friendship. (McTeer and Linney didn’t bring any of those troubles off set; the two shared a house during a production, and McTeer has nothing but praise for her “Ozark” cast and crew.)

The past tense in McTeer’s previous statement brings us to the second challenge facing the actress this year: how to talk about Helen now that fans have seen Season 3. [For those who ignored or missed the spoiler warning above, this is your final notice: spoilers ahead.]

“You know, that’s tricky,” McTeer said, when asked about Season 3’s final scene. “Because if you mention anything to do with that, then that blows the end of the season. I’ve been saying we’re not sure [and] we don’t know when we’ll start filming the next season — [that’s] my official line.”

The final shot of Season 3 is jarring, violent, and even grimly funny, but those who’ve seen it know they probably won’t see Helen again in Season 4. McTeer was asked specifically not to talk about what could be her last scene, let alone predict whether she’ll return for a potential Season 4 (which Netflix has not yet formally renewed) via flashback, apparition, or some other unexpected form.

Instead, McTeer just wants people to watch the episodes play out. Given the time and effort she put into the character, letting her work speak for herself is a choice as assured and professional as Helen herself. And it also demands we ask and answer our own questions about the character’s fate.

Even though Navarro turned on her, Helen would’ve made a reasonable, if not preferable, alternative to the Byrde family, and it remains unclear exactly why the cartel lord chose the volatile Marty and Wendy over his ever-reliable attorney Helen Pierce. She was, after all, the ideal representation of an all-powerful man: brilliant, imposing, and well-suited to face the public. A credit to the actress’ thoughtful nature, McTeer maintained Helen’s mystery all the way to the end.

“Chris and I talked about it back in Season 2: How did she end up like this? How did she get there? How did it evolve?” McTeer said, recognizing the writing staff for never pushing her too far into domesticity. “Had they come out and said, ‘Oh, she was a schoolteacher. She taught piano lessons. And she was a gymnast!’ I might’ve said, ‘No, I can’t say that.’”

“Ozark” is streaming now on Netflix.