Like an FBI Agent on the take, “Ozark” is a crime drama working against itself. The Netflix original series from creators Bill Dubuque and Mark Williams, steered by showrunner Chris Mundy, tracks a family on the run, except there’s nowhere for the Byrdes to go. Marty (Jason Bateman) and Wendy (Laura Linney) made a deal with the devil when they agreed to launder money for a Mexican drug cartel, and their insurmountable debt is steadily drowning them both. “Ozark” rightly sees its core married couple as dead folks walking, and yet it still has to find believable, evocative, and compelling ways to keep them alive and kicking for one or two or 10 more seasons. (Please don’t let this be the first Netflix series to last 12 seasons.)

Season 1 relied on shock and awe to great effect, throwing audiences into the deep end of the pool while knowing it was a one-way trip. Grounded by the cast’s stellar performances and a fascinating specificity for the illegal trade itself, “Ozark” blended fear with action, as bodies fell from balconies, heads were blown off in kitchens, and plenty more abrupt bits of violence helped turn the bleak tragedy into a surprising and propulsive thriller. Then Season 2 treaded water. With the Byrde family settled in their new central Missouri home, not enough drama was generated by flat, predictable character additions (let us never speak of Cade again), and all that political lobbying couldn’t compare to Money Laundering 101. “Ozark,” once built on immediate peril and felt too content to just buy more time.

Season 3 finds a happy medium. The fresh set of 10 episodes reengages with the Byrdes’ descent, as Marty and Wendy spend the first five hours battling each other. They both try to do what they think is best for the family, but their opposite instincts are an appreciable mix of selfishness, panic, and fantasy. Each thinks they know better. Each thinks they’ve found the path to safe harbor. And while watching Bateman and Linney go toe-to-toe is excellent entertainment on its own, Season 3 doesn’t dwell too long on these obvious self-delusions. Mundy & Co. strip them away in the second half and lean back into their shared terror. While there’s still plenty of fat to be trimmed (and too many missed opportunities for heartier conflict), “Ozark” Season 3 gives viewers just enough air to make losing it again hurt so good.

You’ll find no spoilers in this review, but here’s the groundwork for Season 3: Picking up six months after the Season 2 finale, Marty and Wendy have their riverboat casino — “The Missouri Belle” — up and running. Ruth (Emmy-winner Julia Garner) is managing the daily operations, and the Byrdes have made peace  with the Kansas City mob, led by Frank Cosgrove (John Bedford Lloyd) and his trouble-making son Frank Jr. (Joseph Sikora). They help legitimize and insulate the casino’s business, which is doubly important while Marty searches for an FBI mole he thinks is already among their staff. 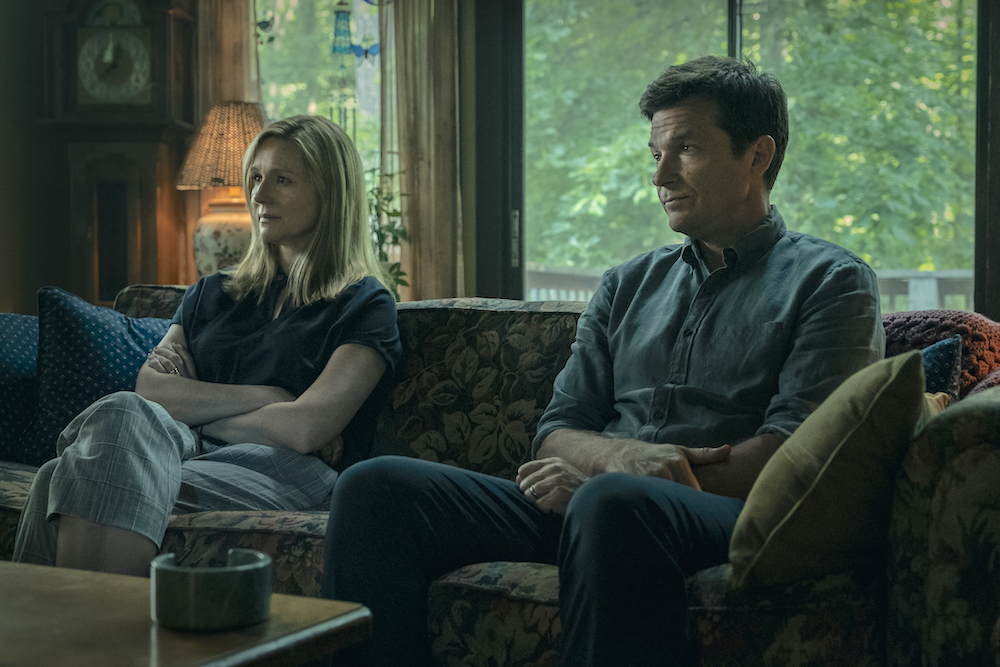 But there’s a bigger problem: Marty won’t launder any money. Too afraid of what he doesn’t know, the numbers-cruncher is infuriating his cartel boss Omar Navarro (Felix Solis), their lawyer Helen Pierce (Janet McTeer), and his wife, Wendy, who all know the risk inherent to their work and want to move forward. This is just one of the sticking points that Marty and Wendy try to work out in couple’s counseling, a weekly appointment they keep at the behest of their kids. As Marty frets, Wendy grows more and more ambitious, and it’s a treat to see Linney tear into the same tough decisions that lead to the same incomparable highs and lows Marty has already faced.

Season 3 puts Wendy in the spotlight (especially when her brother comes to town), but it stops short of taking her side. Really, there are no sides: Marty and Wendy are caught in the middle of a three-way war. There’s the cartel they work for, the FBI they’re trying to outmaneuver, and then a second cartel who’s trying to destroy the first. Adding an unpredictable game-changer like a cartel war is one of the producers’ smartest decisions — at any time, a random attack can push Marty and Wendy one way or the other. Maybe they think their boss is going to be killed, so they start stalling. Maybe they have to do some unexpected dirty work to help him out. Maybe there’s just one more thing they don’t know, and it drives them that much crazier.

Even with a lot of the right pieces in place, “Ozark” remains short-sighted in how it manufactures drama, relying far too often on quick positional pivots and bad decisions to generate immediate conflict, rather than building long-term arcs with more satisfying payoffs. At least a handful of the most memorable scenes depict the cartels’ violent attacks, but they’re not necessary — they don’t involve Marty or Wendy, and they only remind viewers of the violent world outside of the Ozarks. Similarly, certain characters are given far more screen time than they need (we didn’t actually need to see Navarro, given the cartel lord’s ominous, unseen presence is far more frightening than any flesh-and-blood man), and episodes feel bloated as a result. (It’s not as noticeable as the way over-extended second season, but six of the 10 new episodes run 60 minutes or more.) Worse still, the later episodes set up one of the biggest, most anticipated conflicts of the series… and then just casually toss it aside in favor of a quieter, more character-driven choice.

If “Ozark” had a bit more foresight, it could have both. Season 3 is a marked improvement over Season 2, dialing up the pressure and tossing in just enough surprises to keep the audience on their toes. It’s engaging, well-acted (Linney and Bateman really are spectacular), and the moody blue and green color palette remains an incomparable tone-setter. Still, there’s un-mined drama in these murky waters. After three seasons, “Ozark” has developed a pattern of introducing new characters just to kill them off. Sometimes those deaths feel meaningful. Sometimes they feel like filler. But one thing is clear: The show only comes alive when Marty and Wendy are forced into action, even if everyone knows they’re never getting out of this lake.