Fans of Ozark are hoping the gritty crime drama will be returning for another outing. However, Netflix has yet to official confirm season four, leaving viewers to speculate where the story could go next. Some audience members have been wondering about the stoic assassin and whether he could be turned and work with Marty (played by Jason Bateman) and Wendy (Laura Linney).

Will Nelson betray the Navarro Cartel?

WARNING: This article contains spoilers from all seasons of Ozark

Nelson has remained steadfast in his loyalty to the Navarro Cartel, bumping off numerous characters who have got in the way of Mexican drug lord and his illicit operations.

Among the fallen was Cade Langmore (Trevor Long), who met a tragic end in season two on the orders of Wendy. 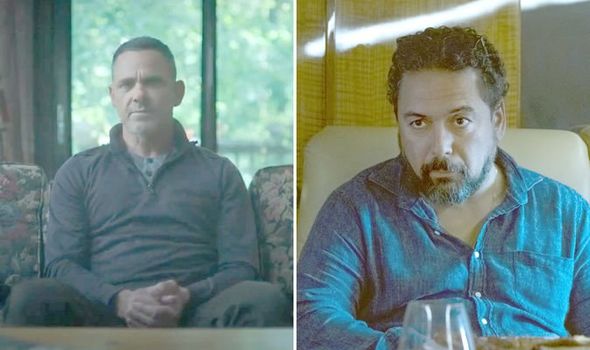 Reflecting on whether Nelson could take out drug kingpin Omar Navarro (Felix Solis), the American actor said: “This is a remarkably interesting question.

“Can we imagine what it would take for Nelson to betray the man who designed and created him?

“I mean if anyone could have turned Nelson would it not have been Helen?”

The star continued: “I doubt it could happen but if it did, I imagine it involving a woman or perhaps a child.

“I think about some of the reasons a person would betray someone they respect, admire or even marvel at and I feel it would have to be heavy.

“I hinted at it earlier when I mentioned whether Nelson had a moral or spiritual line, one he would never cross. Could Nelson take out one of the Byrde kids, or Erin.

“Perhaps he secretly grows feeling for Wendy or God forbid Ruth when the order comes through. Those things sound interesting. And very bloody.”

While all of this is simply speculation, there could be scope in the right circumstances for Nelson to kill Navarro, but it would be highly unlikely.

Also, Nelson would be put in a very precarious position, and given the brutal world of Ozark could end up dead very quickly.

If season four does get the green light, Nelson could have a bigger role to play after killing Helen.

He’s slowly racking up lots of enemies with Ruth Langmore (Julia Garner) high up on the list of those who probably want him dead.

Jonah Byrde (Skylar Gaertner) could also want revenge for Ben’s murder, although his rage could be directed at his parents who ultimately gave the kill order.

So, there are plenty of candidates who wouldn’t hesitate to do the deed.

Whether Nelson could be biting the bullet, Bonilla said: “No one is ever truly safe.

“Death can be around the corner for anyone. It is simply a matter of timing and opportunity.”

Bonilla added: “I guess you can throw some luck into it as well. I just hope it is epic.”

Fans will have to wait and see how things pan out, but one thing is for sure, Ozark is never predictable.

Ozark season 1 to 3 are streaming on Netflix now