Phillip Schofield, 59, was left in disarray on This Morning as he didn’t seem to realise what programme he was hosting. Joined by Holly Willoughby, 39, the host was on hand to help another ITV viewer land some cash prizes as they played Spin to Win. However, Tuesday’s game seemed to get the better of him as the presenter became rather excited about what the caller had managed to get their hands on. As he went to talk through the second part of the competition, he made a slip of the tongue as he thought he was starring on Good Morning Britain.

As are the rules of Spin to Win, when the caller picks up the phone, they must answer with a specific code word instead of saying “Hello”.

Tuesday’s participant passed the first past of the challenge and was then given the chance to win a prize from a section of goods pinned to a giant wheel.

After Phillip span the studio prop, the viewer managed to get their hands on £2,500 worth of garden furniture.

However, the players always get the chance to win the bag of “shizzle” on offer, packed with branded novelty gifts from the show.

Overcome with excitement as he unveiled the new additions to the goodie bag, the host was called out by Holly for his blunder about which programme they were working on. 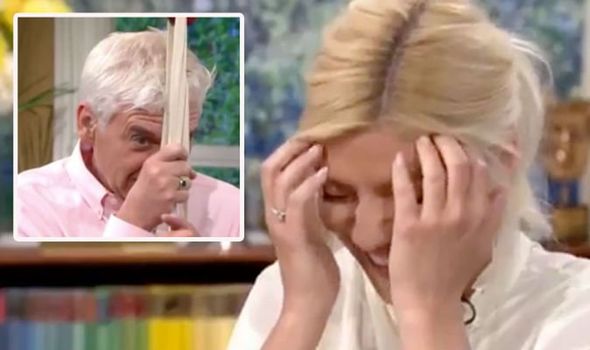 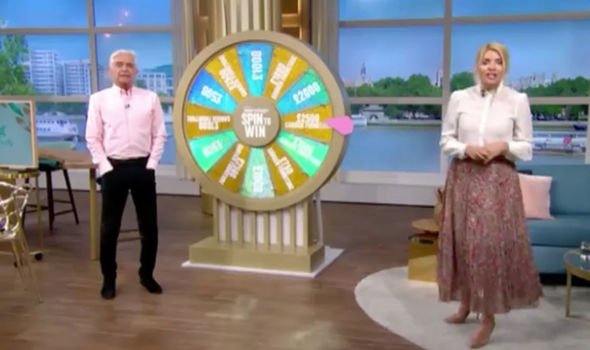 “We’ve started putting something slightly different in it because quite frankly we were getting bored of the same old stuff,” Phillip began.

As the bag lowered into his hands, the host continued: “We’ve got all the Good Morning [Britain],” before stopping in his tracks.

“What show am I on?” he joked before Holly reprimanded him by asking: “What show do you work on?” as her co-star looked rather embarrassed.

With the crew in the studio and his co-host laughing at his expense, the presenter grabbed hold of the bag and declared: “Take me up!” 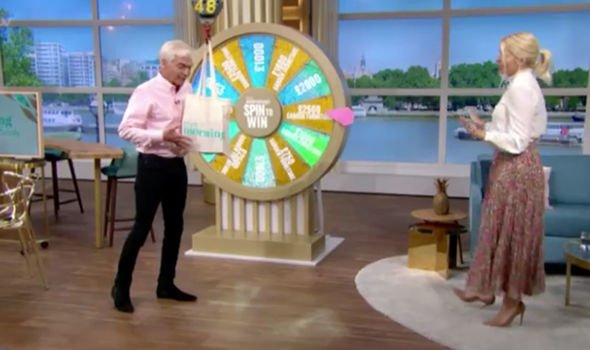 What show am I on?

“Take me up!” he pleaded before carrying on with the rest of the segment and explaining what was in the bag.

The matter wasn’t brought up again, with the caller going on to win the bag when she correctly identified the first guest on Tuesday’s show was Hollywood actor, Russell Crowe, 56.

However, this interview didn’t go to plan either as the movie star was delayed in speaking with the presenters.

Kicking off the show, the pair had to explain they were going to be showing viewers a whole array of puppy pictures as their guest was late.

When Russell was finally ready to speak with them via video call from Australia, the hosts wrapped up the segment.

Finishing up by looking at a Cock-A-Chon puppy, Holly declared she rather liked this breed but made the name sound rather rude.

The hosts struggled to hold their composure, Phillip’s co-star said: “I hope Russell can’t hear us.”

“If you’ve never watched this show before and lockdown has driven you to this, then welcome,” her co-star quipped.

Taking to Twitter, those watching at home were left in hysterics over the presenter’s slip of the tongue.

One viewer posted: “So funny. He is a cute little dog. I like This Morning. Holly & Phil are so much fun & always laugh. Very uplifting.”

Another added: “Oh Holly,” followed by two laughing faces, with a third sharing: “And @russellcrowe heard too!!”

The Hollywood actor mentioned the comical moment before his interview even begun, leaving Holly embarrassed once more.