Piers Morgan, 54, was on hand to present today’s edition of Good Morning Britain alongside news anchor Charlotte Hawkins, 44, and resident health expert, Dr Hilary Jones, 66. Matt Hancock, 41, spoke with the presenters about the ongoing coronavirus outbreak hitting the UK and tried to give perspective on how the government was trying to prevent the spread. During the interview, however, the politician was left squirming as he clashed with the host on several occasions. 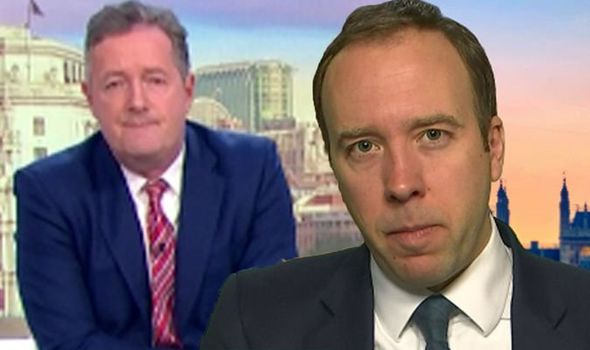 One of the main queries Morgan had was about whether Prime Minister Boris Johnson, 55, was going to “lockdown” the country as people continue to struggle with social distancing.

As the Health Secretary claimed the Government’s position had been the same all along, the host strongly disagreed.

Raging about the “herd immunity” plan which was suggested at the beginning of the outbreak before social distancing was implemented, the presenter claimed the politician was “insulting his intelligence”.

The host declared the stance had “dramatically changed” as he continued to cut off the politician who was trying to provide an answer.