The need for authentic storytelling takes more than just a screenwriter. Outside research, good intentions, and personal experience come together to tell a story that can, hopefully, influence and inspire others to see themselves reflected in a piece of popular culture. Authentic representation should allow for more stories to take flight, and such is the case with the relationship between Define American and The CW series, “Roswell, N.M.”

“Roswell, N.M” is a reboot of the television series “Roswell” which aired on the then-WB Network from 1999-2002. The teen drama followed a group of high schoolers, four of whom were alien survivors from the infamous 1947 UFO crash. But it’s immediately clear how the original series reflected a time before prominent calls for diversity. The book series cast its heroine as a Latina, but outside of her last name there was nothing about the character that emphasized her roots. So it was understandable that, when the original series creators couldn’t find a Latina actress for the part, they cast American actress Shiri Appleby instead.

“Roswell, N.M.” showrunner Carina Adly MacKenzie said in an interview with IndieWire she didn’t go back to the novel to tell her story.

“Before I even knew she was Latina in the novel [I knew] I was not interested in telling a story with a white protagonist.”

In starting work on the production, MacKenzie realized this wasn’t her story to tell. The plotline focuses heavily on the immigrant experience, as depicted through series heroine Liz (Jeanine Mason) and her father, Arturo (Carlos Compean). MacKenzie turned to Define American for help consulting on the plotlines involving immigration.

Founded in 2011 by Jose Antonio Vargas, Define American looks at the concept of who gets to be American or defined as such in media.

“There are so many people who are born here or who have legal status [who] are still not necessarily considered American, and they are American,” Elizabeth Grizzle Voorhees of Define American’s entertainment media team said. The company has worked on over 60 projects in the entertainment landscape, moving beyond accuracy in storytelling toward actively working with content creators to expand and humanize immigration storylines.

“I needed to make sure I had the support,” MacKenzie said, “so that I felt like I was including the perspective of people who are actually going through this and facilitate their story, and use my privilege to make sure those with less privilege get heard.”

When it comes to “Roswell, N.M.” specifically, Define American jumped at the opportunity  to showcase Arturo’s journey as an undocumented immigrant who, in this season, is on the road to citizenship. Aiming for authenticity at all times, they also were fascinated by how the science-fiction genre could become a conduit for social commentary.

“[‘Roswell, N.M.’] at its core is a parable or allegory around the immigrant experience, particularly for people who are forced to live in the shadows. What does that look like?” Define American media team member Noelle Lindsay-Stewart said. “[Sci-fi] encourages you to look beyond your own purview in a really subversive way. […] It’s a great way to bring in an audience who not necessarily care about immigration as an issue.” 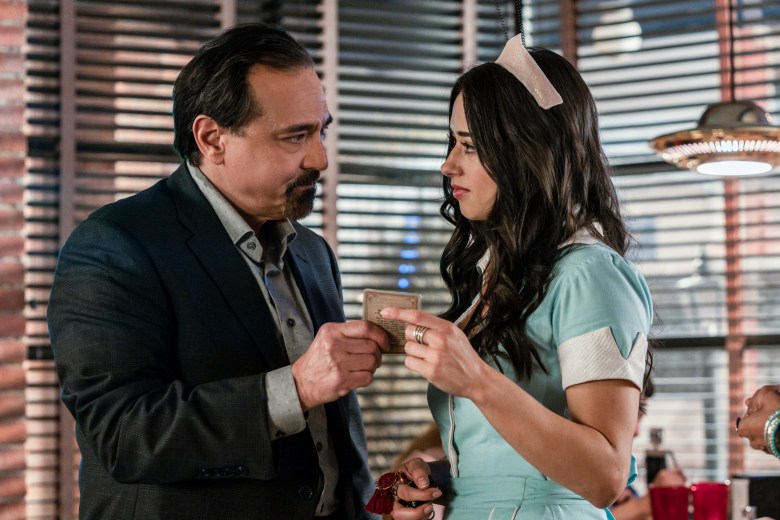 Define American was an active participant in the “Roswell, N.M.’ writers’ room, helping MacKenzie and crew break down two seasons of story. Typically, Define American employs “undocumented arts activists” — among others — “who will come in and share their stories and talk about their lives” to help provide context to the story, per Voorhees. For MacKenzie, this insight was crucial.

“We don’t specifically say, ‘Today we’re tackling this issue.’ […] We are telling stories that feel natural to our audiences,” she said. But she also understands her privilege as a white woman without that personal experience. In fact, as Mason herself said, the exploration of white privilege forms her favorite episode of the year.

For Mason, part of what attracted her to the role of Liz Ortecho was seeing a Mexican-American who is smart, articulate, and knowledgeable be the story’s protagonist. Being a Cuban-American whose parents were asylum seekers, she understood her own privilege in having a more positive immigration experience. Outside of the show’s collaboration with Define American, Mason worked with an organization called This is About Humanity which visits Tijuana-based shelters housing people working towards citizenship.

Through conversations with these Mexican immigrants, Mason heard their stories of trauma and anxiety.

“They have a constant fear and they feel like they’re on unsteady ground,” she said, adding that she passed these stories on to MacKenzie. “I remember saying to Carina [that] I wanted it to feel like every day there’s a possibility this could be her worst day; that this could be her worst nightmare realized. Her whole structure, all of the stability in her life, her family unit can crumble and can be taken away from her. That’s an ever-present danger.”

MacKenzie emphasizes that “Roswell, N.M.” isn’t breaking any new ground with regard to immigration, but they are focused on promoting diversity and authenticity in every facet of their storytelling. For Define American, “the role that history, that media has played in how people are treated in their everyday lives is critical,” Voorhees said.

Without genuine stories promoting the positivity of difference, it’s often easy for society to treat others poorly — you don’t know what you don’t know about — and with The CW catering to younger audiences, Lindsay-Stewart said there’s an opportunity to “reach young adults before they’ve fully formulated their ideas about immigrants and immigration.”

There’s proof in the pudding to this message. Mason said that during production on Season 1, she and co-star Nathan Dean Parsons went to a Santa Fe coffee shop during a break.

“We get our coffee, sit down, and this girl comes up with her mom. She’s super shy and they’re a Mexican-American family,” she said. When the young girl asked Mason for her autograph the actress assumed it was for a past role, considering “Roswell, N.M.” didn’t have promotional material out. “Her mom told me that she sat at the back alley [where the series was shooting] and she watched for hours.”

Mason said that moment cemented everything the series was doing.

“This is how exciting it is to feel represented. We forget what that feels like, and this little girl is so excited to see herself reflected — to see her literal home reflected.”