It’s Ted Lasso like you’ve never seen him before 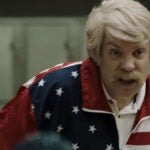 There are also some fun inside jokes/Easter eggs for fans of the Emmy-winning series (which wrapped up its second season earlier this year), like when Jeremy Swift calls after Nick Mohammed and says, “Never change,” a hat-tip to Nate’s heel turn this season.

And while it probably won’t totally scratch your “Ted Lasso” itch, this animated short is nicely animated and very funny, a little Christmas treat to tide us over until season 3 drops sometime next year.