Spoiler alert! Do not proceed if you haven’t watched Ted Lasso season 2, episode 4, “Carol of the Bells.”

Perhaps only Ted Lasso could bring the chilly joy of Christmas into the overheated doldrums of mid-August and make it feel perfectly-timed — and the beloved comedy did just that with this week’s episode, titled “Carol of the Bells.” (The episode even featured a special title sequence, with claymation renditions of the cast!)

For the AFC Richmond family, the holiday began with everyone in a different place: Keeley (Juno Temple) and Roy (Brett Goldstein) had their “Sexy Christmas” plans waylaid by Roy’s niece, Phoebe (Elodie Blomfield) and a dental emergency), Ted (Jason Sudeikis) needed some cheering up after FaceTime Christmas with his son ended too soon thanks to his “overpriced guilt gift,” and Rebecca (Hannah Waddingham) was there to do just that, skipping an A-list shindig at Elton John’s house to take the coach along on her benevolent Secret Santa adventure.

However, in the true spirit of Christmas, the team ended up together. After Higgins (Jeremy Swift) revealed earlier in the episode that he opens up his home on Christmas to players who are celebrating away from their families, the “Family Higgins” get their biggest turnout yet, with a majority of the team’s foreign players turning up for dinner, followed soon after by Rebecca and Ted.

And while many episode of Ted Lasso culminate in moving words from the titular coach himself, it was Higgins who got a chance to shine at Christmas, toasting each of the players hometowns and the team that brought them all together.

“I know you’d have preferred to be with them, but it was truly an honor to have you with us to share our traditions and help make a few new ones,” he declared. “To the family we’re born with, and the family we make along the way. And, most importantly, to Richmond!” 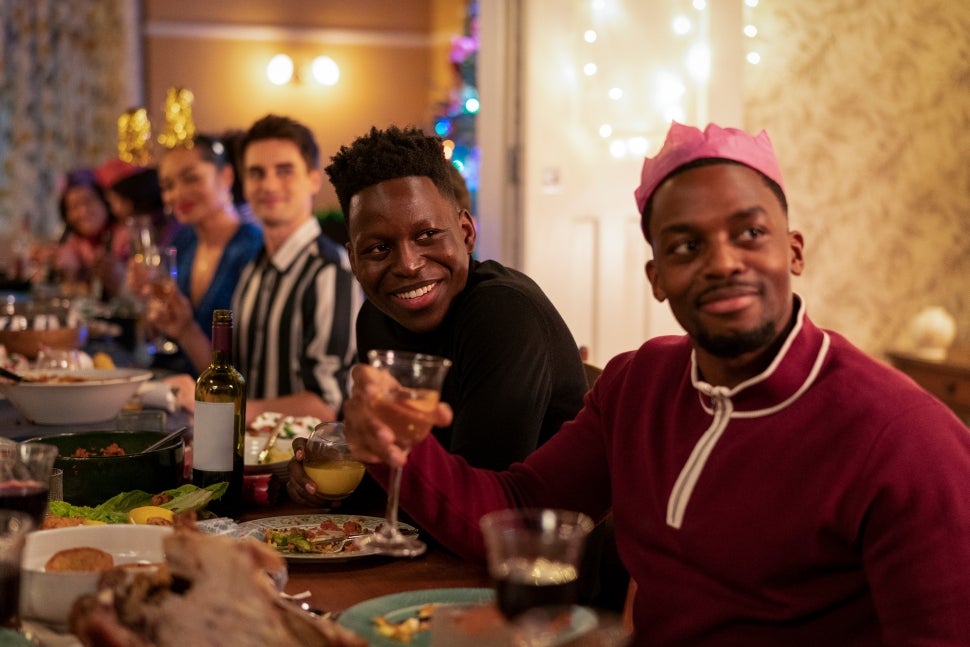 The festivities ended with a snowy dance party in the street, led by Rebecca belting out “Christmas (Baby Please Come Home)” — and truly, anytime we get to see Waddingham flex her incredible vocal chops is gift enough — making the episode an instant holiday classic.

“I loved doing that,” Swift recently told ET of the festive episode. An additional gift for the actor on the set included an appearance from Higgins’ wife, who is played on the show by Swift’s real-life wife, Mary Roscoe!

“We’re so used to being in the kitchen [together], so it’s a bit like that with cameras and a bunch of other actors around. It seems totally normal,” he recalled with a laugh. “I really enjoyed that episode….It was such a laugh to do. And quite a bit of a challenge, because having a lot of people in the scene means a lot of camera moves, having group shots, two shots… A lot of hard work, but a winning sense of fun, as it is on this show.”

Higgins’ role as a paternal figure for the team is indicative of the growth viewers have seen in the character even through a mere season and a half. “He’s often there, and the family are there, to kind of act as a kind of balance to some of the other characters, who are oscillating up and down somewhat,” Swift noted.

But it’s more than that, too. On a lesser show, perhaps, it would have been easy to reduce the character — right-hand man to a boss who spent much of the first season scheming for Ted Lasso’s downfall — to a villainous sidekick, an easy foil to Ted’s good-hearted optimism. But Higgins, in fact, was one of the first people at AFC Richmond to be won over by the Ted Lasso of it all, and all the better for it.

“He’s initially very uptight, he’s on eggshells,” Swift said of his character in season 1. “But he’s taken along by Ted’s positivity. And it’s just so empowering for so many of the characters and Higgins is changed by that, hugely.”

“He becomes empowered, he’s not so tentative about making decisions,” the actor added, sharing how Higgins has already shown major growth in the show’s second season. “He’s given license to make good, sound decisions — like bringing a sports therapist into the fold of the team — and trusted more by Rebecca. And this is all the knock-on effects of Ted.”

Higgins has found not only professional support, but a group of friends in the “Diamond Dogs” — Ted, Coach Beard (Brendan Hunt), and Nate (Nick Mohammed) — who regularly pick each other’s brains about their personal and professional struggles, something Swift points out can be a uncommon social experience among men.

“Actual sort of connecting up, ‘How are you feeling?’ all that kind of stuff is a rarity,” he shared. “And it’s great to have a little of that part of the show with the guys… I think [Higgins] really is taken up along with that, and is touched by people finding his input valuable as well. Even if it seems to him just a few home truths.”

That’s not to say that it will continue to be totally smooth sailing for Swift’s character. In fact, one of the things the actor says he’d like to explore is a “a little bit of backstory” when it comes to Higgins sordid past covering for Rebecca’s adulterous ex, Rupert (Anthony Head), in his various dirty dealings.

“I, for example, don’t know whether Julie Higgins knows what exactly he had to do for Rupert,” the actor notes.

For now, the character and the show continue to earn acclaim both from fans and critics. Swift was recently nominated for an Emmy for Outstanding Supporting Actor in a Comedy, joining castmates Goldstein, Hunt and Mohammed in the category (Waddingham and Temple were both nominated on the women’s side, while Sudeikis also earned a nod in the lead category and the show was nominated for Best Comedy Series.)

“It’s very exciting. I think my nomination is indicative of the look for the show and the fact that so many people have been nominated is the same thing,” Swift said graciously. “It’s very, very nice and amazing for the show. And I think it’s just a manifestation, really, of the fact that all the love for the show has been just building all the time.”