It appears that “Bachelor” alum Demi Burnett is still looking for love these days, despite having quite the dating history. The Texas native rose to fame in 2019 when she competed for Colton Underwood’s heart on Season 23 of “The Bachelor.” According to Distractify, Demi was considered to be the villain of that season and was eliminated from the show. Yet, it was her stint later that year on “Bachelor in Paradise” where Demi really made a name for herself.

While appearing on the show, Demi came out as bisexual and talked about being torn between co-star Derek Peth and a woman, who we later found out was Kristian Haggerty. At the time, Demi confessed to Derek (via People), “I have this girl that I can’t stop thinking about and then I have you, an amazing guy.” Of course, fans know that Demi ended up with Kristian, making them the first same-sex couple to be featured on any “Bachelor” franchise. Demi told Ellen DeGeneres about how she felt coming out, saying, “It was fear of disappointing people in my life, making them uncomfortable. It was just really hard … But, I mean it all worked out in the end.”

Demi and Kristian even got engaged in the season finale, but sadly the relationship didn’t last. Demi revealed (via People), “I kept trying and I kept trying, and I just wasn’t feeling it anymore.” The reality star’s next relationship didn’t turn out as she expected either, but it appears she hasn’t given up on finding the one.

Demi was linked to other Bachelor stars 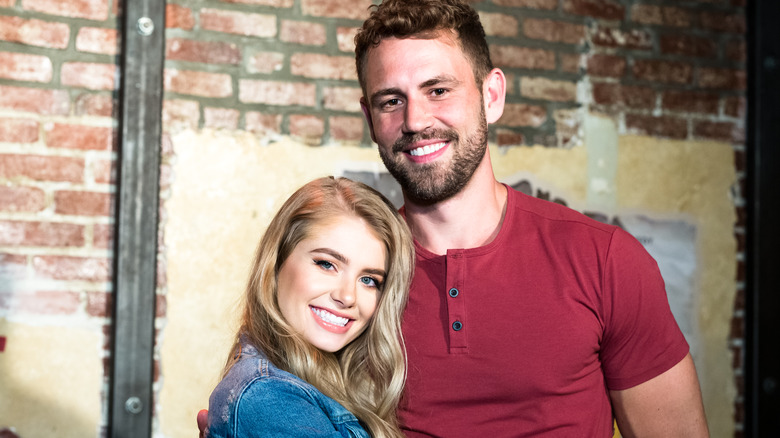 Reality star Demi Burnett made “Bachelor” franchise history with relationship with Kristian Haggerty. Despite their split, Demi wrote that she’ll “forever be proud of the impact our love story has made,” and she hoped it “helped others feel more accepted.” Demi eventually moved on with musician Slater Davis, but a month after telling People that the two were “stronger than ever,” they split. The “Bachelor in Paradise” alum blamed quarantine and trust issues, saying, “It’s toxic on every level, whenever you get to that point where you’re questioning everything each other’s doing.” Yet even after the breakup she revealed, “I love him, I’m crazy about him.”

After that, Demi was linked to another “Bachelor” franchise star Nick Viall after he posted a photo of them together. The two were first linked in 2019, but Nick shut down those rumors, saying (via Cosmopolitan), “Demi is a close friend.” There were also rumors that she was back with Derek Peth when he called her “flawless” in an Instagram comment. But the last person Demi was shipped with was YouTube star Tana Mongeau after the two flirted on twitter.

Spoiler alert. Newsweek reports that the TV personality will try again to find romance on TV when she appears on “The Celebrity Dating Game.” She’ll also return for the newest season of “Bachelor In Paradise,” where she’s been “coupled up” with “Bachelorette” alum Kenny Braasch, according to ScreenRant. So while Demi appears to be single now, it’s doubtful she’ll remain that way for long.