William isn’t sure what’s going on with Emily, and neither are we 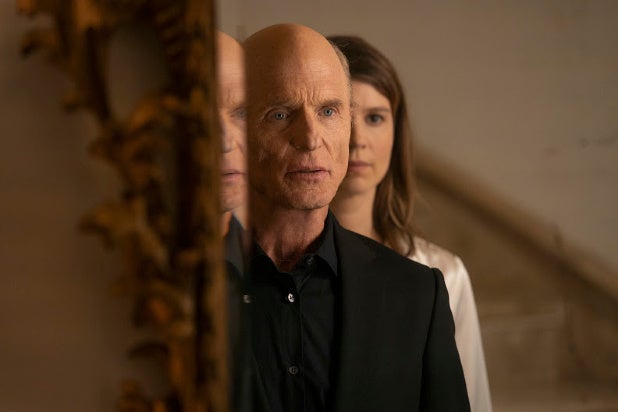 (Spoilers ahead for the April 5 episode of “Westworld” on HBO)

This week’s episode of “Westworld” gave us an answer to the biggest mystery of season 3 thus far. But there’s still four more episodes left this season, and more mysteries to unravel. And the one I’m choosing to focus on at this moment is that of Emily (Katja Herbers).

I don’t know how our priorities will shift moving forward, of course, but it feels very much as though we got a big new nugget to chew on this week. The real Emily, so far as we know, is dead, shot in Westworld by her father William (Ed Harris) in season 2. But the season 2 finale gave us a weird scene at the very end in which she was chatting with William in the wreckage of a Westworld facility, implying heavily that William in this scene is a host. And in the present, Emily popped up this week for the first time in season 3, popping up to torture William as he sits alone in his house trying to get over what he did.

The easy and most obvious way to interpret this whole thing is that she’s a hallucination brought on by William’s guilt and trauma. That is, after all, how William himself interprets her existence. It’s understandable, considering he’s definitely having, at minimum, some weird dreams. And it’s those weird dreams that are part of why I think Emily is not just in William’s head.

The episode opens with one of those dreams. William looks up, sees blood on the chandelier above his head, and then water bursts through the ceiling collapsing it and bringing the bloody chandelier down on him. This is clearly not really happening. But then William wakes up. He’s fallen asleep in the bathtub with the water running, and it’s flooding his house.

And it’s only then that Emily shows up. Not in his dream, but after he wakes up.

At the end of this opening scene, Emily hands him a straight razor, and encourages him to slit his wrist with it. But he’s interrupted by the copy of Dolores who is living in the Charlotte Hale (Tessa Thompson) body. This is an important moment for this theory, because the show very conspicuously does not show, after Charlotte shows up, whether he actually was holding that blade.

The language of filmed entertainment dictates that if Emily were a hallucination, we’d get a shot of William looking down at his empty hand there. But we didn’t, and that means that, at the very least, Jonathan Nolan and Lisa Joy want us to wonder about this.

Charlotte’s timing in this scene and later in the episode is very interesting as well. Specifically at the end of the episode where she tells William that she knows about the whole Emily thing. William assumes it just means that she was monitoring him by some means, and she rolls with it.

But it’s very interesting that Charlotte would time her visits so perfectly, and then use all that Emily stuff as an excuse to have him committed to a psychiatric facility. It’s almost as though she was setting him up the whole time!

Now, if Emily actually is a host and not a hallucination, then it seems likely that she is the fourth and final copy of Dolores. Which would, in turn, mean that just about everybody is in play now. Which is good — we’ve only got four more episodes to go in “Westworld” season 3, and I’m excited to see things really start to ramp up.

On the other hand, there’s also the possibility that this is a host copy of the real Emily. We still have one giant mystery leftover from season 2 which hasn’t really been touched upon this year. That being the identity of the real human that Ford (Anthony Hopkins) had Bernard (Jeffrey Wright) make a pearl out of. If Ford was making a game for William during the uprising, then this could easily be a continuation of that.

But that’s just a stab in the dark, because there haven’t been any clues about that red pearl, really since that scene when it was introduced. “Westworld” just put that out there midway through season 2 and hasn’t brought it up since. So any guess is a good guess. I’m really only bringing it up now to remind you that’s a thing that hopefully will be dealt with soon.