More than 100,000 people were wrongly told they were ‘extremely vulnerable’ to the deadly coronavirus and needed to self-isolate until the end of June

More than 100,000 people were wrongly told that they were ‘extremely vulnerable’ to coronavirus and needed to self-isolate until 30 June, it has been revealed.

The NHS and GPs were told by the Government in March to quickly highlight those deemed most at risk of becoming seriously ill from COVID-19.

Letters were sent to 2.16million people advising them to ‘shield’ themselves by not leaving their homes and minimising all face-to-face contact – even more stringently than the measures applied to everyone else.

But it has since emerged that around five per cent of the recipients were incorrectly included.

Officials have not clarified if the 100,000 patients all had a specific condition, or who was to blame for the error.

But it is thought to be down to GPs being asked to validate their lists because guidance had changed over the weeks based on new evidence.

The NHS had already noted some conditions had been classified as being a risk factor when they should not have, including peripheral vascular disease (PVD), a blood circulation disorder.

It follows the revelation that 10,000 letters had been sent to the homes of people who had died, causing distress to families.

Doctors trade union the British Medical Association said validating lists of vulnerable patients had been fraught with difficulties as a result of constantly changing advice from the Government. 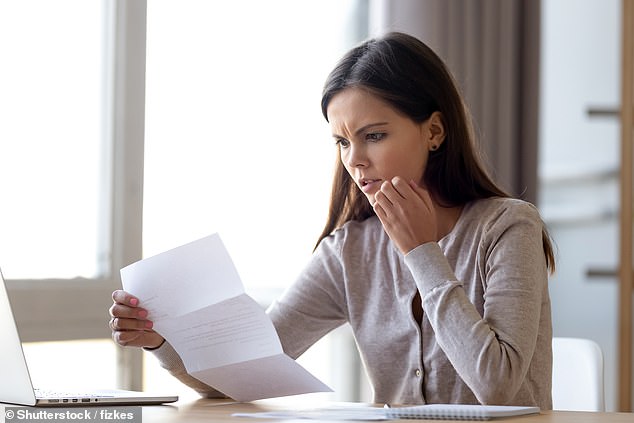 More than 100,000 people have been wrongly told that they were ‘extremely vulnerable’ to coronavirus and needed to self-isolate until 30 June (stock)

The list shielded patients list (SPL) initially totalled around 900,000, after being compiled by NHS Digital using hospital data and a set of clinical conditions.

These included people who had specific cancers, severe asthma, or were an organ transplant recipient.

This is because their immune systems are either compromised, and therefore will find it difficult to fight the virus, or because their condition has been identified as a risk factor.

England’s chief medical officer Professor Chris Whitty said the first wave of letters were sent out in the first week of April.

Some 2.16 million people have been identified as being clinically extremely vulnerable in total, after GPs were told to help flag any further patients using their own clinical judgement and medical records.

Letters included information and advice, including how those who have no-one else to support them can get medication and other essential items like food.

WHO IS AT HIGH RISK OF COVID-19 AND NEEDS TO ‘SHIELD’?

Some groups of people are considered to be at extremely high risk of severe illness with coronavirus and should strictly follow shielding measures.

According to NHS Inform, this includes people who:

The initial list of qualifying patients was put together in haste in mid-March, around the same time Prime Minister Boris Johnson began addressing the nation about the impending crisis.

But the speed and complexity of the process meant errors were included, the Health Service Journal reports.

After GPs were asked to validate the initial shielded patient list, around 107,000 patients were removed, the Department of Health and Social Care said.

GPs have now been told to send more letters to those who were falsely contacted in the first place.

The DHSC said this was based on ‘the latest available clinical evidence’ and did not reveal the conditions of the people who had received a letter in error.

NHS England had previously noted some issues with their algorithms, meaning conditions that were not high risk had been picked up, such as peripheral vascular disease (PVD), a blood circulation disorder.

People with stable HIV but no health concerns have been flagged because at some point in their past, they had been noted as have a suppressed immune system.

But it stated ‘our priority was to ensure that we got vital information to patients as quickly as possible… with the risk that we would also include a small number of individuals who do not need to use social shielding’.

According to the BMA, various changes in advice from the Government and the NHS, together with the very short timescale for practices to validate the list, ’caused a number of problems’.

GPs were given several tight deadlines including over the Easter weekend for fact checking and amending lists, which left room for errors.

The association, which represents doctors, also said there may still be some people who have not yet been identified and notified that they should be taking steps to shield.

NHS England’s director of primary care, Dr Nikita Kanani, admitted the process has been ‘really frustrating’ for GPs and said she was ‘very happy to apologise’.

She apologised to GPs for the organisation’s handling of the issue of patients on GP lists on April 17, Pulse Magazine reported.

NHS Digital has already apologised after sending letters to more than 10,000 dead Brits, warning them they were at extra risk of COVID-19.

The letters were mistakenly issued to 10,924 people who were given radiotherapy for lung cancer but died between 2006 and 2017.

It has been feared those in the most vulnerable groups will need to shield for more than 12 weeks – potentially until a vaccine is found.

But today Health Secretary Matt Hancock said that some of the restrictions could be lifted, even without a protective jab.

He told Sky News: ‘We may well be able to release some of those measures before a vaccine is available if we can get the number of new cases right down.

‘If we succeed in doing that we will be able to take clinical advice on whether it is safe for those who are shielded to, for instance, to hug their grandchildren. That is right at the front of my mind.’

A Department of Health and Social Care spokesperson said: ‘People are added and removed from the shielding list regularly based on their GPs clinical judgement, with 2.16million patients identified as being clinically extremely vulnerable so far.

‘GPs are be best placed to advise on the needs of their individual patients during this time and if anybody is concerned they should be included on the list, they should discuss with their GP.’