A real toy story: Father who started photographing toys as a hobby now makes a full-time living with industry giants Disney and Hasbro

A creative dad has managed to make a full-time career out of playing with toys – as he photographs amazing scenes using just toy figures as his subjects.

Mitchel Wu, 57, tells amazing stories in just single photographs, with the help of a whole host of familiar toys – from popular Disney and Lord of the Rings characters, to Hasbro’s Power Rangers.

His action-filled still images show Woody from Toy Story sliding down a bannister, with Buzz Lightyear ‘hovering’ beside him; and a group of Star Wars Stormtroopers enjoying a beer and a barbeque, for National Beer Day on April 7. 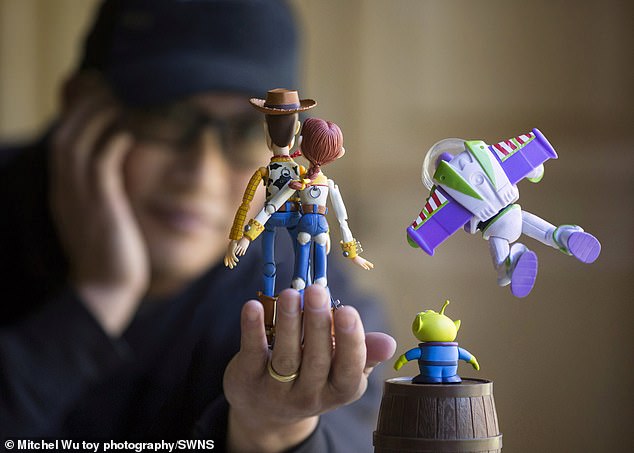 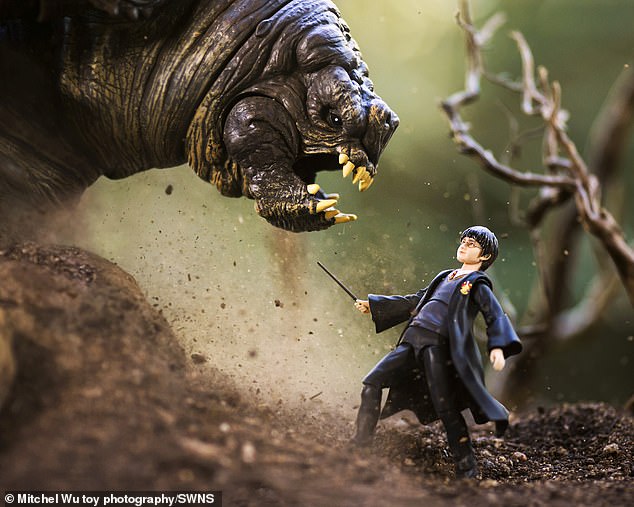 Flipendo?: Wu created this unique photograph of a Harry Potter toy facing off against a gargantuan, snarling beast 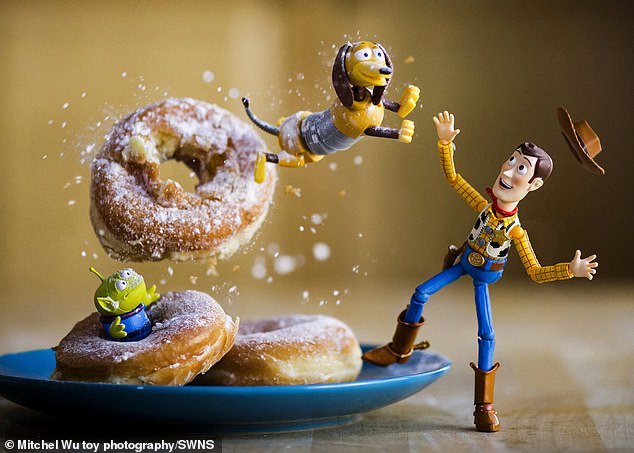 Dognuts: Woody stands ready to catch slinky dog as he jumps out of a ringed doughnut 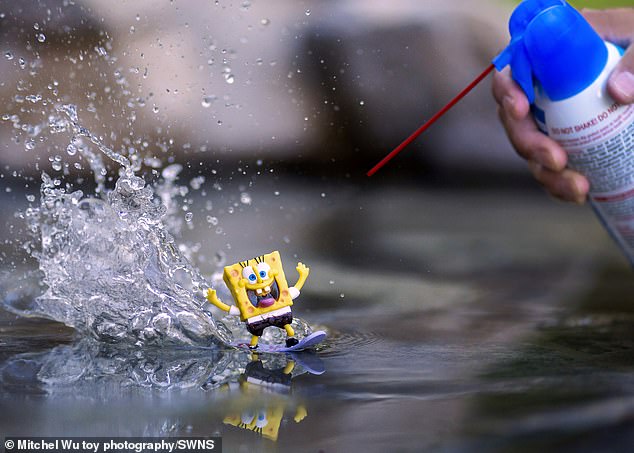 Do the Spongebob slide: 57-year-old Wu manages to support his family with his action-packed photographs

Another of Mitchel’s photos shows Harry Potter cowering away from the Rancor beast from Star Wars.

And in one ‘heartwarming’ image, Mitchel has photographed a mother and baby xenomorph, from Ridley Scott’s 1979 blockbuster, ‘Alien’, simply sitting side by side on a rock.

Mitchel, from Los Angeles in Calfornia, USA, said: ‘When I posted that image people had such a strong loving, emotional response to it.

‘I guarantee it was the first time anyone ever had warm feelings towards xenomorphs!’ 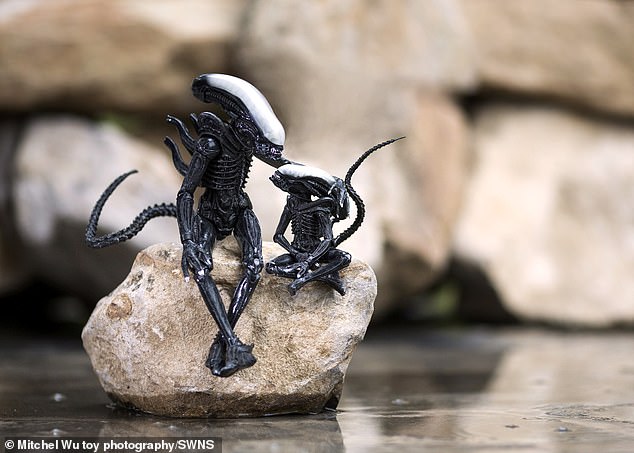 And in one ‘heartwarming’ image, Mitchel has photographed a mother and baby xenomorph, from Ridley Scott’s 1979 blockbuster, ‘Alien’, simply sitting side by side on a rock 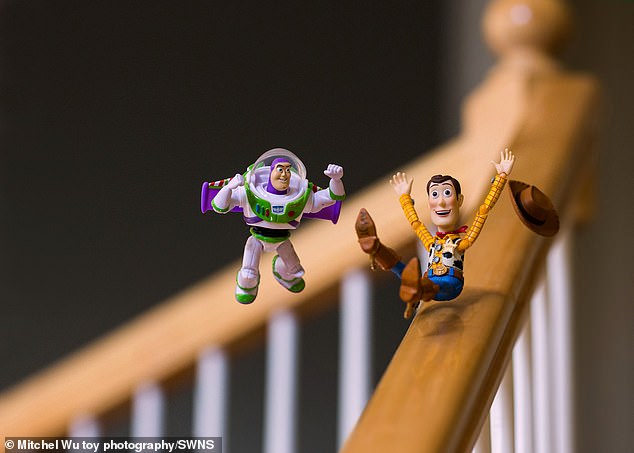 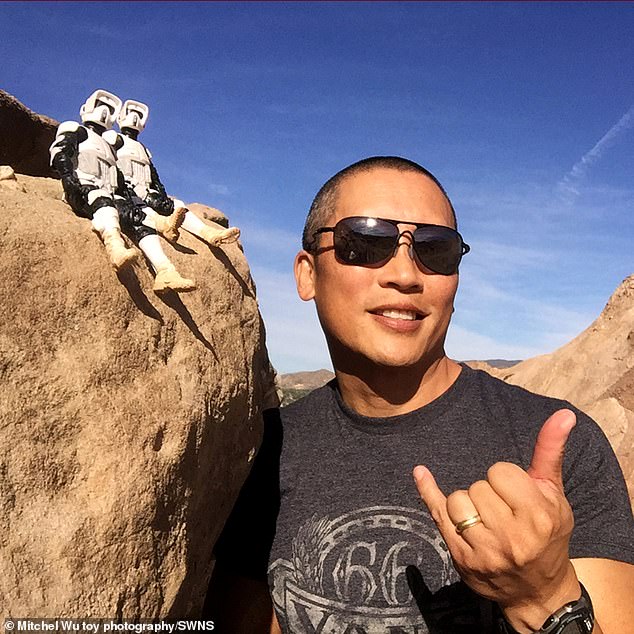 Wu is pictured here next to two stormtroopers. His subjects ranger from popular Disney and Lord of the Rings characters to Hasbro’s Power Rangers 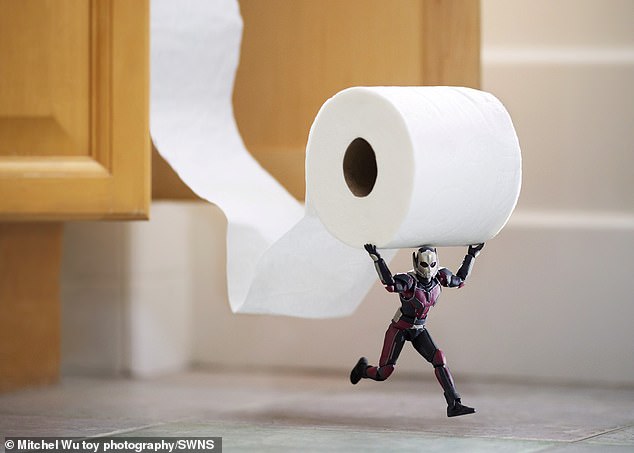 Antman is pictured stealing a roll of toilet paper. It’s not known whether this image was shot during the current coronavirus pandemic

Mitchel’s photos can take anywhere from a couple of hours, to most of a day, to set up, shoot and edit.

But, as a dad who spent years watching classic Disney and Studio Ghibli films with his now 19-year-old daughter, he said that the nostalgia that his job creates ‘makes me feel warm inside’.

Mitchel joked: ‘Toy photography is the best way to ‘play’ with toys as an adult, in public, without someone calling the police on you. 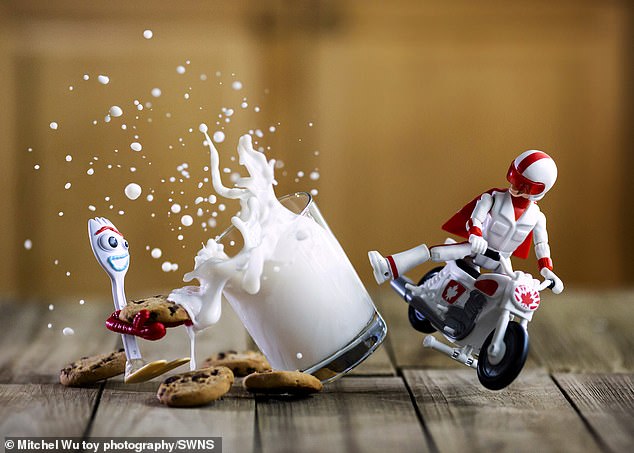 Forky smiles as Duke Caboom pours a glass of milk on to his cookies, from the movie Toy Story 4 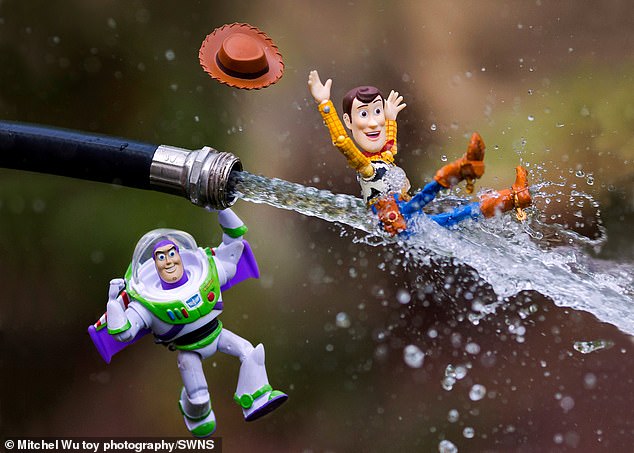 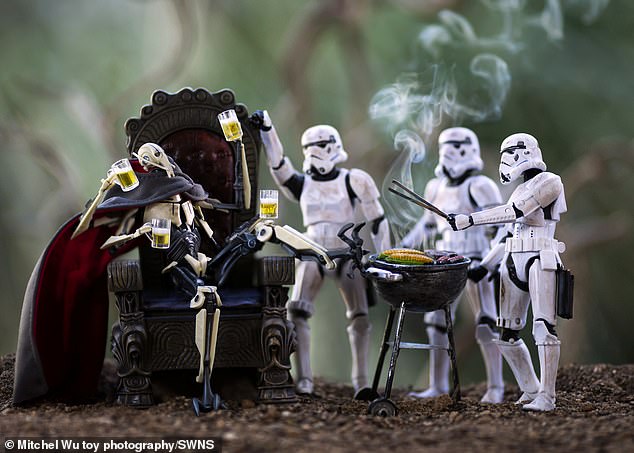 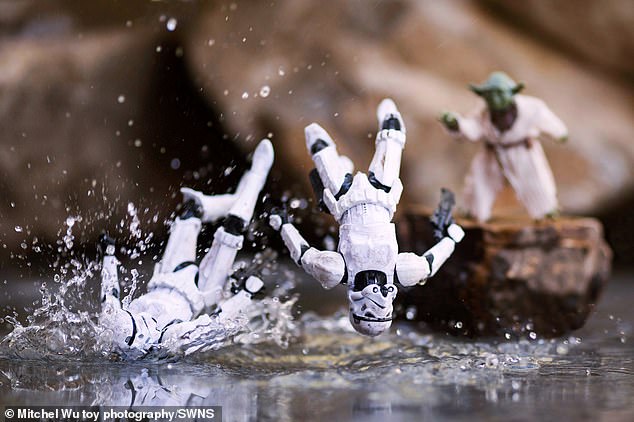 Jedi Master Yoda from Star Wars uses the force against stormtroopers, plunging them into the water

‘I love seeing it through my daughter’s eyes.

‘Most people still have that young, 10-year-old kid within them, but as you get older it gets really hard to access that part of yourself.

‘But it’s hard to make the images that I do without going back to that time and that world where you played make believe.’

He added: ‘For me, it’s always been about telling stories, and letting that drive the image. 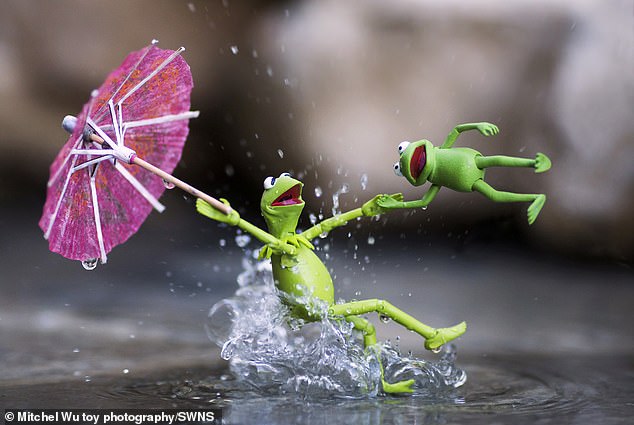 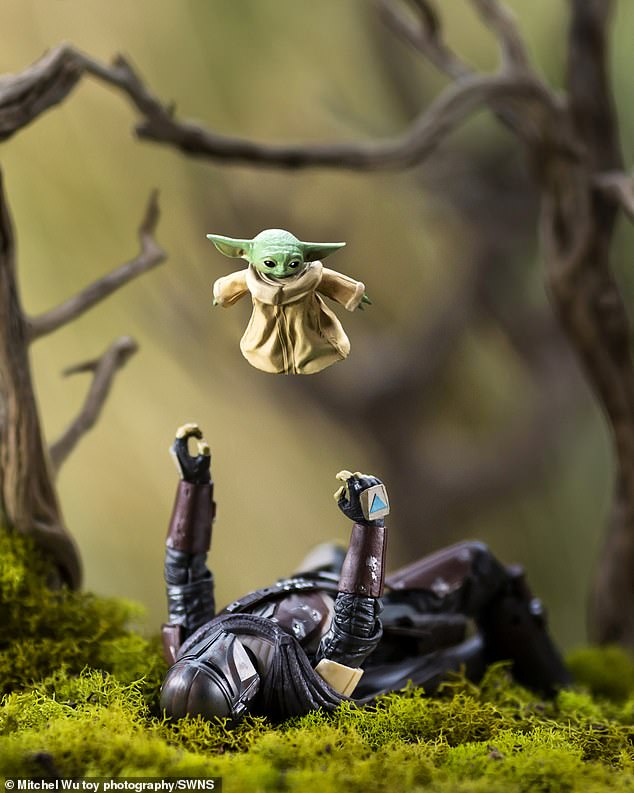 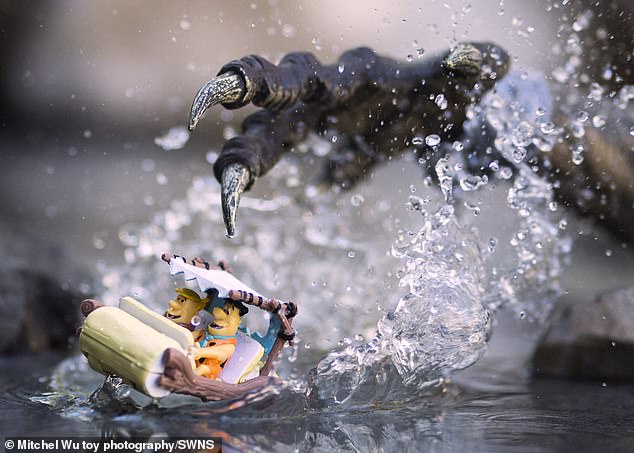 ‘One of the most challenging things about toy photography is how to tell a story in just one frame.

‘But I love that challenge, of trying to get motion and emotion in an image where there isn’t any.’

When he started out in late 2015, Mitchel did not own any toys – but has gradually purchased them over the past few years, to support the stories he wants to tell. 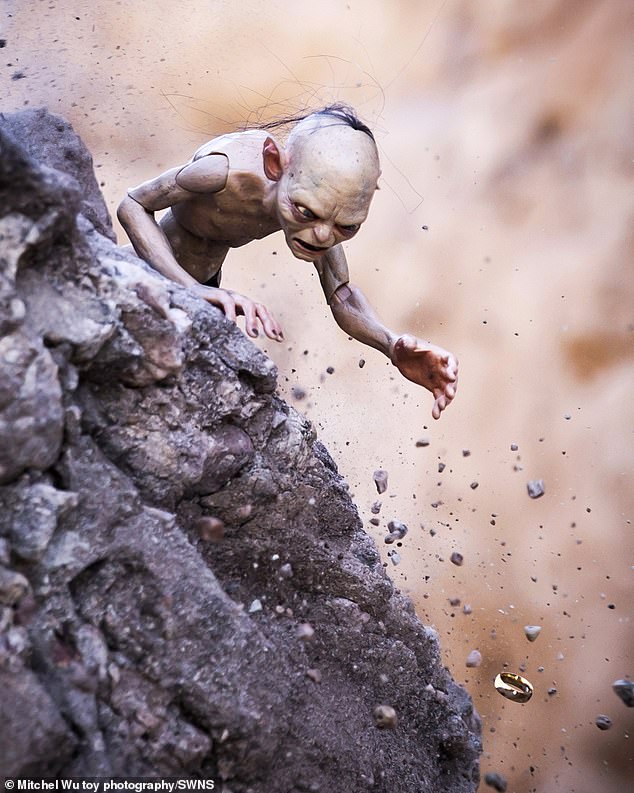 When he started out in late 2015, Mitchel did not own any toys – but has gradually purchased them over the past few years, to support the stories he wants to tell. Pictured: Gollum drops the ring in this recreation of The Lord Of The Rings. 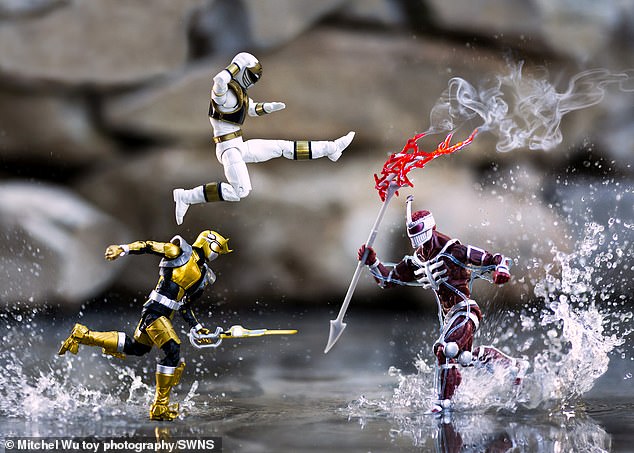 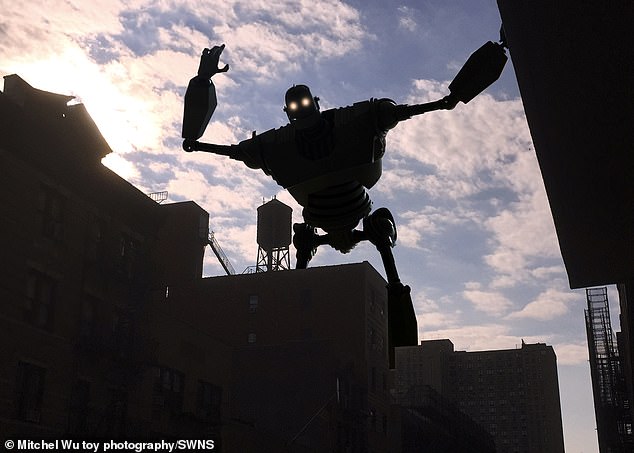 The Iron Giant, from the 1999 smash fantasy movie, can be seen towering over New York City

He said: ‘Most people who photograph toys as a hobby will usually specialise in a certain type of toy, for example Star Wars toys, Marvel toys, maybe even Hot Wheels or Barbie.

‘But for my personal work, I really want to let the stories drive what toys I use, not the other way around. Telling stories is the most important aspect for me.’

Since starting toy photography in late 2015, Mitchel has had contracts to create images for big-name brands including Disney, Hasbro, Warner Bros, Kinder Surprise, and Mattel, among others.

Before photographing toys, he was a lifestyle photographer, mainly shooting weddings – but he said he found it was taking up too much of his free time and weekends. 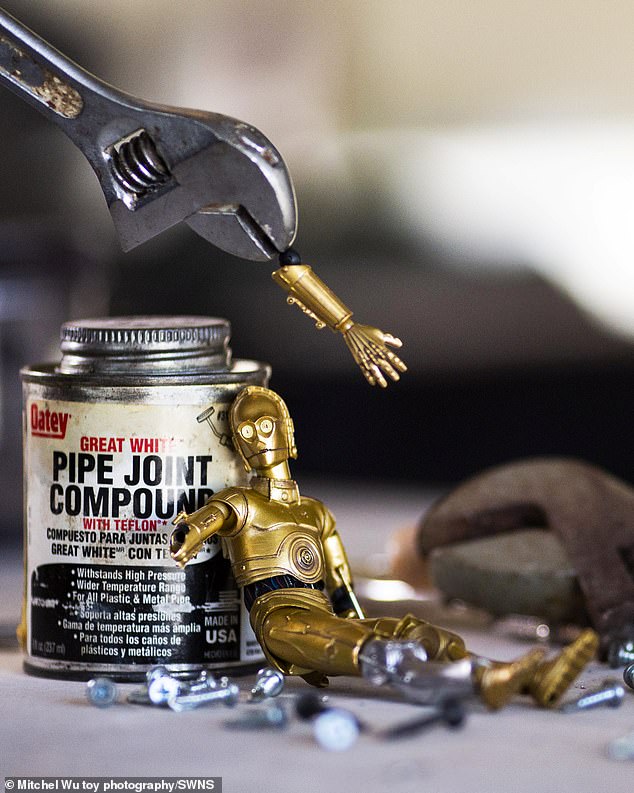 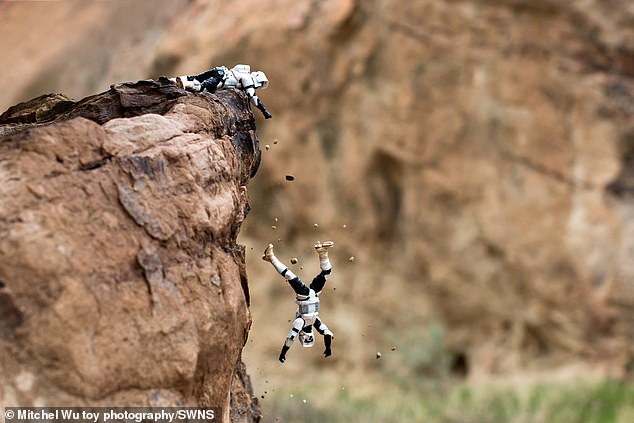 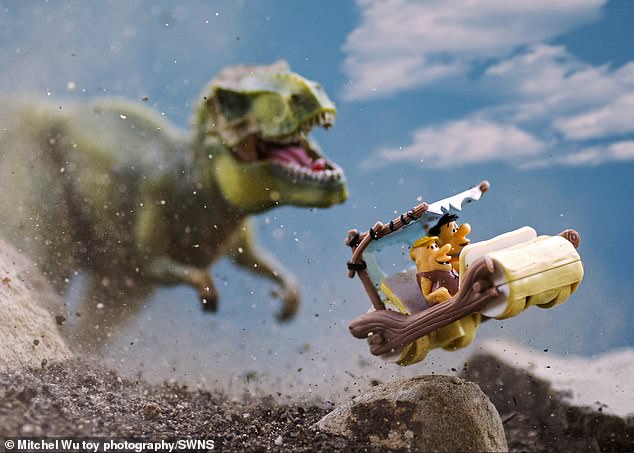 Mitchel said: ‘I was starting to miss a lot of school competitions and activites that my daughter was involved with.

‘When she started high school, I knew a change was in order.

‘I had no idea what I wanted to do – but then, in summer 2015, I went up to visit my nephew in San Francisco, and he had just started shooting toys.

‘He took me to the park one afternoon to do a shoot with him – and from the moment I started, I saw the potential to create incredible stories using toys.

‘I saw it as a new photography art form – and immediately saw the potential to make a career out of it.’

Mitchel, who went to art school and has a degree in illustration, added that toy photography as a career is still ‘extremely niche’.

He said: ‘I know many people for whom it is a dream job, who would love to make a career out of it.

‘But I don’t know of anybody who has been able to take it much further than a hobby. It takes more than just photography skills.’

He added that one of his goals with his images is to ‘get people to see characters in unexpected ways’.

Mitchel said: ‘We are all force fed, by writers and creators, how to feel about most characters, so we all have strong preconceptions about them. 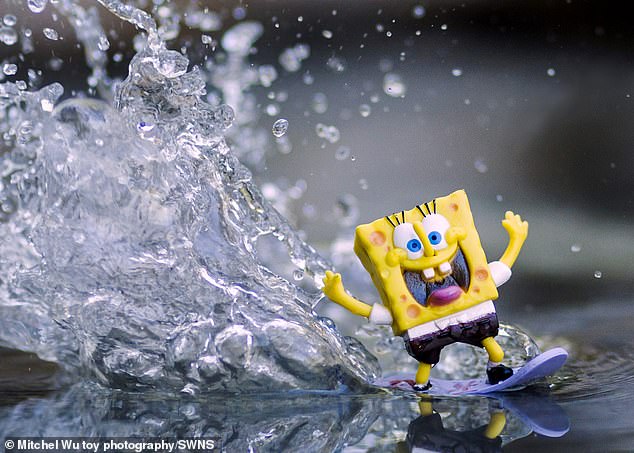 Spongebob goes surfing, and he looks pretty pleased with his technique in this photograph constructed by Wu

‘Darth Vader is a good example. Everyone knows he’s an evil villain.

‘But my thought process has me wondering if he’s really that evil 24/7, or does he let his hair down (symbolically) and relax when he’s not being evil?

‘That was the genesis for the idea behind the image where I have Vader pushing a stormtrooper on a swing.

‘The same can be said for the heartwarming image I created of a Mother alien xenomorph sharing a tender moment with its child.’

In June last year, Mitchel landed his dream photography commission with Disney – for whom he had previously worked as a product designer from 1995 to 2001 – to create six images of Woody and the gang, to mark the release of Toy Story 4.

He was also given a large, 70-image exhibit at the massive annual event Toy Fair, in New York, in February, where he also cut the opening ribbon with former basketball player Shaquille O’Neal.

But Mitchel said that, for him, it is not all about his clients or exhibit appearances.

He said: ‘Almost all of my images are personal.

‘I’m constantly creating new images for me, so that I can experiment with new techniques for when clients do get in touch.’