Out of sight, out of mind. It’s easy to shirk responsibilities when that thing needing attention is thousands of miles away. Especially when there are issues here at home to tend to.

I can easily distract myself with Australia’s current events, or our local concerns in Collingwood, or the laundry piling up in my closet. And if I really want to worry myself sick, I’ll focus on the coronavirus and my eight-year-old daughter, and that petri dish of a school she goes to. 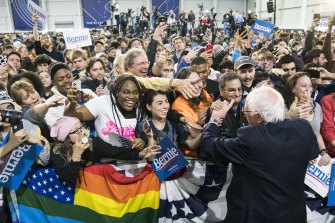 A vote for Bernie is a vote for a different kind of cult.Credit:Bloomberg

But I can’t let life here be an excuse to ignore a responsibility elsewhere. Voting is mandatory in Australia, not so in the US. As easy as it would be to turn a blind eye to the American election altogether and just not vote, it’s a right and responsibility I respect. I’m also concerned for my homeland and what a potential four more years of Trump will do to the soul of the country – how irreversible the damage to our national character will be.

Still, I’ve taken a while to choose my nominee. I faxed my ballot back to the US just before the deadline. The problem is no candidate ticked all my boxes. I was looking for strong moral character and the ability to beat Trump. We’ll deal with the rest later.

In 2016 I chose Bernie Sanders over Hillary Clinton, but four years of Trump has made me less interested in idealistic policy change and more interested in changing the administration. I know Bernie means well, but his ideas are too extreme for mainstream Americans with his sales pitch for free university and the forgiveness of all student debt, and a universal healthcare system that completely wipes out private insurance. While I agree there should be a total restructuring of the shameful US healthcare system, Bernie’s plans are too far a leap and his funding proposals fall short. 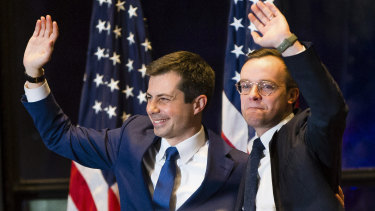 “By every conventional wisdom, but every historical measure, we were never supposed to get anywhere at all,” said Pete Buttigieg, pictured with his husband Chasten, now bowed out of the race.Credit:South Bend Tribune/AP

Then there’s the whole “socialism” thing. Bernie self-identifies as a Democratic Socialist. Not a good look. Americans are terrified of the word "socialism" or any rendition of it. It contradicts the fundamental foundation of The American Dream: life, liberty, the pursuit of happiness and having more stuff, a bigger house and a nicer car than your neighbour.

I don’t want to trade one angry cult in the White House for another.

Trump will paint Bernie as a bleeding heart liberal who wants to take hardworking Americans’ money away and give it to a bunch of moochers who are too lazy to earn it for themselves or pay their own way. Added to this, I don’t like Sanders’ campaign energy this time around or the character of his supporters. I’m tired of anger and divisiveness, and I don’t want to trade one angry cult in the White House for another.

So, I decided to use my vote not as a calculated, political strategy, but as a gesture of hope. I didn’t vote for the candidate I thought had the best chance of winning the party nomination. Some people think that’s a wasted vote but I disagree. I voted for the candidate who represents the national character and personal integrity I endeavour to find within myself and hope to find in my fellow Americans.

I voted for the candidate who gave me hope that there are still good people in the world governed by their conscience and their heart, who want to good, not for self-advantage or personal glory, but for love of country, a sense of duty, and compassion for their fellow-man. I voted for Pete Buttigieg.

In fact, I was so inspired by him that I made a financial contribution to his campaign, something I’ve never done in any other election. And then a few days later, he dropped out of the race, earlier than expected, though expected nonetheless.

Now it looks like Joe Biden is pulling ahead as the likely nominee after Super Tuesday. He’s not as inspiring as Buttigieg, he’s got his shortcomings, but he’s also not as polarising as Bernie. He won’t scare people away like Bernie’s socialist-leaning ambitions do.

I’m not confident Biden will win the election in November, but I think he’s our best shot at beating Trump. Regardless, whomever the nominee is after this all shakes out, that’s my guy.

Come November, whether it’s Bernie on the ticket or Biden, as long as Trump is the alternative, no hesitation necessary.

My overseas ballot will be faxed back in a hot minute.

Aubrey Perry is a regular columnist.