Who’s a greedy cat? Adorable moment kitty sticks its head down a cardboard tube as it sniffs out a piece of chicken

A kitten’s greedy expression as it sticks its head down a tube to lick a piece of chicken has been caught on film.

Footage shows one-year-old cat Simon forcing his head down the cardboard tube and wiggling his nose as he tries to reach the snack.

It was filmed by owner Anastasia Sviridova, who set the camera trap at their home in Kansk, Russia, almost 3,000 miles east of Moscow. 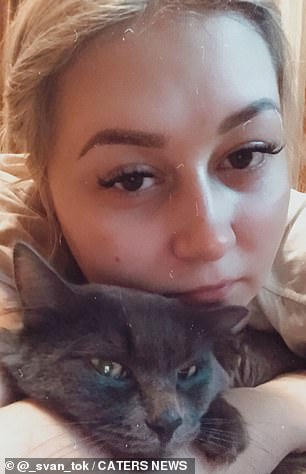 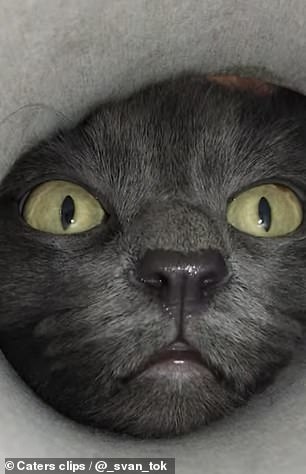 The video of one-year-old cat Simon reaching for the snack was filmed by Anastasia Sviridova at their home in Kansk, Russia, almost 3,000 miles east of Moscow

The clip begins with the green-eyed cat sniffing and breathing heavily as it sticks its head into the tube after smelling the poultry.

It then forces its head down the tube before panting and licking the chicken and the camera lens.

Suddenly, the cat pulls away, possible after the owner called him off.

‘I was just playing with him!’, said Ms Sviridova. ‘Simon was trying to get a small piece of tasty chicken.’

‘Our subscribers also liked it and now this video has millions of views!’ 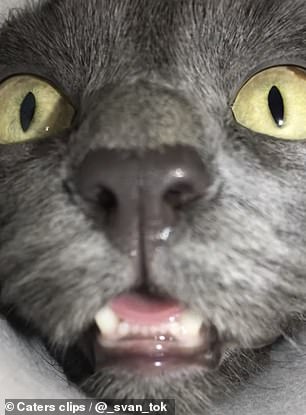 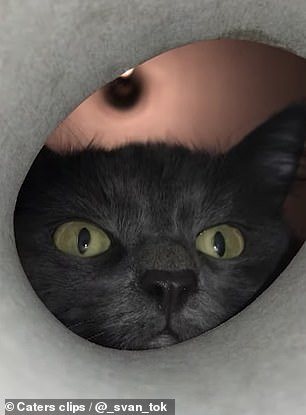 Ms Sviridova’s footage has gone viral since it was uploaded to social media, and has received more than six million views.

She has also posted a picture of herself and her beloved cat together.

The video was filmed on February 9.