Almost a QUARTER of all pregnancies in England and Wales resulted in an abortion in 2018, the highest since records began – as the conception rate tumbled to its lowest rate in 16 years

Women are having a record number of abortions, with almost a quarter of pregnancies resulting in a termination, new figures revealed today.

Some 24 per cent of expectant mothers had termination in England and Wales in 2018, according to the Office for National Statistics (ONS).

At the same time, the conception rate tumbled to its lowest level since 2014 – with the only increase among women aged 40 and above.

And the number of ‘gymslip mums’ also fell to a record low, with the number of women aged under 18 becoming pregnant falling by more than 60 per cent in the past two decades.

The figures come as a record number of women are working full time, with more than 150,000 joining the workforce in the last quarter of 2019. 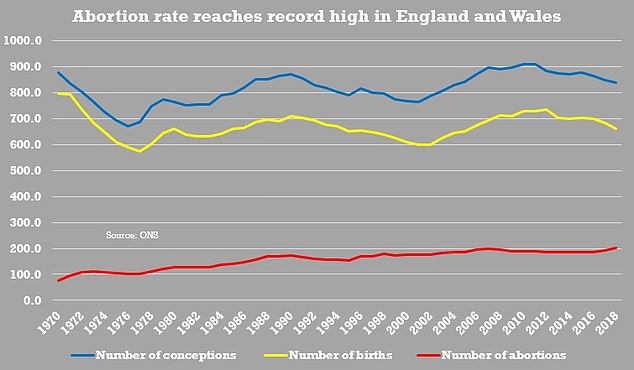 But today’s figures for 2018 show a wide socio-economic divide.

One in three women believes their employer would not be sympathetic to flexible working, a study suggests.

Two out of five of 2,000 working women surveyed by hotel giant Hilton said they would not feel confident asking their employer about flexible working arrangements.

This is despite flexible working topping the most important things women look for in a potential employer, being valued above a high salary and holiday entitlement, said the report, published ahead of International Women’s Day on March 8.

More than half of those polled said senior business leaders should champion flexible working to encourage women to progress in their careers.

A better work-life balance, more time to spend with family and benefits to mental health were cited as the biggest positives that come with working flexibly.

Almost a third of women questioned believed their employer would not be understanding if they opted for a flexible working pattern, and almost two-fifths thought their salary would be impacted.

ONS statistician David Corps said: ‘In 2018, the conception rate in England and Wales fell to its lowest level since 2004, while the proportion that led to a legal abortion increased to its highest point since records began in 1990.

‘Although conception rates for women under 18 years have more than halved in the last decade, they remain twice as high in more deprived areas of England than less deprived areas.

‘However, analysis shows that a smaller proportion of these conceptions lead to abortions for under 18s living in more deprived areas.’

The percentage of conceptions leading to a legal abortion among all women resident in England and Wales increased from 22.7 per cent in 2017 to 24.0 per cent in 2018.

For the third year in a row the only the group to see an increase in conceptions was women aged 40 and over, as prospective mothers delay childbearing.

There is an opposing fall in pregnancies among young women, the ONS found, noting: ‘Since our records began in 1969, there has not been such a prolonged decrease in conception rates for women aged under 18 years.