Arsonists have targeted a Russian TV host’s Lake Como villa, while suspected activists scrawled ‘killer’ onto another of his seized Italian properties and poured red paint into its swimming pool, according to local reports.

Italian firefighters were called to put out a fire at the villa Wednesday morning – reportedly owned by the pro-Putin personality Vladimir Soloyvev, who has been hit with European Union sanctions prompted by Russia’s invasion of Ukraine.

An official at the Como fire station confirmed firefighters extinguished the early morning blaze at the villa in Menaggio, one of the picturesque towns that dot the lake in northern Italy.

He said police were investigating the fire as a suspected act of protest. The villa was under renovation and the blaze involved tires at the site, said the official who declined to be identified by name, citing official policy.

Speaking days after Putin launched his invasion of Ukraine on February 24, Soloyvev bemoaned EU sanctions brought against him. He seemed particularly offended by the prospect of losing his Italian holiday destinations. 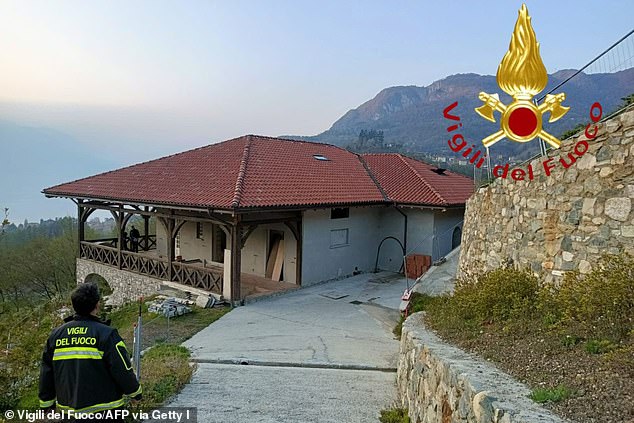 Pictured: Investigators arrive to an Italian villa said to belong to Russian TV host and pro-Putin personality Vladimir Soloyvev, located near Lake Como. Officials said they were called to reports of a fire at the property on Wednesday morning, caused by suspected arsonists 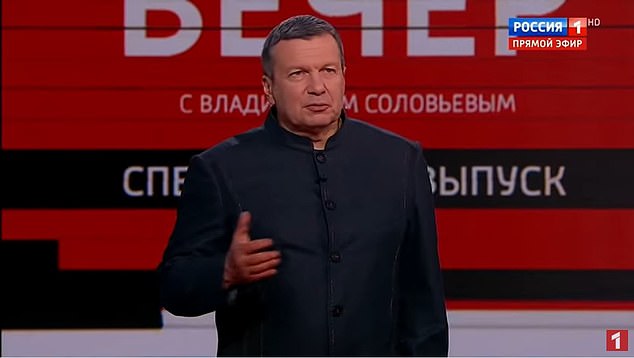 Vladimir Soloyvev (pictured) has been hit with European Union sanctions prompted by the Russian president’s invasion of Ukraine. According to the EU sanctions, Solovyev is ‘known for his extremely hostile attitude towards Ukraine and praise of the Russian government’

Solovyev owns two houses on Lake Como that are worth a combined eight million euros, according to the Italian government that announced the property seizures last month.

‘Just one team of firemen put out the fire within a very short time,’ Como fire chief, Gennaro di Maio, told AFP. ‘There is hardly any damage, it was burnt tyres that gave off visible black smoke,’ he said.

Menaggio’s mayor, Michele Spaggiari, told Italy’s AGI news agency that the fire appeared to be ‘a demonstrative act’ causing little or no damage.

Spaggiari said Solovyev bought the property about five years ago.

Firefighters said they were called out at 6 a.m. to the scene, and completed the ‘operation’ to put out the fire by 8 a.m., adding that as it was under renovation, it was uninhabited at the time. 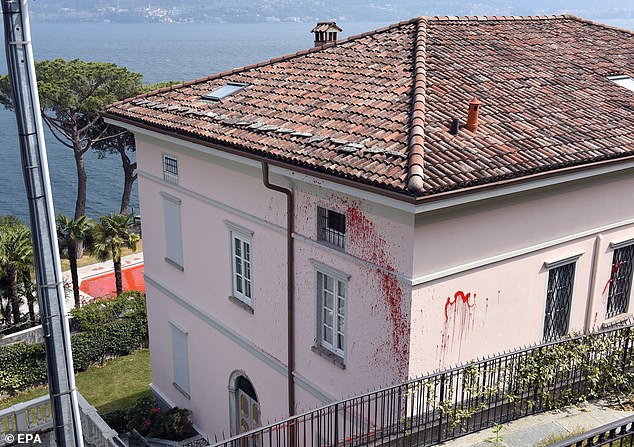 The vandalized facade of one of the two villas belonging to Russian state TV host Vladimir Soloviev on the shores of Lake Como, Italy, seen on April 6, 2022 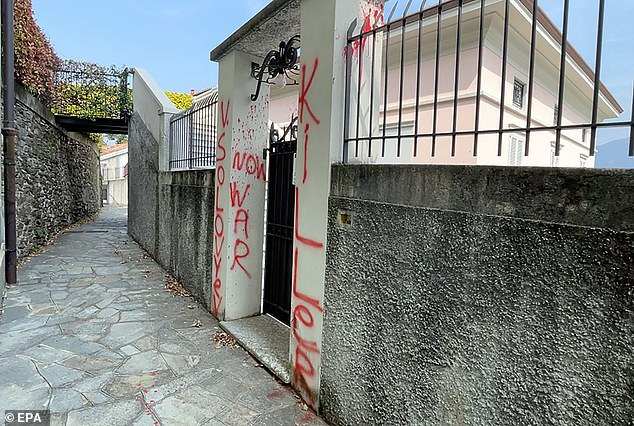 Pictured: The entrance to Soloviev’s villa, with red graffiti sprayed by suspected activists. the word ‘killer’ can be seen sprayed down one column

At another of his properties – a large salmon-pink villa also on Lake Como, pictures showed the words ‘killer’ and ‘no war’ pained in red on the building’s facade and entrance way. According to la Repubblica, red paint was poured into the pool

According to the EU list of sanctions, Solovyev is ‘known for his extremely hostile attitude towards Ukraine and praise of the Russian government.’

The EU says he was targeted because of his support for ‘actions or policies which undermine the territorial integrity, sovereignty and independence of Ukraine.’

Days after Vladimir Putin’s invasion of Ukraine on February 24, Soloviev publicly lamented losing access to his multimillion-dollar vacation homes due to Italian-imposed sanctions spurred by Russia’s unprovoked invasion of Ukraine.

‘Is this the Iron Curtain?’ Soloviev opined on the set of his late-night program. ‘I was told that Europe is a citadel of rights, that everything is permitted, that’s what they said.’ 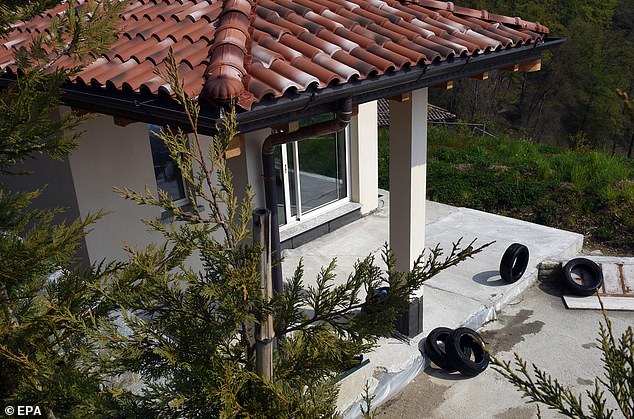 Pictured: Tyres are seen outside the villa which firefighters were called to on Wednesday morning. They said tyres were involved in the small fire 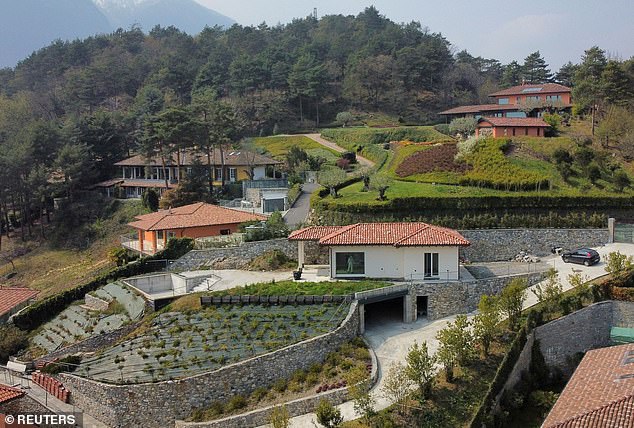 A general view of the villa owned by Russian TV presenter Vladimir Soloviev, after unidentified people attempted to set fire to it, in Menaggio, on Lake Como, Italy, April 6, 2022

Despite early images from Ukraine showing Russia’s brutal invasion was already creating a mounting death toll, forcing people from their homes and causing wide-spread destruction, Soloviev seemed most concerned about how the ensuing sanctions will affect his ability to vacation at his sprawling Italian villas.

‘I know from personal experience about the so-called “sacred property rights,”‘ Soloviev, 58, told the show’s panel.  ‘With every transaction, I was bringing paperwork demonstrating my official salary, income, I did it all. 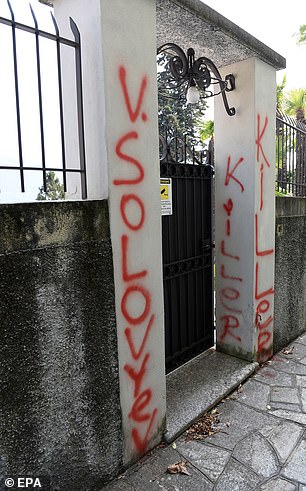 ‘I bought it, paid crazy amount of taxes, I did everything,’ he griped. ‘And suddenly someone makes a decision that this journalist is now on the list of sanctions. And right away it affects your real estate. Wait a minute. But you told us that Europe has sacred property rights!’

Taken aback by the restrictions, which officials said may evolve into the journalist losing the properties altogether if the conflict worsens, Soloviev fumed: ‘All of a sudden, now they say: “Are you Russian? Then we will close your bank account, if it’s in Europe.”‘

He went on: ‘And if it’s in England, you’re allowed to keep no more than a certain amount there. Why? Because you’re Russian,’

Renowned Russian economist Mikhail Khazin, 59, interjected: ‘And that’s if you have an old account. They won’t open a new one.’

Soloviev then offered the panel the dramatic comparison between the consequences leveled against Kremlin propogandists by countries against Russia’s occupation of the Ukraine, and the Cold War.

‘Is this the Iron Curtain?’ the host, who appeared visibly emotional during the strange appeal, asked. 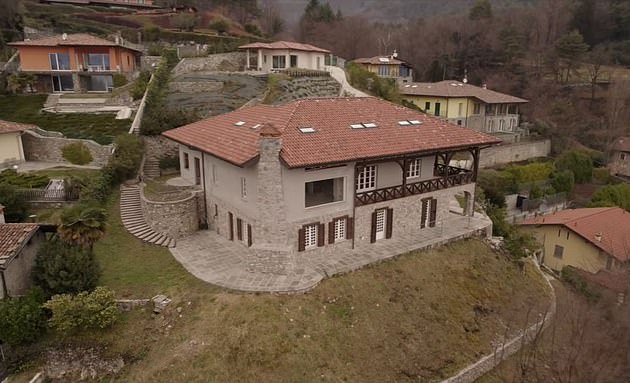 Pictured: The villa belonging to Soloviev that was set on fire. It is likely valued in the tens of millions. The estate boasts 14 rooms, five bedrooms, five bathrooms, a living room, a kitchen, an entrance hall, a boiler room and a pantry, as well as a 90-sq-m guest house with three guest rooms, two bathrooms, a cellar and a private, gated porch 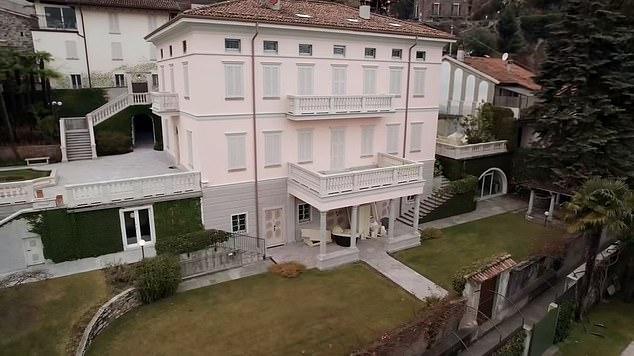 Pictured here is the second of Soloviev’s multimillion-dollar Italian estates, also in Lake Como, that was vandalised with paint on Wednesday

‘The Iron Curtain in its worst manifestation,’ the commentator said. ‘Painted in LGBT colours.’

Soloviev and the other panellists proceeded to nod in agreement, without mention of the effects the ongoing military occupation has had on Ukrainian citizens.

In 2019, Soloviev and other Kremlin propagandists came under scrutiny after a report by famed Putin rival and Russian anti-corruption activist Alexei Navalny revealed the long-time NTV host had not one, but two multimillion-dollar properties just down the road from Clooney’s $100m estate on the historic Italian lake.

Following the revelation of the two sprawling properties’ existence – located within a few miles of each other – neighbors have clamored for Soloviev’s exile from the highly exclusive resort area, where properties such as Soloviev’s are commonly valued in the tens of million.

In 2019, residents launched a petition to get local authorities to ensure the TV talker did not obtain Italian citizenship through his residency.