Baggage handlers who were filmed manhandling luggage and slamming it into a moving conveyer belt in Melbourne have been stood down from their jobs pending an investigation.

Video emerged on Friday of Swissport baggage handlers carelessly throwing Qantas travellers’ bags onto the moving surface, which repeatedly fall off the baggage carousel due to the force.

One man is seen holding a bag over his head before slamming it down onto the conveyor belt.

A spokesman for Swissport – which is a contractor for Qantas – confirmed an internal investigation had been launched into the behaviour of a number of its staff members.

The company confirmed the vision was taken in Melbourne and contains Swissport employees.

“Swissport trains and manages all staff to handle customer possessions with care and diligence,” the spokesman said.

“The actions of staff in the video appear to have contravened those service level standards. As a result, the staff in question have been stood down pending an urgent investigation.”

It is not yet clear who took the footage or when it took place. The Age and the Sydney Morning Herald has reached out to person who originally posted the video on social media.

In a letter to staff, Swissport CEO Brad Moore said that disrespectful behaviour to customer’s luggage “will not be tolerated” and would result in disciplinary action.

“The unacceptable behaviour of a few individuals will not go unchecked nor be allowed to tarnish the quality work of our whole team,” he said. 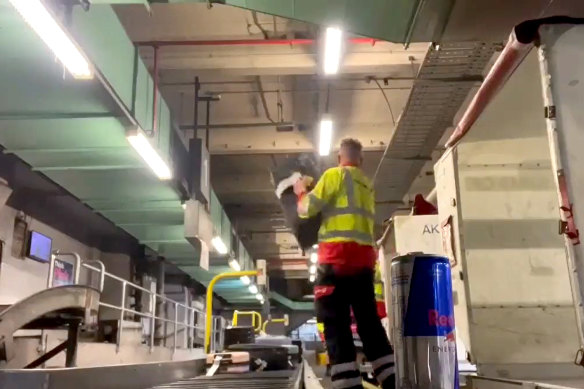 “The behaviours in the video let all of us down – most importantly our frontline staff who have worked so hard through post-COVID ramp up to assure quality standards in at times challenging circumstances.”

At Melbourne Airport, travellers expressed disbelief when asked about the video by Nine News.

“People aren’t really aware of what’s in those bags. People’s personal items can be really important to them, and you kind of expect them to get that, when you fly with Qantas.”

A spokeswoman for Qantas said on Saturday called the behaviour unacceptable.

“The behaviour in this video is clearly not acceptable, and our contracted ground handler is conducting an urgent investigation,” she said.

The vision emerged just a week after almost 100 per cent of Qantas’ 1200 domestic flight attendants voted in favour of protected strike action if the carrier does not offer a better pay deal.

On November 23, the airline announced on the ASX that it would post a $150 million upgrade to its profit forecast. This takes Qantas to between $1.35 billion and $1.45 billion in underlying profit before tax in the first half of its financial year.