Bambi and the blossom: Beautiful scenes as deer enjoy Japanese tourist spot which has fallen quiet while people stay away during pandemic

A herd of deer enjoyed a blissful rest under cherry blossom trees in Japan after the tourist spot was left empty by the coronavirus crisis.

The deer lay among the pink-blossomed trees in a beautiful scene at Nara Park near Osaka, which is home to more than 1,000 of the animals.

In normal times, visitors will flock to the park to mingle with the deer and feed them crackers while they enjoy the blossom and visit a series of temple buildings.

However, tourists have stayed away during the state of emergency which was imposed by prime minister Shinzo Abe in early April. 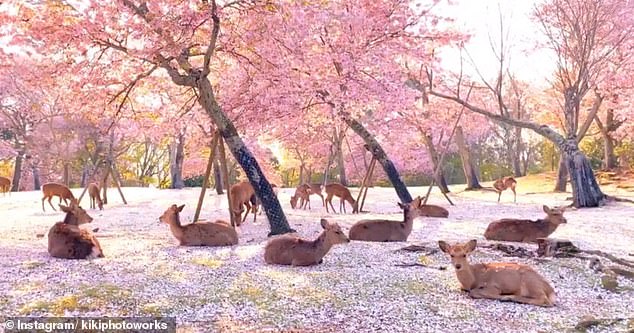 Blissful: A herd of deer rest among the pink-blossomed trees in Nara Park near Osaka, which has been left empty because of the coronavirus pandemic 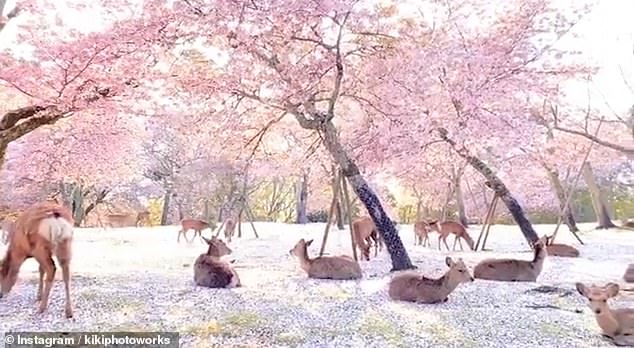 Peaceful: Some of the deer were lying among the trees while others roamed around the park, which is usually full of tourists

Japan’s tourist board says the wild-roaming deer in Nara Park are ‘very playful and friendly’.

‘It is possible to walk up to the deer and take a photograph with them or feed them with deer crackers on sale along the side of the road,’ guests are told.

More than two million people a year visit Nara Prefecture where the park is located, according to Japanese media.

Japan’s beautiful cherry blossoms were continuing to attract crowds until late March, possibly aiding the spread of the virus.

Warm weather meant that the cherry blossom season in Tokyo began on March 12, the earliest ever for the capital.

Abe suggested last month that the virus may have spread during the three-day Vernal Equinox weekend on March 20-22.

Reports in Japan said that parks and tourist attractions were busier than usual that weekend, and the break was followed by a spike in new cases. 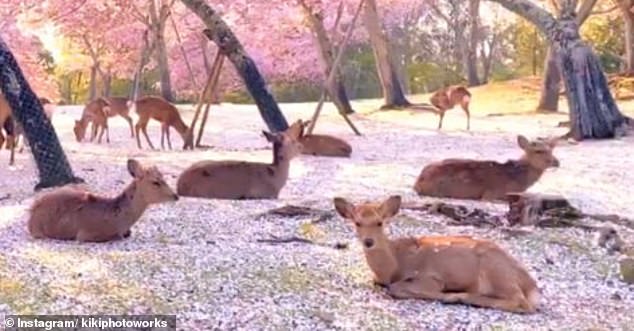 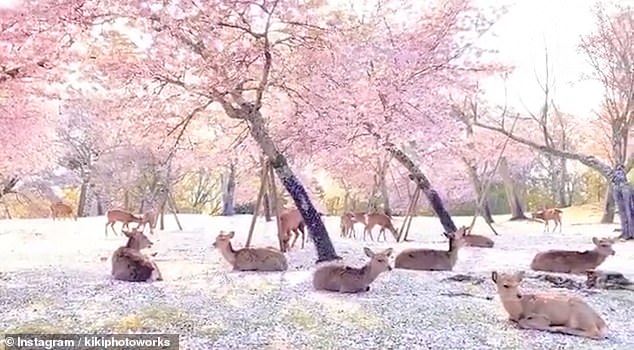 The PM imposed a state of emergency in early April, but Japan has begun easing its shutdown measures this month.

Businesses including cafes, bars and sports clubs have been resuming operations after the lockdown led to a record contraction of Japan’s services sector last month.

Japan has suffered at least 16,285 cases and 744 deaths from the coronavirus, not including those linked to the Diamond Princess cruise ship.

The country today declared a ‘full-blown recession’ after GDP fell by an annualised 3.4 per cent in the first quarter of 2020.

Toyota has said it will cut domestic vehicle production by 122,000 units in June and expects an 80 per cent drop in full-year operating profit.

The government has already announced a record $1.1trillion stimulus package, and the Bank of Japan expanded its own stimulus measures for the second straight month in April.

However, experts warn it could take at least two years for the economy to recover from the crisis.