President Joe Biden’s armored limousine has today come to a grinding halt outside a Pret coffee shop in central London as the world leader tries to reach Queen Elizabeth’s funeral at Westminster Abbey.

Biden and his wife Jill were seen in the back of the motorcade, known as ‘The Beast’, as it got stuck in the busy London traffic this morning.

Biden was seen waving to members of the public, who were shocked to see the US President drive past them near Marble Arch in central London.

While other world leaders, including French President Emmanuel Macron and New Zealand Prime Minister Jacinda Ardern, are arriving at Westminster Abbey for the Queen’s funeral in a fleet of buses, Biden was allowed to ride in The Beast.

But commentators have quipped that Biden might as well have taken the bus after video shows his motorcade rolling slowly through the streets of London before coming to a grinding halt outside a Pret coffee shop.

Video shows members of the public waving and taking pictures of the President as Met Police officers stood guard.

A member of the Met Police Special Escort Group was seen racing past the Beast on a motorbike to clear the traffic ahead. 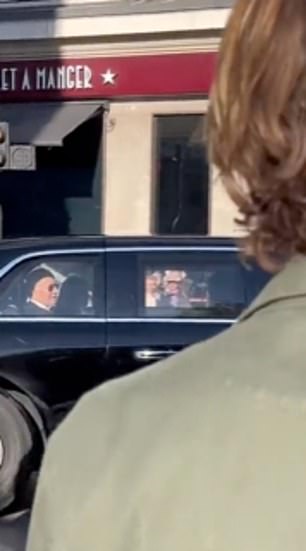 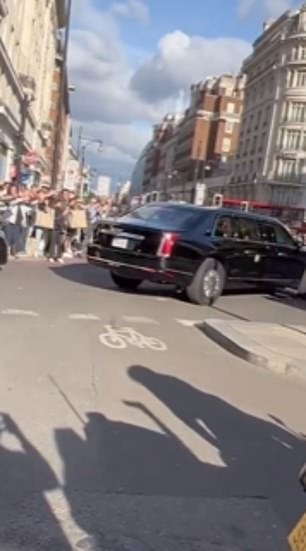 Biden and his wife Jill were seen in the back of the motorcade, known as ‘The Beast’, as it got stuck in the busy London traffic this morning 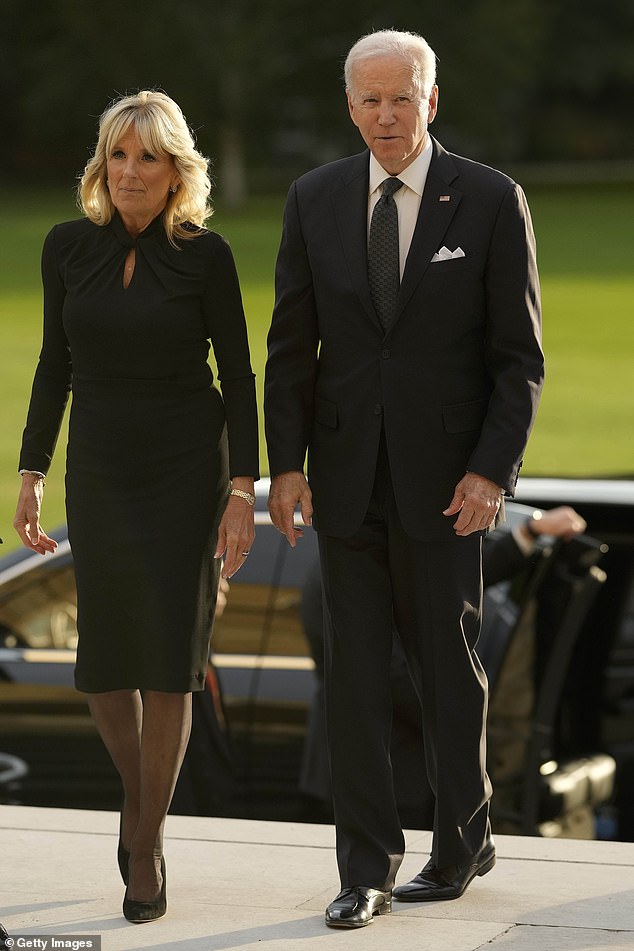 Biden and other world leaders, as well as top foreign dignitaries, spent yesterday at Buckingham Palace to pay their respects to King Charles ahead of the Queen’s funeral today – in what was described by some as the ‘reception of the century’.

During one of the largest gatherings of world leaders seen in recent years the newly crowned Monarch and his wife, Queen Consort Camilla, greeted Biden and Jill as well as French President Emmanuel Macron and his wife Brigitte, for the glittering but sombre event.

Such a reception involving world leaders and British royals has not seen since the death of Queen Elizabeth II’s father George VI in 1952, more than 70 years ago.

Biden paid his respects with Jill at the Queen’s coffin on Sunday and he described the monarch as ‘decent’ and ‘honorable’ and ‘all about service’ as he signed the condolence book, saying his heart went out to the royal family. 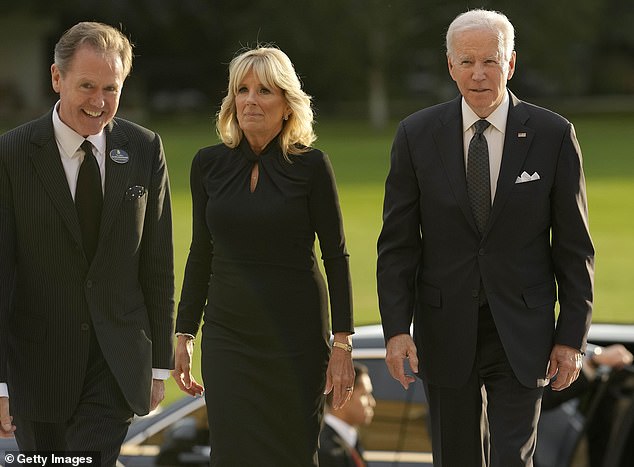 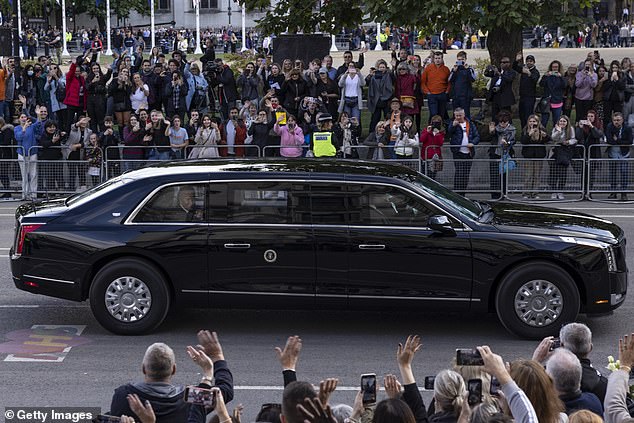 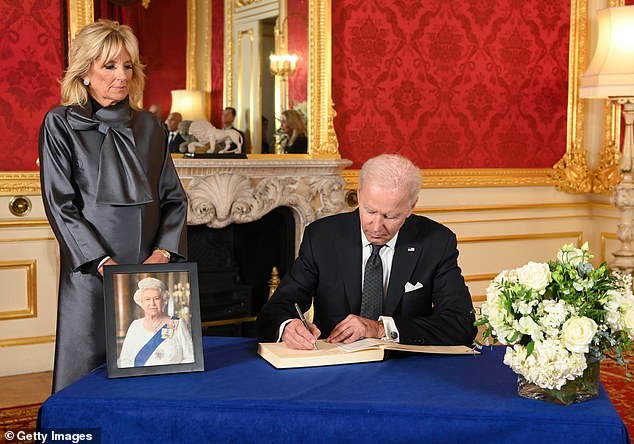 Biden paid his respects with Jill at the Queen’s coffin on Sunday and he described the monarch as ‘decent’ and ‘honorable’ and ‘all about service’ as he signed the condolence book, saying his heart went out to the royal family

Today, up to a million people are lining the streets of London to say a final farewell to the Queen, while leaders and royalty from across the world will attend her state funeral.

A day packed with funeral events in London and Windsor began early when the doors of 900-year-old Westminster Hall were closed to mourners after hundreds of thousands had filed in front of her coffin since September 14.

Many of them had spent cold nights outdoors to pay their respects around the queen’s flag-draped coffin in a moving outpouring of national grief and respect.

The closing of the hall marked the end of more than four days of the coffin lying in state and the start of the U.K.’s first state funeral since the one held in 1965 for Winston Churchill, the first of 15 prime ministers during Elizabeth’s reign.

For the funeral, Elizabeth’s coffin will be taken from Westminster Hall, across the road to Westminster Abbey, on a royal gun carriage drawn by 142 Royal Navy sailors. The same carriage was used to carry the coffins of late kings Edward VII, George V and George VI, and of Churchill.

The service, in the Gothic medieval abbey where Elizabeth was married in 1947 and crowned in 1953, will be attended by 2,000 people ranging from world leaders to health care workers and volunteers.

It will end with two minutes of silence followed by the national anthem and a piper’s lament, before the queen’s coffin is taken in a procession ringed by units of the armed forces in dress uniforms, with the queen’s children walking behind, to Wellington Arch near Hyde Park.

There, it will be placed in a hearse to be driven to Windsor for another procession along the Long Walk, a three-mile avenue leading to the town’s castle, before a committal service in St. George’s Chapel. She will then be laid to rest with her late husband, Prince Philip, at a private family service.