A magpie and his friend have been caught cheekily mucking around in an Australian backyard.

Hilarious video has resurfaced from 2016, shared to Reddit on Monday, showing the magpie take some time out from swooping to hang upside-down from a towel.

But his curious mate decided to disrupt his peace by playfully pecking at the chilled-out bird until he manages to coax him down. 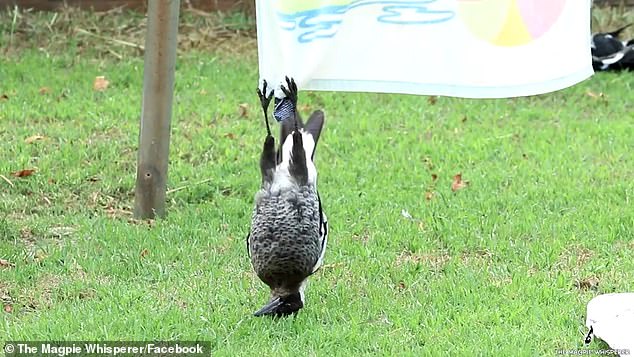 After a brief stand off the pair eye each other off before peacefully parting ways.

The uniquely Australian footage has caught the attention of amused social media users who questioned whether the bird thought it might be a bat.

‘Forgot what animal he was for a while there,’ one user wrote. 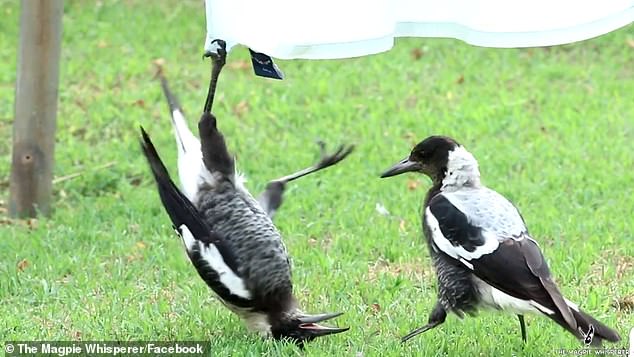 The video shows a more serene side to the notoriously aggressive bird known for its vicious attacks on cyclists and joggers.

Last month, a man was hiking through Thornleigh Gully at Mount Annan in Sydney’s outer south west about when a magpie launched a series of aerial attacks.

‘I was quietly walking by myself in the middle of the day along a path I use multiple times a day when I was swooped,’ a man named Brian wrote.

‘I dropped to the ground, cutting open my knee.’ 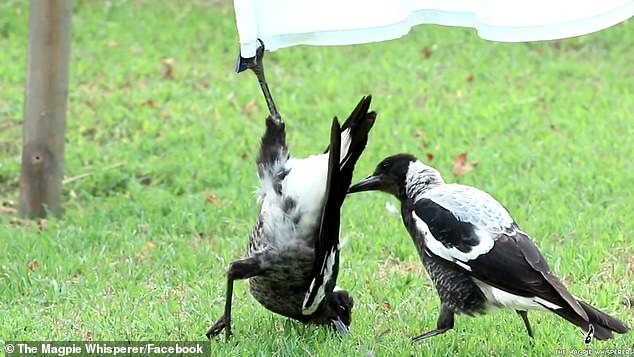 Reddit users were amused by the uniquely Australian footage, questioning whether the magpie thought it may be a bat

‘Having waited for a bit I got to my feet to walk away and the magpie swooped again. To get away without further attacks I got a lift home by my partner.’

The suburb is home to the Australian Botanic Gardens with many acres of parklands and there have been multiple reports of swooping magpies in the area this season.

Australia-wide there have been more than 4,500 magpie attacks reported on the site in 2021.

Magpie swooping season lasts from Spring to Summer with the native Australian birds protecting the territory in which they nest.