The Brits are back in Magaluf and partying as hard as ever as these pictures show.

Coronavirus and a new anti-trash tourism law approved at the start of the year for the area did not stop revellers jumping up and down on a parked car in party strip Punta Ballena as others broke into football chants that could be heard a mile away.

One youngster on the roof of the vehicle outside a fast food takeaway was replaced by another in a bright orange top who leapt onto the bonnet before waving his arms up and down to entertain the crowd of yobs.

A third man could be seen trying to jump onto the boot but appearing to struggle because of the state he was in.

The debauched scenes occurred around 2am on Friday as police reached the area to make sure bars closed on time. 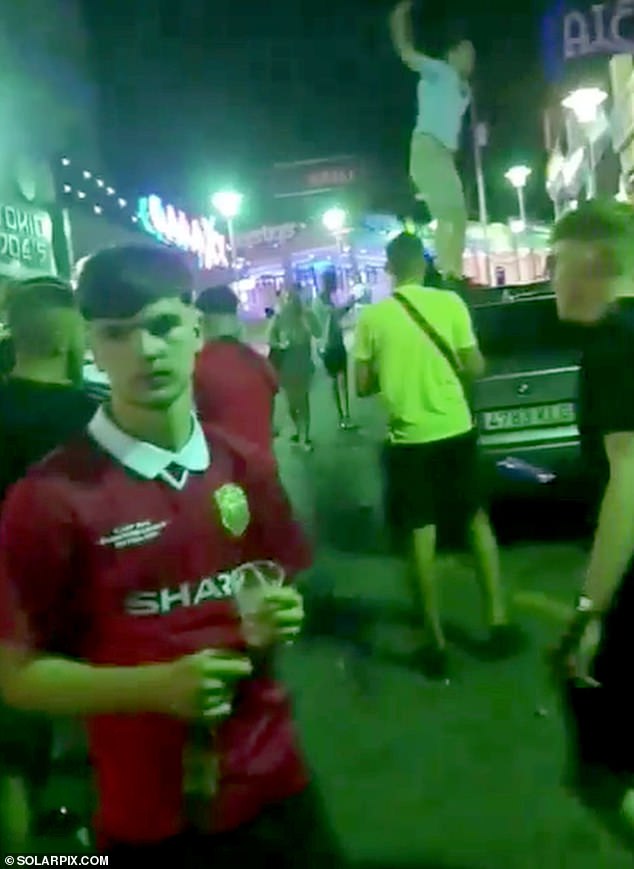 British revellers, who were not wearing face masks, made their return to the Punta Ballena party strip in Magaluf, Spain, shortly after 2am on Friday to begin their booze-fuelled holiday 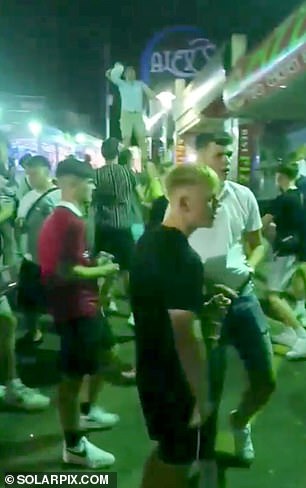 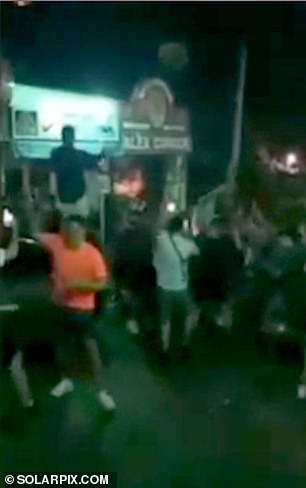 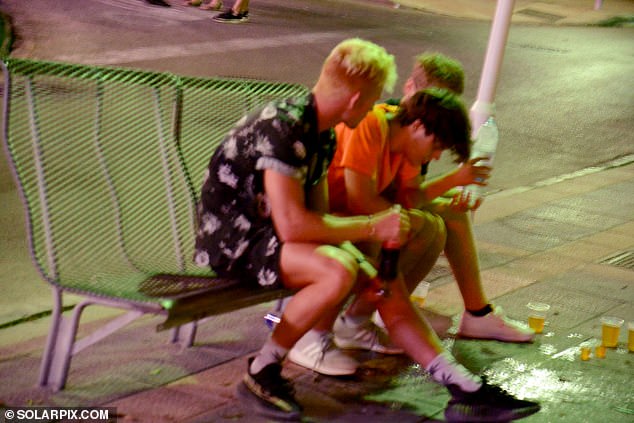 The scenes, which occurred on Friday as police reached the area to make sure bars closed on time, come as concerned residents predicted the problem would only get worse. Pictured: A man sits on a bench after a night of heavy-partying

One of the men filmed jumping up and down on the parked car, which was badly damaged, was arrested but released after several hours in custody.

None of the holidaymakers filmed were wearing any face masks, despite the fact there was no guaranteed social distancing and tomorrow rules on their use are set to be tightened throughout the Balearic Islands.

One angry local took to social media to rage: ‘Total chaos in Punta Ballena. Hundreds of sons of b££ches from Great Britain.

‘No face masks on, jumping on top of cars, drunk, drinking alcohol in the street. A disaster. Where’s the police? A f££king disgrace.’

Today concerned residents predicted the problem would only get worse in the coming weeks as more bars re-open and the number of British ‘sun, sex and sand’ holidaymakers jetting to Majorca grow.

One said: ‘At the moment the main six bars in Punta Ballena are open but in two weeks’ time everything’s going to be open so things are going to get worse unless the police manage to put a handle on it.

‘The scenes you saw the other night in Magaluf are the response to tourists’ anger at bars having to close at 2am.

‘There was no violence but it’s the sort of image the local authorities were hoping they wouldn’t have to see this summer.’

Magaluf town hall chiefs predicted earlier this year the coronavirus crisis could sound the death knell for the booze-fuelled brash tourism the party resort has been striving to kill off – but that was before Spain brought forward the re-opening of its borders to international tourism. 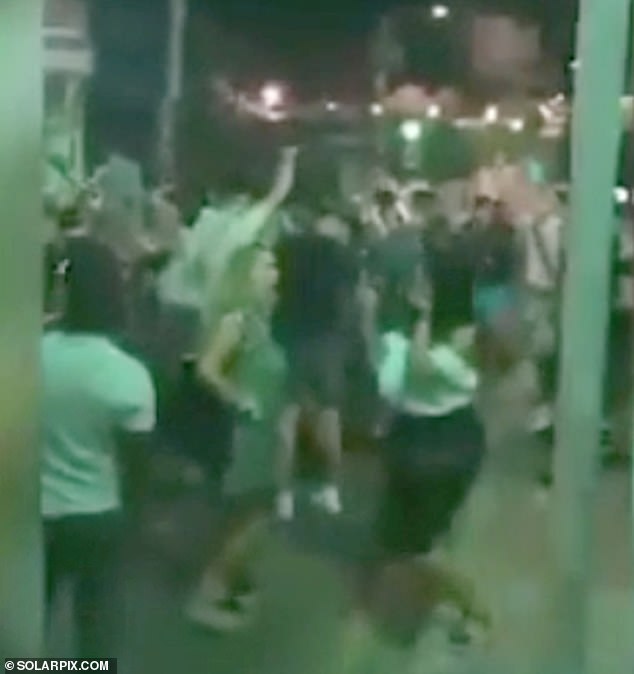 Despite the coronavirus pandemic, the British tourists flooded onto the street to dance the night away without wearing face masks 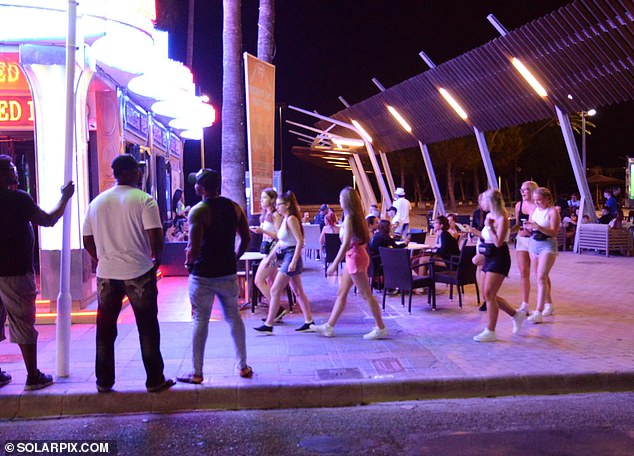 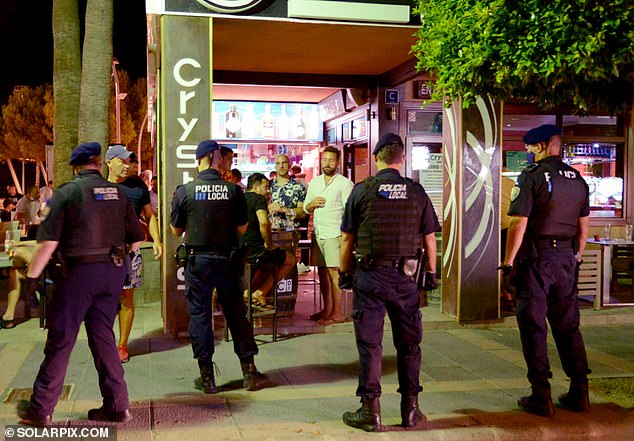 As the revellers continued to party, police officers reached the area to make sure bars closed on time

The number of Brit holidaymakers flying to Spain has been growing since June 21 when they were allowed in for the first time in three months.

Costa holidaymakers were given a boost on Friday after quarantine was scrapped for people arriving at English airports from Spain.

Brit revellers hoping to enjoy ‘Do what you want’ booze-fuelled holidays in Magaluf this summer were warned in June coronavirus wouldn’t stop police cracking down on them.

Balearics Islands tourism minister Iago Negueruela said his government would be ‘especially vigilant’ to police the decree designed to eradicate drunken tourism with fines for balcony-jumping and bans on booze cruises and drink offers like happy hours and 2×1.

And in comments echoed by local papers the tough-talking minister said local authorities would do everything possible to make sure the type of tourist they want to keep away from party resorts like Magaluf ‘don’t have the option of coming to our islands.’ 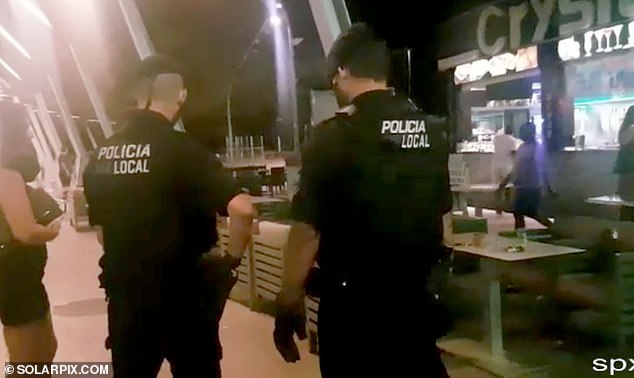 Mr Negueruela has been critical of Britain’s response to the coronavirus crisis, accusing it earlier this year of being too slow to adopt lockdown measures when Boris Johnson was still talking about pursuing his so-called ‘herd immunity’ plan.

The Balearics Islands government threw all its initial efforts into attracting holidaymakers from Germany as part of a foreign tourism pilot plan UK tourists were excluded from.

The anti ‘trash tourism’ decree approved in January was billed at the time as the first in Europe to restrict the promotion and sale of alcohol in specific areas of the Balearic Islands including Magaluf and San Antonio on neighbouring Ibiza.

It includes a three-drinks alcohol limit during meals at all-inclusive hotels, a pub crawl ban and fines of more than £50,000 for holidaymakers caught jumping from hotel balconies.