Boris Johnson will be forced to seek an extension to the Brexit transition period beyond the end of 2020 because of the coronavirus outbreak, it was claimed today.

The UK and the EU were due to hold a second round of face-to-face trade talks this week but they were scrapped because of the spread of the deadly disease.

The ‘standstill’ transition period is due to expire on December 31, giving the bloc and Britain nine months to hammer out the terms of their future relationship.

But UK government sources believe a request for an extension will be made ‘sooner rather than later’ because of the disruption caused by coronavirus.

Publicly Downing Street is absolutely adamant that the transition period will not be extended.

But there is a growing belief that the pandemic will ultimately force Mr Johnson to perform a U-turn. 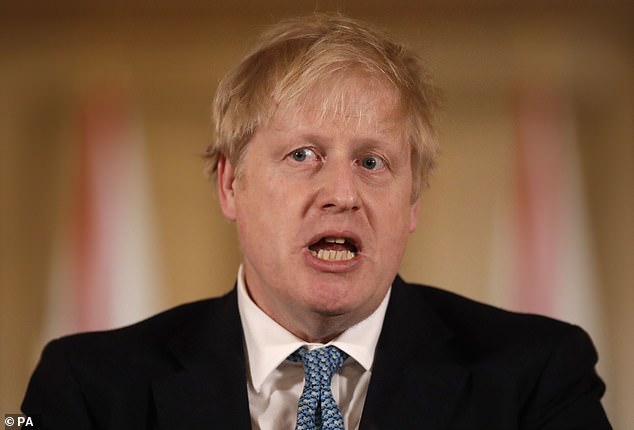 The two sides had been hoping to figure out a way to use video conferencing to allow this week’s talks to go ahead but nothing was agreed in time to make it happen.

A Downing Street source said the claim an extension would be sought was ‘totally untrue’.

The pace of Brexit trade talks has slowed right down because of the worsening spread of coronavirus.

One source told The Telegraph that the bloc has not ‘had time to properly go through our own text’ among the 27 member states on the specifics of what the deal should look like.

‘There were going to be in-depth meetings, but now they are cancelled,’ they said.

A government spokesman announced yesterday afternoon that this week’s talks had been cancelled.

‘In light of the latest guidance on coronavirus, we will not formally be convening negotiating work strands tomorrow in the way we did in the previous round,’ the spokesman said.

‘We expect to share a draft FTA [Free Trade Agreement] alongside the draft legal texts of a number of the standalone agreements in the near future still, as planned.

‘Both sides remain fully committed to the negotiations and we remain in regular contact with the European Commission to consider alternative ways to continue discussions, including looking at the possibility of video conferencing or conference calls, and exploring flexibility in the structure for the coming weeks.

‘The transition period ends on 31 December 2020. This is enshrined in UK law.’

Senior figures in the EU, including European Commission president Ursula von der Leyen, said before the coronavirus outbreak that there was not enough time for a deal to be agreed.

The outbreak has piled even more pressure on the UK to agree to a transition extension.

The Brexit divorce deal which took the UK out of the bloc on January 31 this year states that any decision on extending the transition period must be made before June. Both sides must agree to it for it to go ahead. 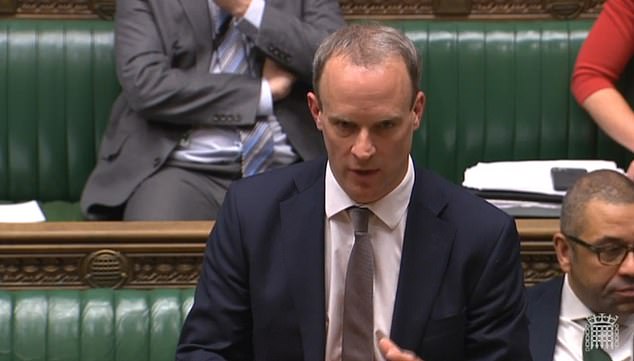 The cancellation of talks came after Dominic Raab, the Foreign Secretary, yesterday resisted calls from MPs to seek an extension as he said he believed talks could still be concluded this year.

He told the House of Commons: ‘As far as I am aware the negotiations can still proceed, given all of the logistical arrangements that we put in place.

‘We are confident that we can get this done. And actually I don’t think delaying Brexit negotiations would give anyone the certainty that they need on either side of the channel.’

Face-to-face talks between the two sides were due to take place in London this week after the first round was held in Brussels.

Critics have questioned the feasibility of conducting complex trade talks over a video link.