Organised crime gangs are enforcing their own coronavirus lockdown in Rio de Janeiro by ordering people to obey a curfew.

Threatening messages which circulated in the city’s notorious favelas warn that gangsters will teach people to ‘respect’ an 8pm shutdown, Brazilian media says.

‘Attention all residents of Rio das Pedras, Muzema and Tijuquinha! Curfew from 8pm today. Whoever is seen on the street after this time will learn to respect the next one,’ one message from the gangsters reads.

According to G1, another message says: ‘We want the best for the population. If the government does not have the capacity to fix it, organised crime will solve it.’ 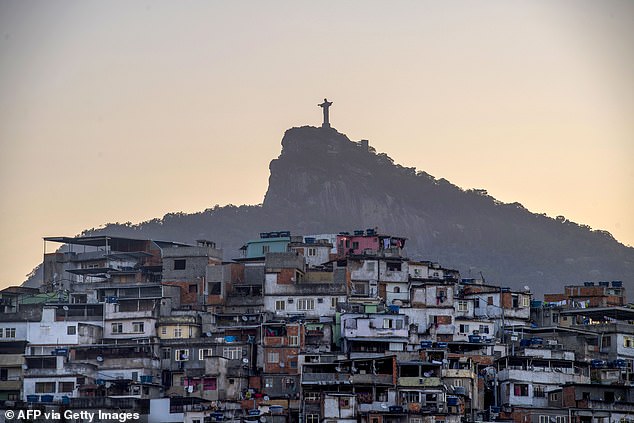 Warning: Residents of Rio de Janeiro’s infamous favelas – one of which is pictured in a file photo – have been warned to obey a curfew by organised criminals

The three neighbourhoods mentioned are all part of Rio’s sprawling favelas, which are disadvantaged by unsanitary housing and poor to non-existent health services.

The trafficking gangs which operate in the favelas have gone further than Brazil’s government, which has not imposed any national curfew.

Almost a quarter of Rio’s inhabitants, or 1.5million people, live in the crowded jumbles of tin-roof shacks and narrow streets.

On Saturday, a case of Covid-19 was confirmed in the City of God, a neighbourhood which inspired the 2002 film of the same name.

‘The irony is that the disease was brought to Brazil by plane, by the rich, but it is among the poor that it will explode,’ said Paulo Buss, director of the center for international relations at Fiocruz, a public health research center.

The favelas are often situated on the hills overlooking wealthy neighbourhoods. That is the case of the Tabajaras favela, which has a spectacular view of the famous Copacabana beach district below.

‘The nearest health centre is the same that the elderly people in Copacabana and tourists from all over the world use,’ she said.

The usual guidelines for how to protect oneself from the coronavirus, ‘social distancing’ and ‘barrier gestures,’ are difficult to apply here. 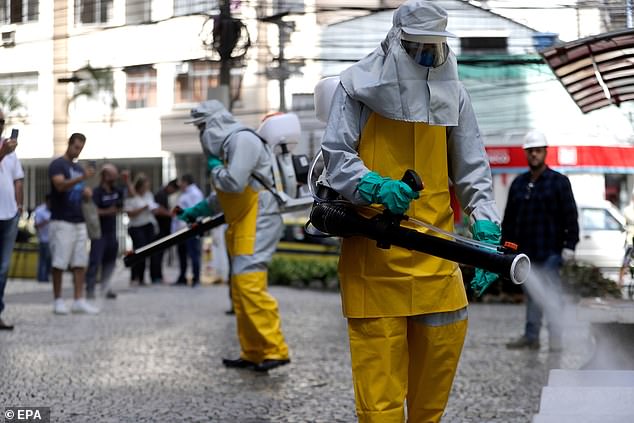 Rio city hall says it has ‘intensified prevention campaigns in the favelas,’ as the number of coronavirus cases in Brazil has shot to 1,546, with 25 deaths.

The standard advice from municipal authorities recommends that people who feel they may be infected self-isolate in a separate room from the rest of their family.

‘If your home only has one room, infected people should stay at least a metre (3ft) away from other family members,’ says city hall.

‘Official statistics show that most of the favela houses have two or three rooms, with five to eight inhabitants. How can you isolate an infected person in these conditions?’ asked Buss.

Beyond the high population density, unsanitary conditions in some dwellings also pose problems.

‘In the favela, most houses have few windows, which prevents good air circulation, prevents daylight from entering and promotes the spread of respiratory diseases,’ said Patricia Canto, pulmonologist at the National School of Public Health.

In particular, tuberculosis continues to wreak havoc in the favelas, with infection rates sometimes 10 times higher than the national average.

‘For the coronavirus, we say that we must protect the most vulnerable by talking about the elderly, but we must not forget the cases of social vulnerability,’ said Canto.

In addition, many people depend on the informal economy to make a living, and confinement risks taking away all forms of subsistence.

Rio has so far escaped the total confinement regime being experienced in much of Europe and neighbouring Argentina.

But schools and shops have been closed, as have beaches and other tourist spots, where many street vendors from poor neighborhoods sell their products.

‘People who do not have a formal job must continue to go out to work because they have no choice. Either they die of hunger, or they risk dying by catching the coronavirus,’ said Joelma Sousa, of the NGO Redes da Mare, located in a set of favelas near Rio’s international airport.