Lockdown-free Sweden has Europe’s highest Covid-19 death rate – but their economy is surviving: Retail sales are UP amid pandemic and GDP took a much smaller hit than UK’s

The UK is suffering far graver economic damage than Sweden after Britain imposed a lockdown and the Scandinavian country did not.

Britain’s GDP has already seen a larger slump than Sweden’s this year – with only one week of lockdown included in the figures so far.

The UK’s construction and retail sectors both saw their worst collapses on record in March, while production suffered its worst slump since the strikes of the 1970s.

Sweden is still expected to take a huge economic hit in 2020, but its GDP and budget forecasts are significantly less dire than Britain’s.

While the UK has paid a greater economic price, the lockdown has not led to much more favourable figures on cases and deaths.

Although Sweden’s death rate (6.08 per million in the last week) is the worst in Europe, Britain’s is only slightly better (5.57) even after two months of lockdown. 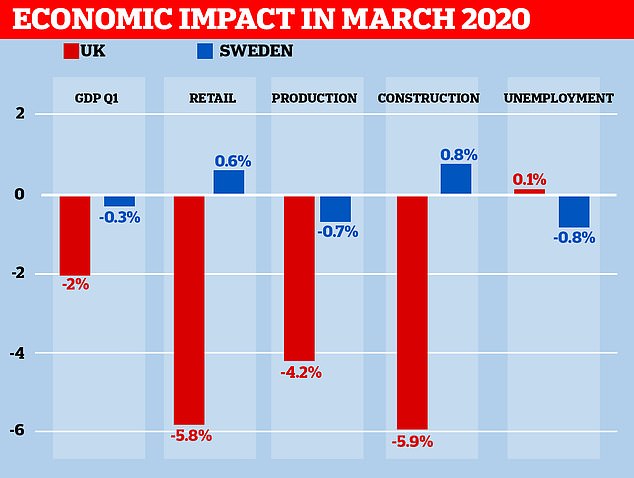 This graph shows how the UK’s economy has already been ravaged by the pandemic, with sharp falls in GDP, retail sales, industrial production and construction work – even when the latest figures include only a brief period of lockdown. The UK’s unemployment rate increased only slightly in the latest figures, but separate statistics show a nearly 70 per cent rise in the number of people claiming Universal Credit

This chart shows forecasts for the rest of 2020, with the UK’s GDP set to plunge by more than Sweden’s – while Britain is left with a larger budget deficit because of the cost of propping up the economy. However, the EU expects Sweden to have a higher unemployment rate this year 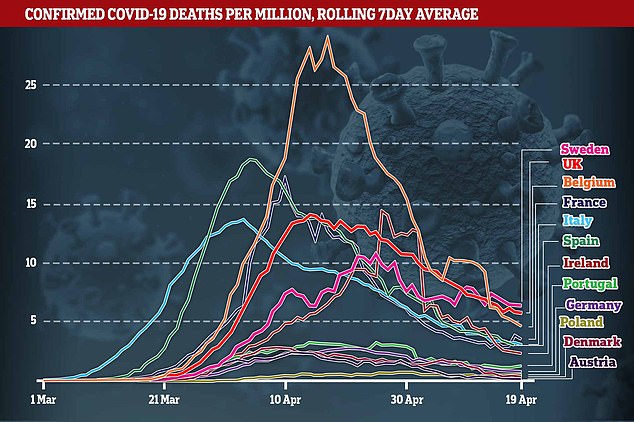 Britain’s per-capita death rate over the last week (5.57 deaths per million) is only slightly better than Sweden’s (6.08) even after two months of lockdown. Both countries have worse death rates than other European nations, as shown on this graph

Britain’s gross domestic product fell by 2.0 per cent from January to March, the worst slump since the global financial crisis of 2008.

The economy also shrank by 1.6 per cent compared to the same period in 2019, the worst such decline since 2009.

In Sweden – where the economy already had been shrinking in 2019 before the pandemic began – GDP fell by a less severe 0.3 per cent in the first quarter.

Economists say Sweden had a ‘strong start to the year’ before the virus began to ravage Europe in February and March.

The period in question includes only one week of full-scale lockdown in Britain, which was ordered by Boris Johnson on March 23.

Public health restrictions were already starting to take effect before that, but pubs and restaurants largely remained open until mid-March.

The figures for the April-June quarter will show the full effect of three months of lockdown, and economists expect those figures to be far worse.

The Bank of England has suggested that the economy could shrink by an astonishing 25 per cent in the current quarter.

In Sweden, the government has entrusted Swedes with ‘individual responsibility’ rather than imposing a full-scale lockdown.

However, the disruption to supply chains and collapse in tourism mean that the worst is yet to come despite the lack of quarantine measures.

The European Commission’s forecast for 2020 projects that the UK’s GDP will shrink by 8.3 per cent this year, before recovering with 6.0 per cent growth in 2021.

Sweden is expected to suffer a 6.1 per cent slump in GDP, a major recession but a smaller one than the projected EU average of 7.4 per cent. 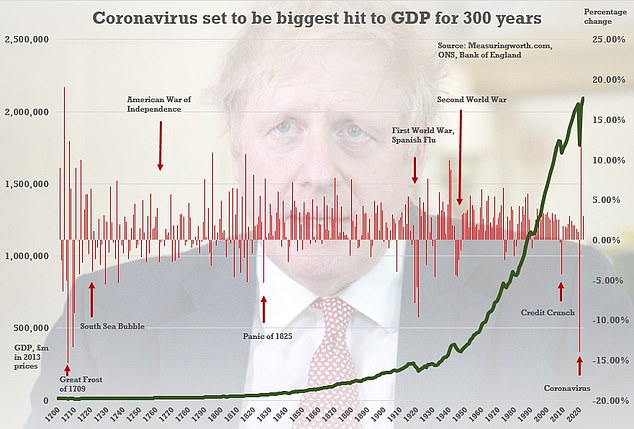 Apocalyptic predictions from the Bank and England and others show the UK is on track for the worst recession in 300 years, when the Great Frost swept Europe

Sweden was running a budget surplus before the pandemic arrived – and the country’s deficit is expected to be less dire than the UK’s at the end of 2020.

The European Commission expects the UK’s deficit to balloon to 10.5 per cent of revenue in 2020, up from 2.1 per cent last year.

Sweden ran a budget surplus of 0.5 per cent in 2019, but that is expected to become a deficit of 5.6 per cent this year.

Chancellor Rishi Sunak has extended the UK’s furlough scheme until October 2020, with workers receiving 80 per cent of their monthly salary up to a £2,500 limit.

However, he has indicated that companies will have to start ‘sharing’ the cost of the scheme from August as the cost spirals out of control.

Britain’s Office for Budget Responsibility expects the UK to require £298billion of borrowing in 2020/21, with £123billion of that attributable to coronavirus.

‘The downturn in the economy and the support measures taken lead to a large deficit in the central government budget and to increased government debt,’ it said.

The government has launched measures worth around £20billion to soften the blow and is offering a package of around £49billion in loans and guarantees. 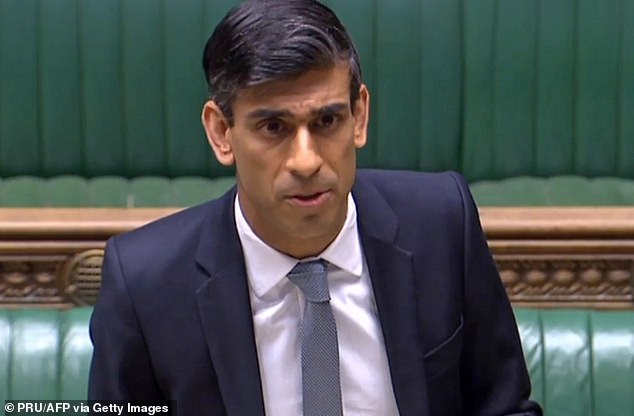 Britain’s retail industry shrank by 5.1 per cent in March, the largest fall since records began in 1996.

That included a staggering 28.4 per cent slump in clothing sales, according to ONS figures.

Boris Johnson has said that shops will not start to re-open until June, and then only if public health conditions are met.

Similarly, the closure of hotels, restaurants and bars caused a 31.1 per cent drop in the ‘accommodation and food services’ industry even at the start of the lockdown.

By contrast, food stores saw their strongest retail growth on record, with a 10.4 per cent increase linked to panic-buying at the start of the lockdown.

Online sales also reached a record high, accounting for 22.3 per cent of all retail as people switched to ordering online during the lockdown.

In Sweden, retail sales actually increased by 0.6 per cent in March 2020 compared to the same month in 2019.

However, the overall increase disguised a 3.8 per cent in sales of ‘durable’ goods such as clothes and furniture.

As in Britain, there was a sharp increase – 6.1 per cent – in ‘consumable’ products such as groceries.

Sweden has not ordered general shop closures, although business owners have been told to introduce their own social distancing rules.

Sweden is expected to suffer a smaller slump in GDP than Britain this year after keeping shops and restaurants open (pictured, people sit outdoors in Stockholm earlier this month)

The UK’s production industries suffered a 4.2 per cent fall in output in March 2020, the fourth-largest since records began in 1968.

The other three were all related to strikes in the 1970s, including the 1978-79 ‘winter of discontent’ which helped bring Margaret Thatcher to power the following May.

Output of machinery and equipment fell by 11.6 per cent, while the furniture industry saw a 17.0 per cent slump in production.

Clothes and textiles production dropped by a record 18.2 per cent, despite ‘anecdotal evidence’ of increased PPE production.

Nearly half (44 per cent) of exporters say they have been hampered by coronavirus-related travel restrictions in recent weeks.

Alcohol sales in shops increased in March 2020, but production fell by 6.9 per cent as pubs and restaurants were closed because of the pandemic.

The ONS said there was ‘some evidence of alcohol producers diversifying to a small degree to produce hand sanitiser,’ but not enough to reverse the overall slump.

In Sweden, industrial production fell by a less severe 0.7 per cent, or 0.2 per cent compared to the previous year.

Car manufacturer Volvo has warned of stalling truck orders and a ‘new normal’ of feebler demand because of the virus.

The Gothenburg-based firm suffered its worst fall in demand since the 2008 crisis, when there were more cancellations than new orders for a full quarter.

Both countries are expected to see huge drops in exports in 2020, with falls of 10.7 per cent in Britain and 12.0 per cent in Sweden.

That is potentially a larger blow to Sweden, where exports make up a larger share of GDP than in the UK. 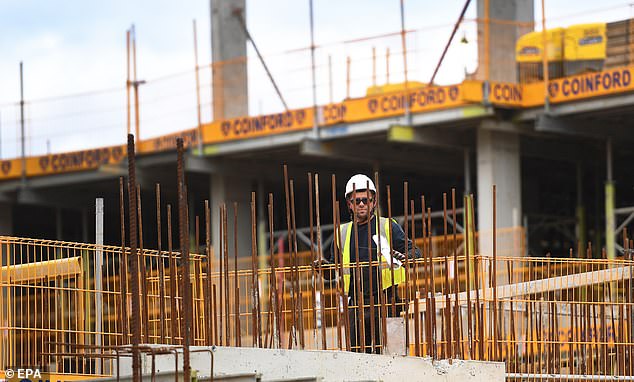 A construction worker at a building site in London last week, after Boris Johnson said they should be encouraged to return to work

The UK’s construction industry collapsed by 5.9 per cent in March 2020, the largest fall since monthly records began in 2010.

The slump was caused by a 6.2 per cent fall in new construction work and a 5.1 per cent drop in repair and maintenance work, according to the ONS.

Construction makes up around 6.1 per cent of the UK economy, and there were knock-on effects on the output of materials such as cement, plaster and concrete.

Boris Johnson said earlier this month that people should return to work at construction sites as the UK starts to lift the lockdown.

EU figures show that Sweden recorded 0.8 per cent growth in the construction sector from February to March.

The quarterly figure was down by 6.8 per cent, but that reflected a large fall in January 2020 when the virus was still having minimal economic impact in Europe.

Benefit claims in the UK soared by nearly 70 per cent in April after companies were forced into massive lay-offs by the pandemic.

The Office for National Statistics (ONS) said claims under Universal Credit surged by a record 856,000 from March to April, reaching 2.1million.

The actual unemployment figures are less up to date, but figures showed 50,000 more people becoming jobless from January to March.

Economists expect that figure to get worse despite the government’s enormous job retention scheme to pay the wages of furloughed workers.

Early estimates for April 2020 indicate that the number of paid employees fell by 1.6 per cent compared with March, as firms began to feel a greater impact.

Job vacancies also significantly decreased, with the number of empty posts in the three months to April diving by 170,000 to 637,000.

The position in Sweden is similar, with the full effect of the pandemic not yet visible in the monthly figures.

The monthly unemployment rate actually decreased to 6.7 per cent in March, compared to 7.5 per cent in February.

However, separate weekly figures have shown a rate of 8.4 per cent in mid-May, suggesting that the April and May figures will show a far worse picture.

‘Worst affected were employees on flexible and short-term contracts, particularly in the hotel, restaurant and retail sectors.’

Further figures show that 56,133 people had been given notice in the period from March 1 to April 12.

Sweden’s unemployment rate is expected to be 9.7 per cent for the whole of 2020, worse than Britain’s projected figure of 6.7 per cent.