British biker, 70, is killed and monk ‘brother-in-law’ sitting in his sidecar is seriously injured after being hit by a pick-up truck in Thailand

A 70-year-old British biker has been killed and his brother-in-law monk seriously injured after the pair were hit by a pick-up truck in Thailand on Sunday.

The British expat has been named only as David, while the monk – who was sitting in the bike’s sidecar – has been named as 59-year-old Phra Wasant Boonkham.

The side car was reportedly hit from behind by the pick-up-truck driven by a woman who told police that she was driving to visit her younger sister.

The accident occurred at around 8.30am on the Phimai-Chum Phuang road in Thailand’s Phiami district. 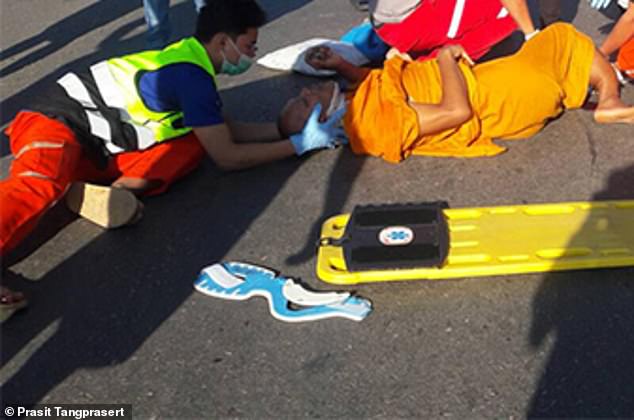 Pictured: Rescue volunteers help 59-year-old Phra Wasant Boonkham – a monk – who was riding in a sidecar when it was hit by a pick-up in Nakhon Ratchasima, Thailand on Sunday

The British man – David – was killed in the crash, while the monk suffered two broken legs.

A photograph taken at the scene showed the monk lying on the ground while being treated by paramedics and rescue volunteers, as a crowd gathers on the side of the road.

Kanchana Boonkham, 41, David’s wife, told local media that her husband was taking the monk, her elder brother, from their house back to Wat Suntarikaram temple at Ban Taban when the accident occurred.

The temple is less than a mile away from where the accident occurred.

According to the New York Times in 2019, Thailand has the world’s second highest rate of road deaths per-capita – second only to war-torn Lybia.

When it comes to motorcycle deaths per-capita, the country ranks number one.