Hundreds of desperate British pensioners have mutinied aboard a cruise ship headed for the epicentre of the Coronavirus pandemic in Italy, MailOnline can reveal.

The Costa Pacifica ship, which left Argentina on 3rd March with up to 3,780 passengers aboard, docked in Marseille last night. There were 36 people on board infected with the virus.

But there was outrage when the French authorities barred all non-French citizens from coming ashore.

British holidaymakers, as well as those of other nationalities, then discovered that they were to be taken on to Genoa, close to Lombardy, the epicentre of the Covid-19 outbreak.

Scroll down for video. 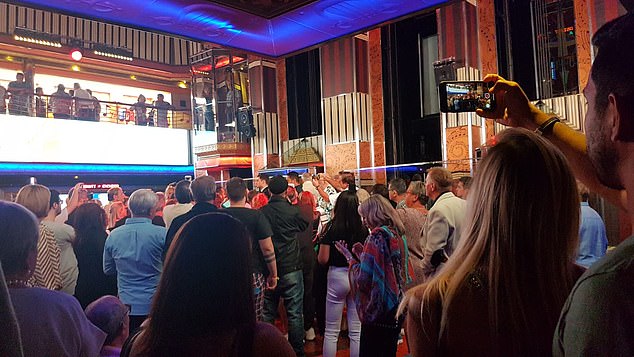 When questioned, crew admitted that the plan was to fly them back to Britain from Italy – ignoring the fact that Italian planes are largely grounded.

Non-French passengers had to be taken to Italy because Costa Cruises, the operator, is based there, the crew said. It comes as the Italian army prepares to impose a lockdown on Lombardy.

Shocked British OAPs, many of whom suffer from underlying health conditions, attempted a mutiny, barging into the ship’s control room to warn passengers over the intercom that they were heading for the world’s most dangerous pandemic area.

After a scuffle, they were ejected from the control room. Two pensioners – Terry Guest, 72, a pet shop owner from Oxfordshire, and Robin Howard, 75, a retired engineer – then marched into one of the theatres during a performance and stormed the stage, seizing a microphone and telling the audience that they were all in grave danger.

‘All the passengers went mad. They were clapping and cheering,’ Mr Guest told MailOnline. ‘We demanded that the captain come to explain himself, and eventually he sent his deputy.

‘We refused to accept that, and eventually the captain himself appeared with five bodyguards. He just told us we were going to Genoa and that was it, no ifs or buts. Then he walked off.

‘After that, things got a bit wild. The Brazilians and Argentinians got very heated and were a bit violent towards the staff.

‘Tempers were boiling over. People were threatening a girl who worked for Costa and I had to stand in front of her. 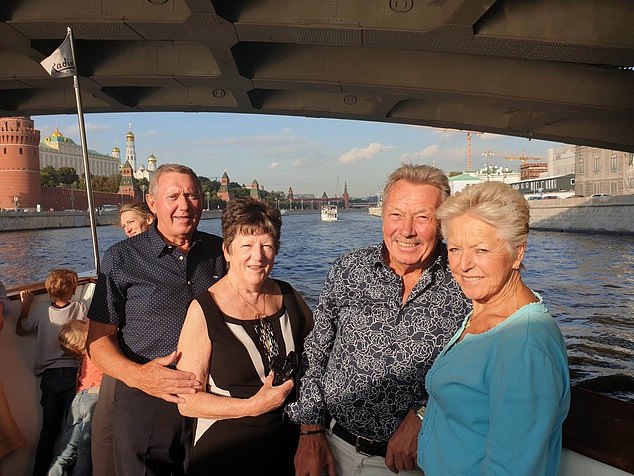 Pictured: Robert and Jacqueline Marshall (left) and Robin and Jann Howard (right) aboard the ship which is due to dock in Genoa tomorrow 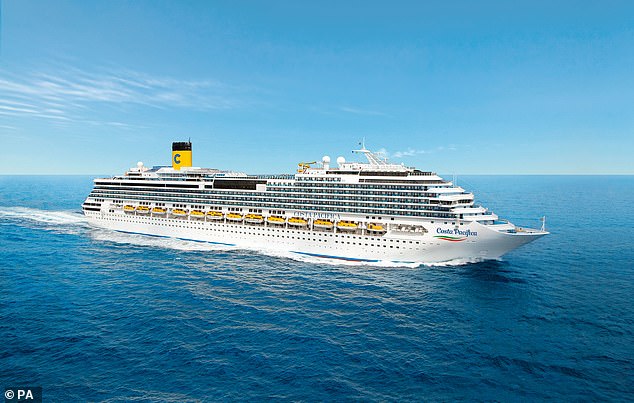 ‘The whole thing lasted about an hour-and-a-half. We left it in the end because we were too upset.’

Passengers had planned to block the French citizens from disembarking the vessel but they changed their minds amid fears of arrest.

After allowing French citizens ashore, the ship departed quickly for Genoa and is currently en route as the clock ticks down before the 1,500 remaining pensioners are in danger.

There are at least 214 British citizens aboard, as well as some who may be dual nationals. 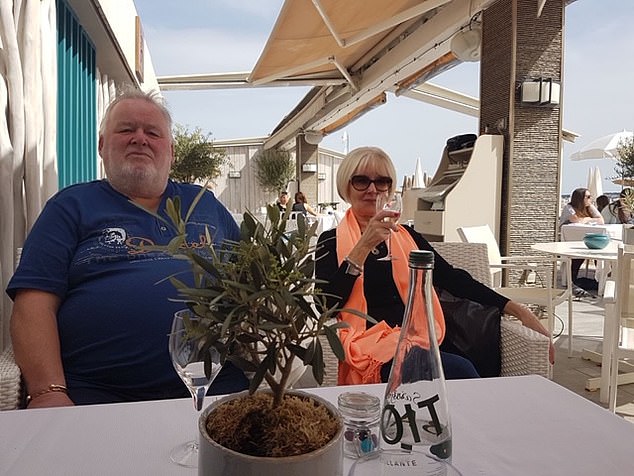 Passengers had planned to block the French citizens from disembarking the vessel but they changed their minds over fears of arrest. Pictured: Terry and Marie Guest

‘For three days, the crew had told us that we were all getting off in Marseilles and flying home,’ Mr Guest said. ‘It was all flannel. They were lying to us.

‘I’m very worried as I had to pay £1,500 for special holiday insurance because I have pancreatitis and respiration problems. That insurance runs out today, meaning that I’m not covered for any medical bills.

‘What happens if I get Coronavirus? I’ll just be left out in the street.’

The Costa Pacifica has already been at sea for almost two weeks, as passengers were unable to disembark at any of the scheduled ports due to Coronavirus.

Some were due to leave the ship in Barcelona but the port was closed amid Coronavirus fears. The last time any of the holidaymakers set foot on dry land was in Brazil on 9 March. 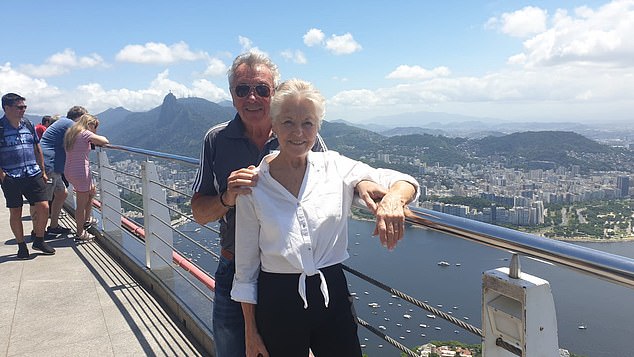 The Foreign Office has already sent their local team in Milan to Genoa to meet the passengers when they arrive. Pictured: Jann and Robin Howard, both aged 75

A Foreign Office source said that there are currently no confirmed cases of Covid-19 aboard the Costa Pacifica.

Danielle Stradling, whose in-laws are stranded aboard, said: ‘My husband has spoken to the Foreign Office. They said they were aware of the situation onboard the Costa Pacifica and that their global response team was dealing with it as their highest priority.’

Ms Stradling said: ‘The French government are refusing English entry to France. The Foreign Office stated that they don’t know what to do and that this is the worst possible outcome.

‘They were very transparent. Right now, it’s their biggest priority, they said, and they assured us that they’re trying everything. 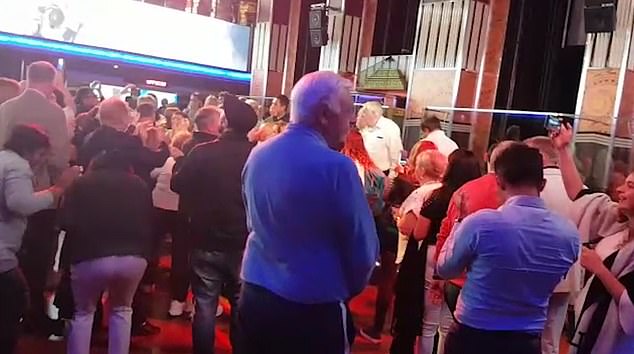 ‘The Foreign Office has already sent their local team in Milan to Genoa, so they won’t get an update until passengers arrival in Northern Italy.‘Costa Cruises have advised the Foreign Office that Britons will be given sanitised buses for travel arrangements. But that’s all the information they have.’

Robert Marshall, 75, a passenger trapped aboard the ill-fated ship, added: ‘We’re in a pickle and there’s nothing we can do about it. Everybody is up in arms. We need to have our voices heard to put pressure on the Foreign Office and the French.

‘We’ve heard almost nothing from the captain. He’s letting his underlings bear the brunt. The cruise company clearly only has its own interests at heart. It’s bloody terrifying.’ 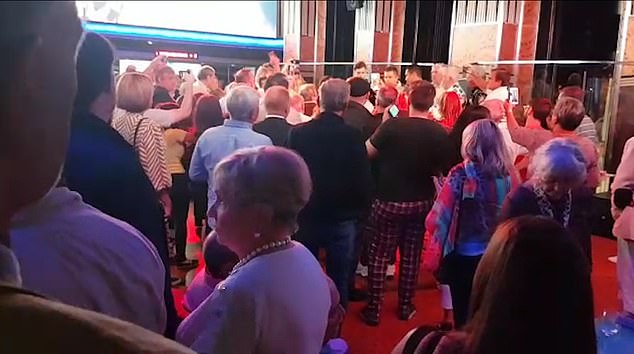 Costa Cruises said that the ship will arrive in Genoa, the final call for her itinerary, on the March 21st, where all the remaining guests currently on board will disembark and will return home

A Foreign Office spokesman said: ‘We are doing all we can to help British people on board the Costa Pacifica cruise ship.

‘Our staff are in close contact with the cruise operator and the authorities in the region to ensure British people can get home safely.’

Any questions regarding the repatriation of British nationals should be directed towards Costa Cruises, the spokesman added.

A Costa Cruises spokesman said: ‘Costa Pacifica disembarked the French guests and left the port of Marseille. The ship will arrive in Genoa, the final call for her itinerary, on the March 21st, where all the remaining guests currently on board will disembark and will return home.

‘Unfortunately, the French Authority did not allow the disembarkation of any other nationality in Marseille due to the recent decisions of the Government to restrict travel in the country.

‘Costa Crociere is working endlessly to find the best travel plan solutions to guarantee a safe journey back to the guests’ original destination. Once disembarked, Guests will be accompanied to their flights and transfers, organized by Costa through a sanitary cordon of isolation.

‘All health procedures have been agreed according to latest international guidelines. At the moment he health situation on board is regular and does not present any issue.

‘Monitoring and screening onboard is kept ongoing to make sure the situation is under control and preserve the health of guests and crew before their disembarkation.’