Detroit is planning a rapid mobilization of its engineering and manufacturing might unseen since the second world war, switching from making cars to making ventilators as the Covid-19 pandemic brings the US to breaking point.

With coronavirus cases surging, not least in Detroit, demand for ventilators is outpacing hospitals’ supply and people are dying without the machines. Now the US’s largest car manufacturers are stepping in. General Motors plans to begin producing 10,000 ventilators per month by mid-April, and Ford hopes to produce 50,000 of the devices in the next 100 days.

But producing ventilators and automobiles are two very different processes, and retooling auto factories to make ventilators presents a daunting logistical challenge. Can Detroit really save the nation from its growing ventilator crisis?

Kristin Dziczek, vice-president of research with the Center for Automotive Research, said she was initially skeptical. Automakers have already had success producing personal protection equipment like face shields and surgical masks, Dziczek noted, but she’s been “amazed” that they seem to be successfully gearing up to produce far more complex ventilators.

“I knew the industry had something to offer, though I never thought it could actually produce ventilators. But, in fact, that’s what they’re going to do,” Dziczek said.

And they need to solve those issues immediately. American hospitals have about 160,000 ventilators, and only about 65,000 of the machines designed for the most severe cases. Critical care units in hotspots like New York City and Detroit already have a shortage. Eventually, up to 740,000 ventilators could be needed, according to the Johns Hopkins Center for Health Security.

Ventilators are designed to push air through a tube and into the lungs. They are in high demand because Covid-19 attacks the lungs, and people with severe cases need extra oxygen to survive.

Once in production, the devices won’t roll off the lines at Ford or GM’s behemoth, robot-filled plants that produce F-150 pickups and Sierras. Instead, the machines will be assembled largely by hand at Ford’s Rawsonville Plant in Ypsilanti Township, Michigan, and GM’s Kokomo, Indiana, facility. 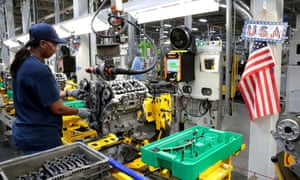 The latter is a relatively trim 2.6m-sq-ft plant resembling a clean office building more than a gritty factory, and it is where GM produces small electrical components for cars. Similarly, when it isn’t idled, Ford’s 1.7m-sq-ft Rawsonville plant produces components such as transmission oil pumps, battery packs, and air induction systems.

The companies are utilizing those facilities because they are where “a bunch of smaller parts arrive, then are assembled into larger parts”, said Mark Schirmer, public relations director with Cox Automotive. “They’re then shipped to the assembly plants to be installed in vehicles on the large assembly lines.”

The process for manufacturing ventilators is similar, he added.

“Imagine someone at a desk putting together a complex puzzle or model by hand – lots of small-part assembly,” Schirmer said, adding that the real challenge was “getting all the necessary parts together in one place for workers to assemble them”.

More than 700 parts compose the VOCSN critical care ventilators that GM is partnering with Seattle-based Ventec Life Systems to produce in Kokomo, and the automaker has tapped more than 100 suppliers to feed components. The ventilators are sought after by hospitals because they are five-in-one, portable machines with critical care ventilators, oxygen concentrators, cough assistance, suction and nebulizers.

By contrast, Ford is producing a simple ventilator design, which will be licensed by GE Healthcare from Florida-based Airon and operate on air pressure instead of electricity. Ford and GE designers have essentially stripped down a machine used for anesthesia that functions as a ventilator.

Aside from sourcing components from suppliers, Ford is repurposing parts that are “useful in production of other items”, its chief executive, Jim Hackett, recently told CBS This Morning.

“We’re going into our parts bins to see what can be done,” he added.

Concurrently, the automakers are helping boost production at their partners’ facilities – Ventec currently produces about 200 ventilators monthly, and GM is using its suppliers and logistical team to help the company push out about 10 times that figure. Meanwhile, Ford said it was helping ramp up GE’s capacity.

Labor is perhaps the easiest challenge for the companies to solve, partly because ventilator production is not a labor-intensive job. Cox said it had found one of the nation’s largest ventilator manufacturers only had about 10,000 employees worldwide.

Automakers are asking United Auto Workers employees to volunteer to work in three shifts. Ford said it would need about 500 employees, while GM is staffing Kokomo with about 1,000.

“If this does move forward as promoted, it won’t be like world war two when automotive plants were changed over to produce tanks, planes and plane engines,” Schirmer said.

The effort got a boost when Donald Trump invoked the Defense Production Act – wartime legislation that will allow automakers to avoid certain patent issues and provides the president with the ability to compel companies to prioritize government orders over those of other clients.

As he announced the measure, Trump also criticized GM over the ventilators’ price. However, both automakers have said they won’t profit off of the project. Ventec’s ventilators can cost about $18,000 each, far cheaper than the more sophisticated models, which can run up to $50,000.

The federal government is also accommodating automakers by waiving Food and Drug Administration (FDA) rules to allow non-medical manufacturers to quickly produce the devices. Among other changes, it is not enforcing rules that require ventilator manufacturers to gain FDA approval before making slight changes to their devices.

“If you want to help expand production of ventilators to save American lives in this pandemic, we are going to work with you to sweep every possible barrier out of your way,” the FDA wrote in a 22 March statement.

Sadly, many of those ventilators will be needed in Detroit. As of Saturday, the city had recorded more than 3,550 confirmed cases and more than 117 deaths from the coronavirus pandemic. Michigan had seen close to 13,000 cases and close to 500 deaths. For those with the disease, Motor City’s ventilators can’t come soon enough.