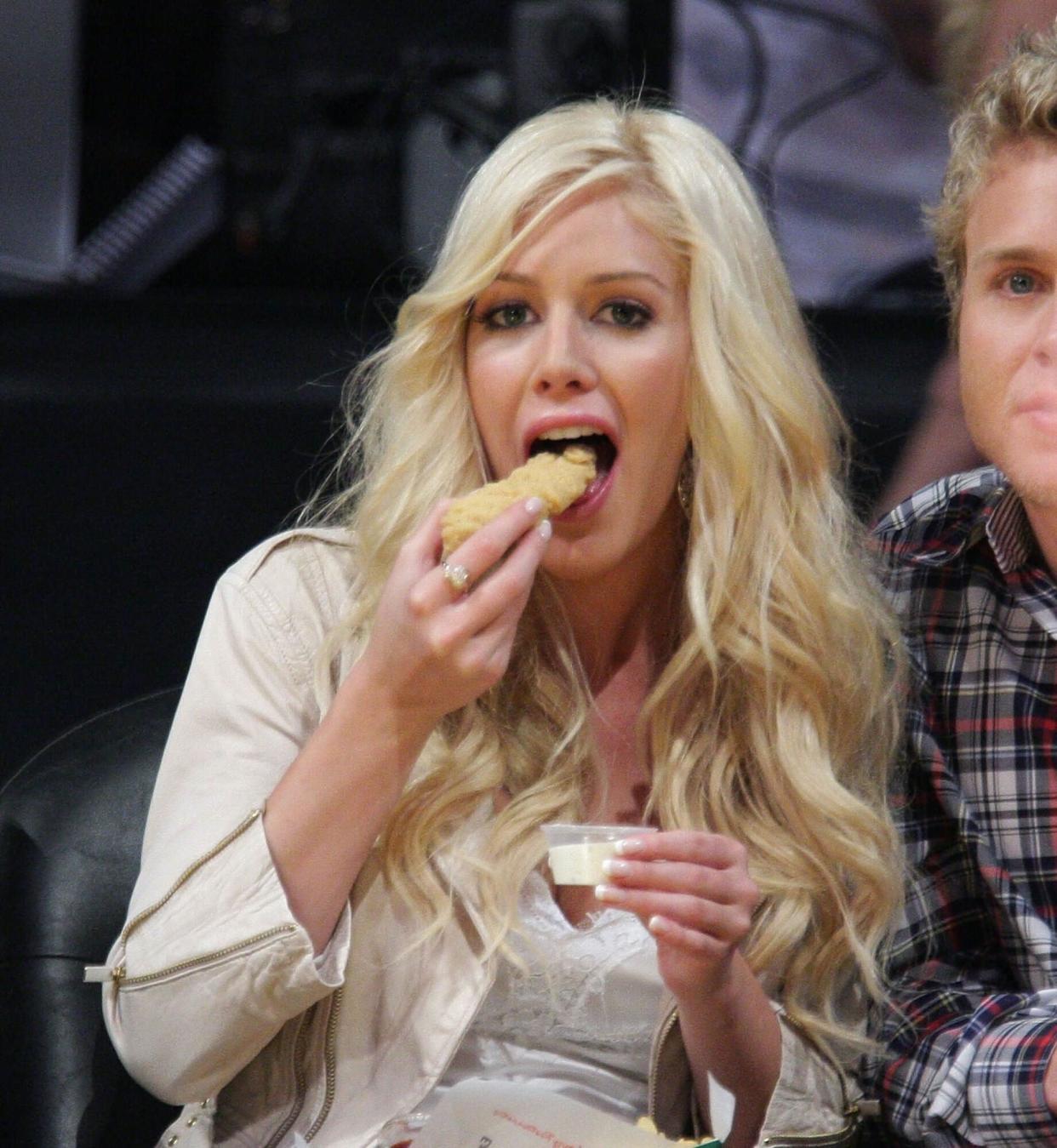 Heidi Montag has been seen eating more meat to help with her fertility. Unclear whether that was the case with this chicken strip in 2009.

Naturally, many have raised questions about this bizarre practice. Has she truly developed an affinity for raw meat, or is she just trying to one-up Lady Gaga (who remembers that iconic meat dress?)? Turns out, Montag has been trying the carnivore diet in an attempt to get pregnant with her second child.

"I have been trying to get pregnant for over a year and a half, I'm willing to try different things," she told People. "It's a great source of nutrients! I have felt incredible on this diet. A lot more energy, clarity, increased libido, and overall improvement on chronic pain I have had."

But can this diet really boost fertility? Or is this yet another potentially dangerous diet trend that's better to skip? Here, we'll examine the ins and outs of this meat-heavy diet—the benefits and drawbacks, what followers typically eat, and whether it's something you should try if you're hoping to score a positive pregnancy test in the near future.

What Is the Carnivore Diet?

"The carnivore diet stems from the controversial belief that human ancestral populations ate mostly meat and fish and that high-carb diets are to blame for today's high rates of chronic disease, including infertility," says Jenna Turocy, M.D., a fertility specialist with Columbia University Fertility Center in New York City.

Low-carb and even zero-carb diets have been trending on social media sites for many years now, with claims of rapid weight loss, lower blood pressure, and better-regulated blood sugar. The carnivore diet is simply a variation of these diets; it's a zero-carb diet that encourages adherents to eat only meat, fish, and other animal products like eggs. On the extreme end, some strict followers of this diet eat raw meat.

Paul Saladino, M.D., author of The Carnivore Code, is today's biggest proponent of the carnivore diet, and his website outlines exactly how to follow it, including recipes and meal plans, along with podcasts and blog posts touting the benefits of a meat-only diet.

A note about eating raw meat

Like Heidi Montag, who recently posted an Instagram video where she could be seen consuming raw liver, some followers of the carnivore diet choose to incorporate raw meat into their diet, instead of cooking all of the animal products they consume. Dr. Saladino's team claims there can be some benefits to eating raw meat, especially when it comes to fertility.

"Many of the nutrients in organ meats are very heat-sensitive, and thus eating organ meats raw ensures that the nutrients and peptides are preserved in their bioactive state," says a member of Saladino's team.

But it's important to remember that eating raw meat puts you at risk for contracting a number of foodborne illnesses such as salmonella, E. coli, and other bacterial infections, says Dr. Turocy. "This can be particularly harmful in early pregnancy and increase the risk of miscarriage." As such, Parents does not condone the practice of eating raw meat under any circumstance. But, if you do decide to try this, we recommend consulting with your doctor first to ensure you're consuming raw meat in the safest possible way.

Dr. Saladino is of the belief that the vast majority of infertility cases, both in women and men, are simply a result of diet. "I believe that addressing metabolic health is a huge factor in treating PCOS," he asserts. "Animal-based diets remove the inflammatory dietary polyunsaturated fatty acids (PUFAs) that I believe are the primary driver of insulin resistance. A few months of low-carb, animal-based dieting is one of the best interventions for metabolic dysfunction."

Despite that, Dr. Turocy says, "Currently, there is no scientific evidence that proves adhering to the carnivore diet can boost fertility. It's likely this notion has been perpetuated by the fact that some [people] with ovulatory dysfunction such as PCOS may benefit from lowering their intake of carbohydrates which can lead to weight loss, improved hormonal profiles, and more regular ovulation."

Instead, Dr. Turocy says to remember that moderation is key to a healthy lifestyle. "I recommend patients avoid extremes when it comes to following any particular diet. The best way to get and stay pregnant is to eat well, which includes less processed foods and more nutrient-rich foods like fruits and veggies—which would be prohibited if strictly following the carnivore diet—and enjoy your favorite treats once in a while."

Alleged Benefits of the Carnivore Diet

Despite the lack of scientific evidence that the carnivore diet can help you get pregnant, there are some purported health benefits. When considering the alleged benefits of the carnivore diet, it's important to remember that there are conditions that can be exacerbated by eating only meat (more on that later).

Before changing your eating habits and switching to a meat-only diet, it's crucial that you speak with your doctor first. Taking things a step further, it's even a good idea to have a comprehensive physical along with a complete metabolic panel of bloodwork. That's because conditions like high cholesterol and cardiovascular disease may be a dangerous combination with the carnivore diet.

Below, we've listed some of the things fans of the carnivore diet say they notice while adhering to it:

Who Should Avoid the Carnivore Diet?

The carnivore diet should be completely avoided by anyone with a history of high blood pressure, high cholesterol, stroke, or cardiovascular disease, says Dr. Turocy. That's because most meat products are high in saturated fat and cholesterol, both of which can elevate bad cholesterol and increase your risk of heart disease.

Should You Try the Carnivore Diet to Get Pregnant?

The short answer: No.

Ironically, trying the carnivore diet to boost fertility can actually be harmful to a healthy pregnancy, says Dr. Turocy. "Eating raw meat as part of the carnivore diet can be potentially dangerous particularly for [people] who are trying to conceive or get pregnant," she says. "[People] who are trying to conceive may not know when they are pregnant in the first trimester which is a critical time for baby's organ development. Eating raw meat puts you at risk of some of the most serious types of food poisoning. If you are infected while you are pregnant, you can pass the disease on to your baby increasing your risk for miscarriage, stillbirth, and birth defects."