China has launched a crackdown on its online outlets to curb what it calls ‘fake news’ amid the coronavirus pandemic.

Officials have deleted more than 6,000 articles and closed over 18,500 accounts since March, the country’s internet watchdog said today. 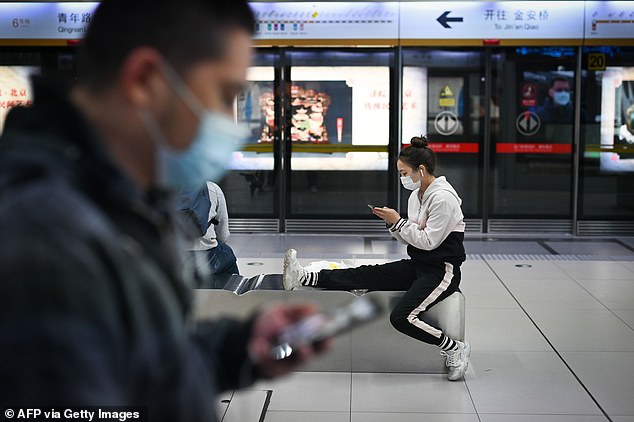 The Chinese internet watch dog has deleted more than 6,000 articles and closed over 18,500 online outlets during a web clampdown during the coronavirus pandemic. Pictured, a woman wearing a face mask uses her mobile phone at a subway station in Beijing on April 11

The web authority claimed that some accounts had caused social unrest with ‘fabricated hot topics’ and ‘sensational headlines’ while others were said to have ‘maliciously tampered with the history of the party and the country’.

Certain authors also posed as authorities to mislead the public, slandered and smeared heroes and martyrs, and promoted sexual content, the CAC slammed.

The clampdown was carried out by regional cyberspace authorities, such as the ones in Beijing, Shanghai and Guangdong.

An official statement said that 6,126 articles were ‘cleared’ and 18,576 accounts were suspended or shut.

The government will spend the next two months clamping down on ‘malicious marketing accounts’, according to the statement. 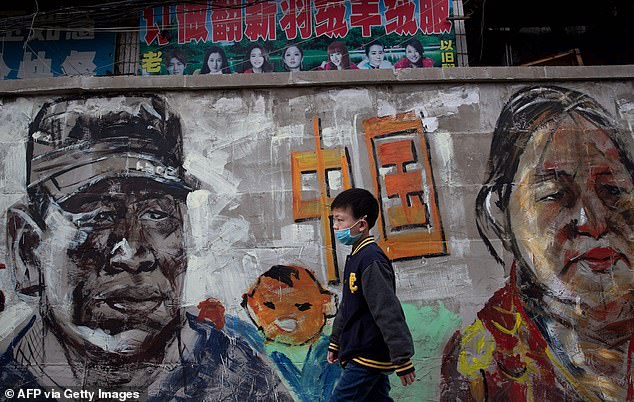 China’s coronavirus outbreak has tested the limits of free speech on its heavily censored internet. Pictured, a boy wearing a face mask walks along a street in Wuhan on April 24

China is home to the largest online community in the world.

As of December, there were around 3.67million apps available in the country and the number of downloads of social and information software programmes amounted to 116billion times that month, according to CAC.

China’s coronavirus outbreak has tested the limits of free speech on the country’s heavily censored online and social media.

A brief window of liberalisation opened during January but was subsequently slammed shut by authorities.

While censorship in China has tightened under President Xi Jinping, questions of transparency around the coronavirus are especially sensitive.

Beijing’s cover-up of the extent of the 2003 SARS epidemic had fuelled suspicion and mistrust and led to official calls for openness this time around. 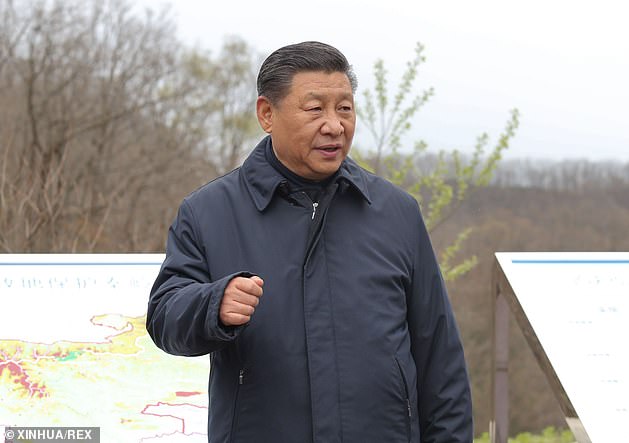 While censorship in China has tightened under President Xi, questions of transparency around the outbreak are especially sensitive. Xi is pictured visiting the province of Shaanxi on April 20

The online buzz about the outbreak flourished, with netizens largely unfettered in criticising local authorities – but not central government leaders – over their handling of the crisis.

Especially, China’s censorship machine was tested when Dr Li Wenliang, a Chinese doctor who had been reprimanded for issuing an early warning about coronavirus, died of the disease on February 7, triggering widespread outrage as well as mourning.

Online media outlets were permitted to report on Dr Li’s death, but not the anger it had engendered, and early discussions on social media calling for the Wuhan government to apologise to him later disappeared. 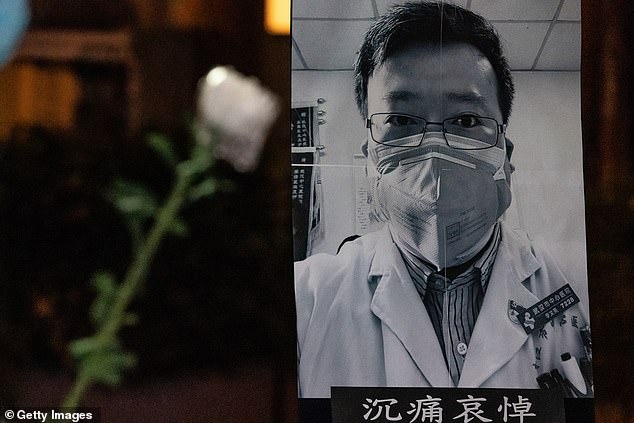 The death of Dr Li Wenliang, who had tried to warn the public about a ‘SARS-like’ virus, caused an uproar among the Chinese citizens, who accused the government of silencing the medic

Chen Qiushi, a citizen journalist who was sending dispatches from Wuhan over Twitter – which is blocked in China – including images of corpses in the city’s hospitals, has been forcibly put under quarantine since February 7, according to his family and a friend managing his account in his absence.

Many Chinese Internet users have turned to black humour or shared images, songs and other art forms in private WeChat groups to express their dismay. One phrase widely shared mocked how many Internet pages and content were now showing ‘server not found’ or ‘404’.

The coronavirus pandemic emerged in the central Chinese city of Wuhan in December.

COVID-19, the diseased caused by the virus, has killed at least 4,632 people and infected more than 82,804 inside China, according to the latest figures from the Chinese National Commission.

Worldwide, more than 190,000 people have died and over 2.7 million have contracted the contagion in the health crisis.

A Chinese journalist who went missing for nearly two months after streaming videos from Wuhan has re-appeared.

Li Zehua was one of three citizen journalists reporting from Wuhan’s frontlines during its coronavirus epidemic who mysteriously disappeared.

He claimed he had been detained and forcibly quarantined by police in a video released on Wednesday.

A former employee of state broadcaster CCTV, the 25-year-old was last seen on February 26 in a video he posted online. 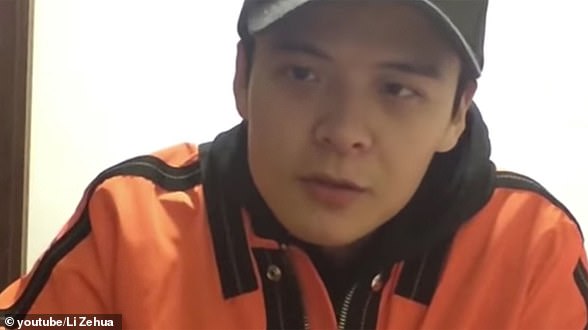 Li Zehua (pictured) has emerged in a video online after he was last heard of on February 26. He said he had been forced into quarantine by local police for visiting ‘sensitive epidemic areas’

The hours-long live-stream ended when agents entered his apartment – and he hadn’t been seen since.

Li said on 26 February, a white SUV pulled out in front of him while he was driving in the Wuchang district in Wuhan and shouted at him to stop.

Panicking, he drove off with the car in pursuit and was able to reach his apartment. He recorded the video and posted it online later that day.

After making it back to his apartment he said he turned the lights off and sat for hours in front of his computer for hours waiting.

A knock came three hours later and three men who identified themselves as public security entered. They took Li to a police station where he was interrogated for 24 hours. He claims he was told he was being investigated on charges of disrupting public order.

Police later decided not to charge him but said he would need to be quarantined because he had visited ‘sensitive epidemic areas’.

According to him, he spent the next month in quarantine in Wuhan before he was released on March 28 and has since been spending time in his hometown in a different province.

He was keen to stress that officers treated him politely while in quarantine and he was served three meals a day, monitored by security guards and able to watch the state broadcaster CCTV’s evening newscast.

The video was uploaded to his YouTube account on Wednesday and was said to be filmed on April 16.

Before he was taken by police, he had visited a series of sensitive venues in Wuhan, such as the community that held a huge banquet despite the epidemic and the crematorium which was hiring extra staff to help carry corpses, according to Radio Free Asia (RFA). 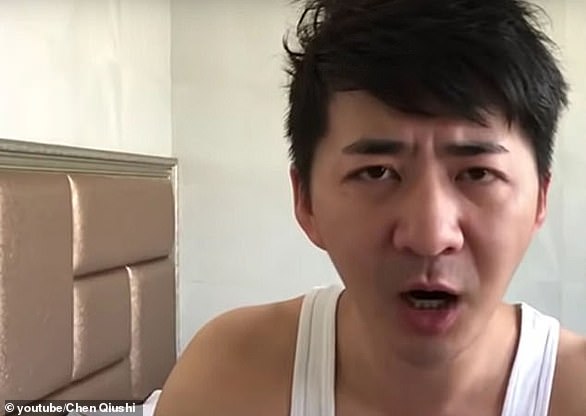 Chen, 34, who went to Wuhan to report about the coronavirus outbreak independently, has not been heard from since 7pm local time on February 6, according to posts on his Twitter account 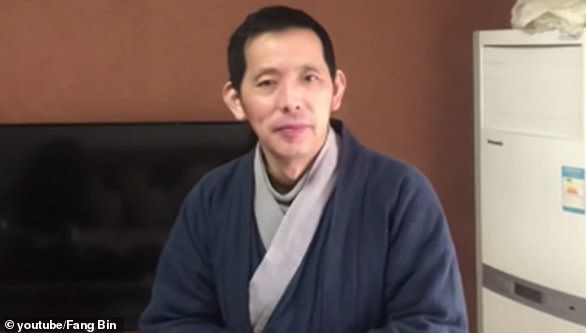 Fang Bin (pictured), a Wuhan resident, went missing on February 9 after releasing a series of videos, including one showing piles of bodies being loaded into a bus (below)

At the time of his disappearance the outlet said Li was likely targeted by secret police after visiting the £34million Wuhan Institute of Virology.

It has been at the centre of conspiracy theories, which suggest the killer virus originated there.

Two other whistle-blowers who tried to inform the world about the true scale of the coronavirus outbreak in Wuhan are still missing.

The whereabouts of Chen Qiushi and Fang Bing have been unknown since February, and Chinese officials have not publicly commented on them.

The citizen journalists had sought to expose the true scale of the outbreak from the then epicentre by uploading videos to YouTube and Twitter, both banned in mainland China.