On a quiet street corner in a neighbourhood in Beijing known for families and retirees, Xue Min, 22 a recent graduate, swats her legs, fighting off mosquitoes, as she encourages passersby to browse the earrings and scrunchies she has laid out on a cloth, surrounded by fairy lights. “Have a look,” she says brightly to a couple that pause briefly before moving on.

Just before 10pm, two men arrive with a food cart – a gas stove, wok, and counter, attached to a motorbike and begin to prep their menu of fried rice and noodles. Xue and her neighbour, a woman selling books, toothbrushes and trinkets from abroad, murmur and watch with expectation. Business might pick up a little now.

Soon, more people begin to stop. Two young men, carrying a bag of cans of beer, browse the books. One picks up a translation of Pride and Prejudice before opting for a collection of stories by Arthur Conan Doyle. The other buys a journal. Meng, 35, one of the food stall owners, calls to delivery drivers as they stop their electric bikes by the curb: “Hey big brother, what will it be?”

It is a scene that should belong to another time, when Beijing’s sidewalks were often crowded with hawkers selling local street food and a surprisingly diverse selection of daily necessities – socks, flatware, DVDs, text books, lingerie and pets. Street vendors have come to be viewed as backwards and poor, pushed out by many city authorities in an effort to modernise the country’s urban centres. 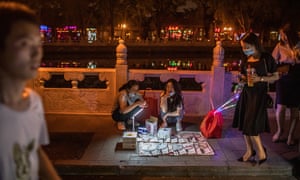 But now, according to a recent speech by Chinese premier Li Keqiang, the street hawkers are the “lifeblood” of the country and a key source of employment in the aftermath of the Covid-19 outbreak. Li’s remarks during a visit to Shandong province last week has created a frenzy around the idea of the ditan, “street vendor” economy.

Stocks in companies selling vendor equipment have surged. Major Chinese tech companies began offering cheap loans to new stall owners. On the search engine Baidu queries for “street vendor tips” jumped in the days after Li’s speech, according to the company. In May, officials said a ranking of “civilised cities” would no longer penalise for the presence of street stalls. At least 27 cities have pledged to support the once undesirable micro-economy.

Soon after Li’s speech both Meng, whose wages at his day job at a restaurant have been cut, and Xue who holds out little hope of finding a job soon, turned to street vending.

“I am looking for a job while also running a stall,” said Xue, who studied human resources. She has only been out for the last three days and the profits have so far not been great. “We have come out because the policy is relaxing, and there is nothing else to do,” she says.

Meng, who has to earn enough to send back home to Guangdong province in the south to support two sets of parents, his wife and two young children, teamed up with a coworker to buy equipment for their food stall – about 5,000 yuan ($US70), or two months of their wages at the restaurant. On a good night, they can sell about 100 portions at 10 yuan each ($1.40).

He spends his lunch hour prepping food so that he can go directly from work to setting up his food stall, and doesn’t go home until about 3am. “I’m lucky if I get three or four hours of sleep. But there’s no other way,” he says.

China’s street vendors were once seen as a symbol of the country’s burgeoning market economy in the 1980s and have been promoted at different times to deal with unemployment – such as in the 1990s during mass layoffs as state-owned companies were privatised. Experts say they play a key role in cities, providing employment for the lower-skilled population as well as a source for cheap food for poorer residents, many of them migrant workers. 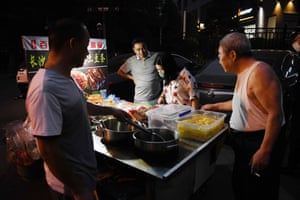 Experts say it is not clear whether government attitudes toward them have changed. “Is vending being embraced in a way that views the street as a place where people, even rural people, should be able to pursue a livelihood? I’m not sure. This is another top-down initiative, not a deliberative response to local expressions of need,” said Amy Hanser, associate professor in the department of sociology at the University of British Columbia, who focuses on inequality and urban China.

In the days since Li’s speech, authorities have started to limit public excitement. A directive from propaganda authorities told news outlets to delete content related to the ditan economy in order to avoid “hyping” the topic. On Weibo, some hashtags related to the subject appeared to be blocked. Authorities in Beijing have already said that the capital is “not suitable” for street vendors.

That skittishness may be because a loosening of policies toward the vendors would be a rare example of social control being relaxed. For most of the last decade, cities like Beijing have come under stricter urban regulation, from barring “uncivilised behaviour” – like the “Beijing bikini” when men roll up their shirts in the summer – to efforts to rid the city of the so-called “low-end population” of migrant workers.

“We see Chinese society under more and more control. Everything becomes stricter, and suddenly we see some space,” said Xu Jianhua, of the department of sociology, at the University of Macau who has researched street vending in Guangzhou. “I don’t think it’s really about so many people excited about vending. It’s an opportunity to see the relaxing of control.”

Xu see the current support of street vendors as a temporary measure in response to Covid, not a real reversal of the government’s apprehension about the informal economy and set ideas about cities.

Blindsided: how coronavirus felled the global economy in 100 days

“The overarching idea about what is modern, what is a good city I don’t think has changed,” he said. “Modern means clean, orderly, skyscraper by big companies, and smarter cities.”

For Meng, the street stall business is also temporary. Beijing has not relaxed its policies toward vendors. As his partner quickly stir fries rice noodles with egg, sauce and vegetables, he takes orders and serves up the food in small styrofoam bowls and a pair of disposable chopsticks.

“Our customers are very happy to see us. Some said they couldn’t find any food even after a long walk. So it’s very convenient,” he said.

But Meng does not plan on doing this forever. Chengguan or municipal management police have reputation for abusing, sometimes beating, street vendors. The fines are also steep. “Running a stall, there is no stability. Even if you are not caught today. You might get caught tomorrow.”