The Chinese government has urged Australia not to interfere in the prosecution of Australian-Chinese man Yang Hengjun, as its takes the next step towards formally charging the former University of Technology, Sydney academic after 14-months of imprisonment.

Lawyers for Dr Yang said on Wednesday that their case had been received by the Prosecutor-General's Office on the last day that formal charges could be transferred under China's opaque judicial system. 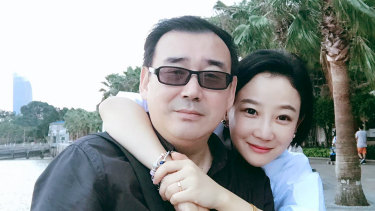 In this 2017 photo provided by his family, Yang Hengjun, left, poses with his family member in Beijing. Credit:Yang family photo via AP

Dr Yang's lawyer, Mo Shaoping, said the office would review the materials and evidence that the security organs have investigated and would make a decision whether to prosecute in the next six weeks.

"If they believe that the facts are unclear and the evidence is insufficient, they have the right to return the case to investigating organs twice for supplementary investigation," he said.

The Australian citizen and pro-democracy political blogger was detained in January last year and formally arrested by the Beijing State Security Bureau on August 23 on suspicion of endangering Chinese national security. His lawyers say the 54-year-old has been held largely in isolation since. The move to formally lay charges was first reported by the ABC on Tuesday night.

Foreign Affairs Minister Marise Payne has repeatedly raised concerns about claims that he has been shackled and subjected to daily interrogations.

The coronavirus that has swept through China and now across the world has further limited already scarce visits to the country's jails and Dr Yang's lawyers fear they may not be able to meet with him in person to prepare his case.

Mr Mo said it was still not clear if Dr Yang would only be facing one charge of espionage.

Dr Yang's lawyers will only be able talk to the media about the procedure of the case but the details will remain confidential under Chinese law as it involves state secrets.

In August, Senator Payne told media she had no information to support the accusation that Dr Yang was spying for Australia or any other country.

"The Chinese relevant authorities are investigating the case in accordance with Chinese law," the spokesman said on Wednesday.

"We urge the Australian side to respect China’s judicial sovereignty and refrain from interfering in the legal process in any form."

"Any outcome will depend on the political consideration of the Chinese government itself," he said.

"There is no evidence whatsoever for them to charge [him] as a spy for Australia or any western government.

"This is motivated by two political decisions. One is to silence political dissent and the second is the broader operation to force western governments to back off from the Huawei case.

Professor Feng alleged Dr Yang was still being used as political leverage to get Australia to allow Huawei to take part in its 5G network.

The Turnbull government banned the Chinese-owned telco from participating in the 5G rollout in 2018 over national security concerns.