Wellington: A 19-year-old Christchurch man has been charged by police in the wake of the circulation of a threatening photo outside Al-Noor mosque.

Sam Brittenden appeared in court on Thursday for failing to assist police with a search warrant.

His arrest followed a raid at a Christchurch property in relation to the photo.

Al-Noor mosque was the site of 42 deaths in last year's terrorist attack, which will be commemorated on March 15 – the first anniversary of the tragedy. 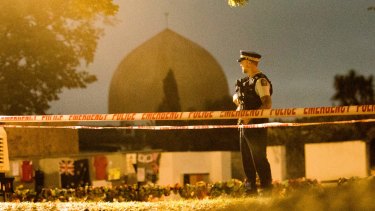 A policeman stands guard at the Al Noor Mosque ahead of a national call to prayer after the shootings.Credit:Jason South

New Zealanders are anxiously anticipating that event, while police are reinforcing security around the mosque and the Linwood Islamic Centre, where another nine deaths occurred.

Prime Minister Jacinda Ardern said she was devastated to learn of the circulation of the offensive photo, which showed a masked man threatening to kill worshippers.

It was shared on a social media network thousands of times.

Brittenden, who lost a request for name suppression, is likely to face further charges according to several reports.

He has been bailed on the condition he does not enter Hagley Park – the site of the March 15 commemorations near the mosque – or possess firearms.

According to news outlet Stuff, the teenager is a member of a white nationalist group, which AAP has chosen not to name.

The group disavowed Brittenden's actions, calling them "immature and unproductive as we do not use violence to reach our goals".

"[The group] does not commit the error of many conservatives who declare Islam to be their absolute enemy," a statement read.

"We will continue on our mission to build a community for young European New Zealanders."

Brittenden's father told Stuff his son had "stuffed up".

"I haven't brought my son up to be like this," Scott Brittenden said.

"I've got to support my son. That's the most important thing to me.

"I know he's stuffed up but I'm not aware of anything because no one has told me all the facts yet."