How Britain celebrated the Queen’s Coronation Day in 1953: New colourised images bring the nation’s jubilant street parties to life as 20million watched on TV to see Her Majesty crowned at Westminster Abbey

To mark the Queen’s Coronation in June 1953, there were thousands of street parties across the country – just as there will be this coming Sunday as Britain celebrates Her Majesty’s Platinum Jubilee.

Britons young and old turned out in their droves to celebrate as the Queen was crowned in an incredible ceremony inside Westminster Abbey that was watched by an estimated 20million people on TV.

Now, heartwarming photos showing the 1953 street parties have been colourised and enhanced to mark the Queen’s 70 years on the throne.

They show families in Buckinghamshire, North Oxfordshire, and Wimbledon and Edmonton in London. They give a small snapshot into the joy of the occasion.

The Britons who featured in the photos have recalled their memories of the street parties.

Jean Flannery, who was aged eight on Coronation Day, shared photos taken in Bletchley, Buckinghamshire, that showed her in a paper crown and dress.

Now aged 77, she recalled how her mother had made costumes for her and her cousin for a fancy dress contest, but she was left ‘miffed’ when her relative won instead of her.

Colin Wills, from Banbury, north Oxfordshire, who was also aged eight, said he was dressed by his mother to look like a ‘Coronation Cracker’ in a costume made from ‘red, white and blue crêpe paper and white ribbon.’ A hilarious group photo shows him with his head and shoulders obscured by his cracker-like costume. 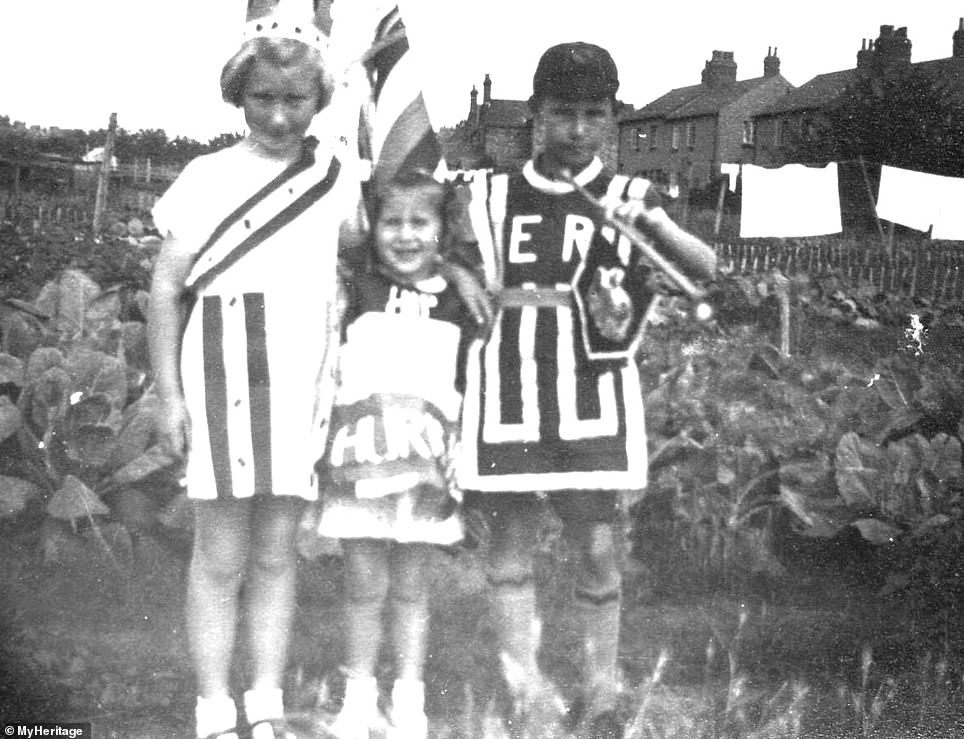 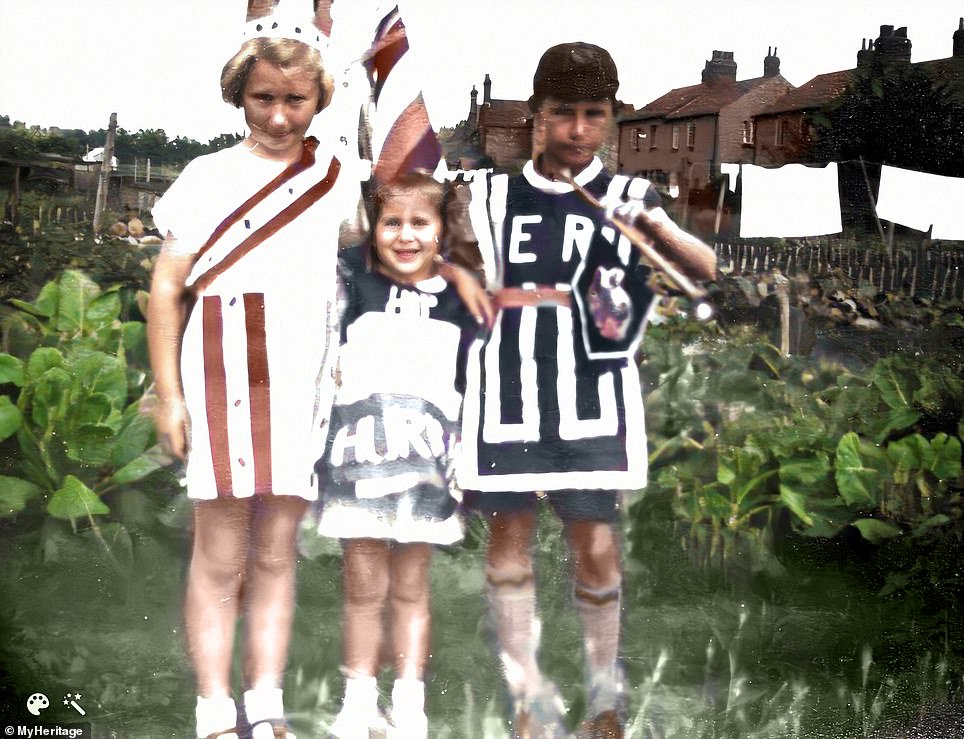 Heartwarming photos showing the 1953 street parties to mark the Queen’s Coronation have been colourised and enhanced to mark Her Majesty’s 70 years on the throne. Above: Jean Flannery (left), then aged eight, with her sister Carole, 4, and cousin Ken, 9, in Bletchley, Buckinghamshire. The trio were taking part in a fancy dress competition, with the costumes made by Ms Flannery’s mother 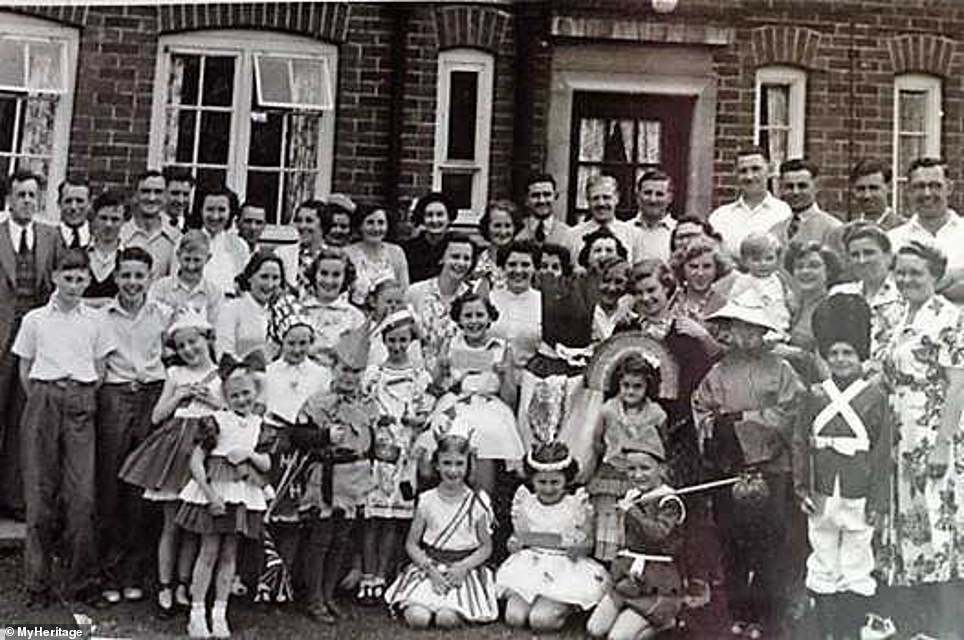 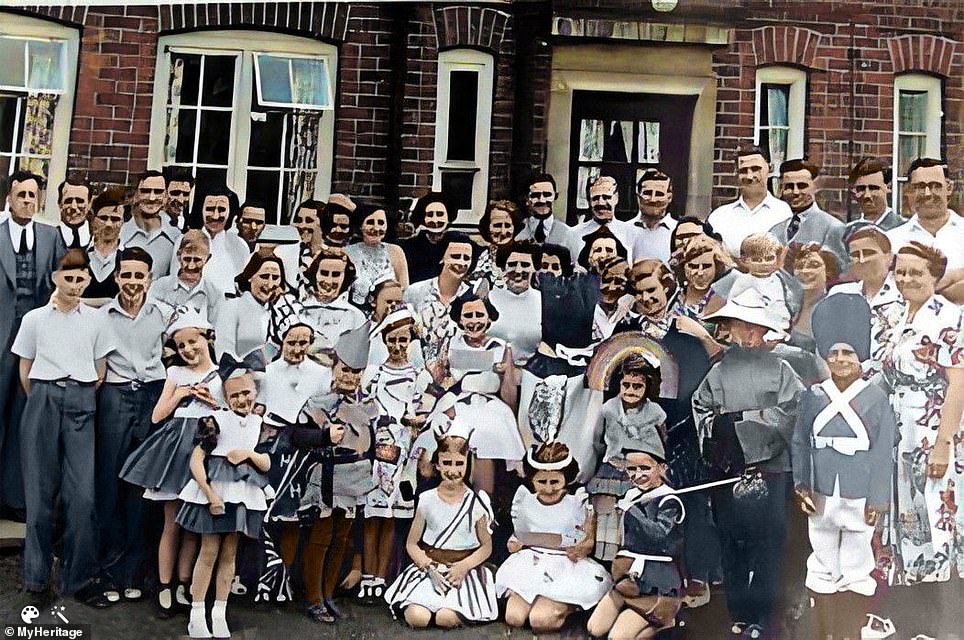 Colin Wills, from Banbury, north Oxfordshire, who was also aged eight, said he was dressed by his mother to look like a ‘Coronation Cracker’ in a costume made from ‘red, white and blue crêpe paper and white ribbon.’ A hilarious group photo shows him with his head and shoulders obscured by his cracker-like costume. Above: Mr Wills is seen in the centre right of the image with the cracker on his head

Ms Flannery said: ‘My mother made the costumes for the fancy dress contest, largely from crêpe paper. My costume was red, white and blue, with a Coronation crown.

‘My four-year-old sister Carole’s costume was ‘Hip, Hip, Hurray!’ and my 9-year-old cousin Ken was a ‘Royal Herald.’ I felt very miffed that Ken went on to actually win the competition in an outfit made by my mother.’

The photos of her were taken in her family’s back garden, with her cabbages grown by her father and neighbours’ washing as the backdrop.

She said they ‘shivered’ in their costumed because it was ‘very cold’ for June and also rained. But she added: ‘It was a very special day for us all to remember.’

As well as her family’s celebrations, there were also town-wide parties to mark the Coronation.

‘We went to a children’s party in one of the local church halls. There was a celebratory tea for us with sandwiches, jelly and cake,’ Ms Flannery said. 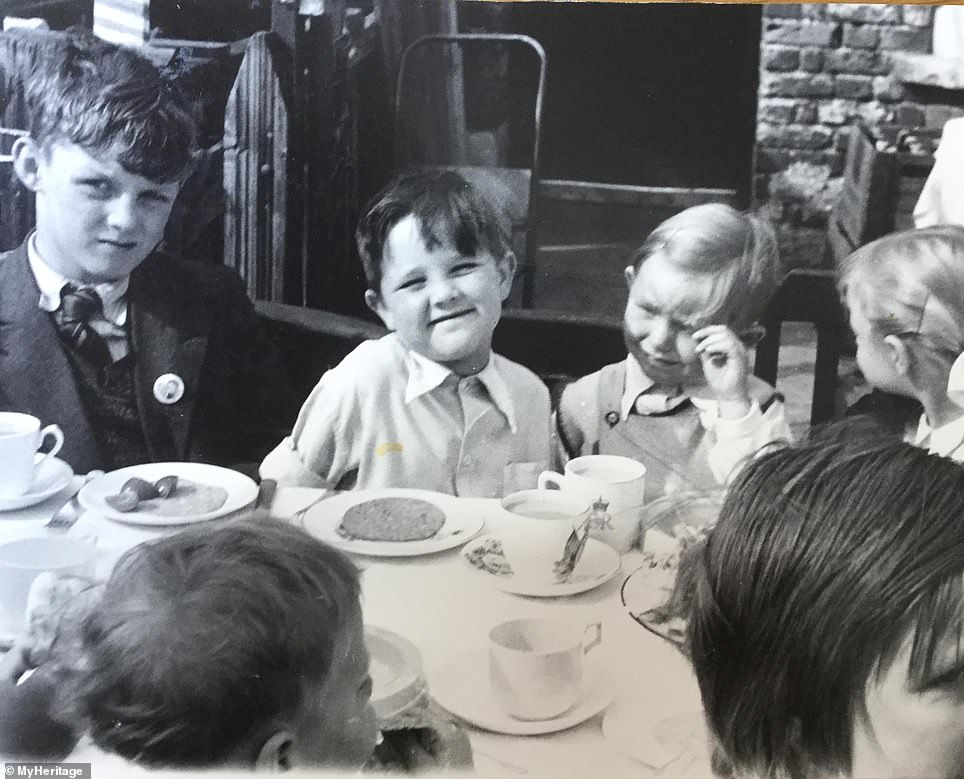 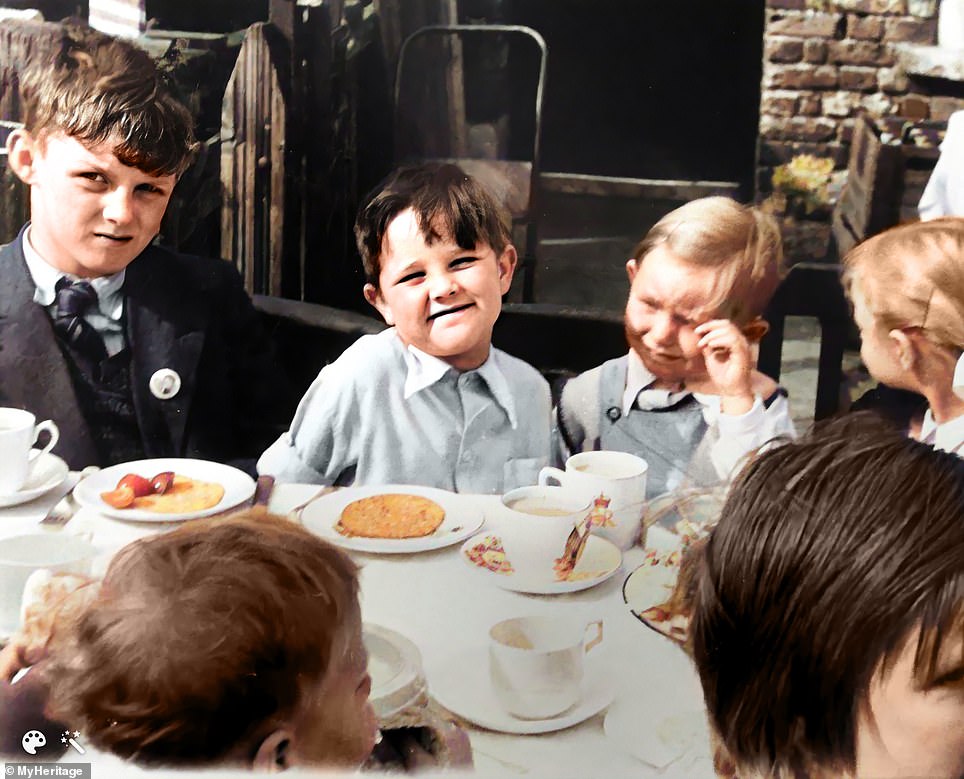 Paula Glazebrook with family on Coronation Day, in St. Mary’s Road, Edmonton, North London. She is seen with her brothers Alan, David and Bernard Skeggs. In front of the family are cups of tea in mugs emblazoned with the Queen’s royal cipher 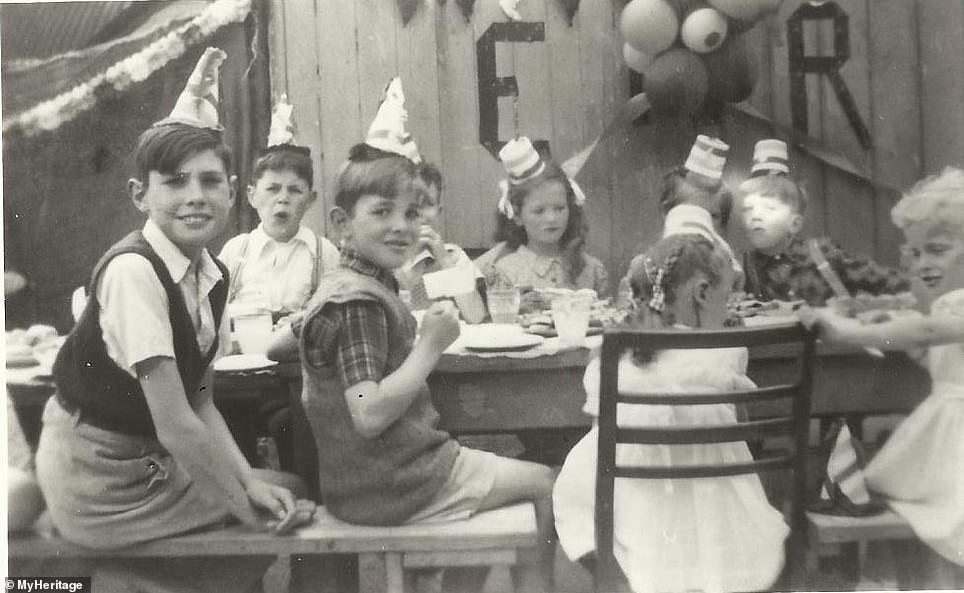 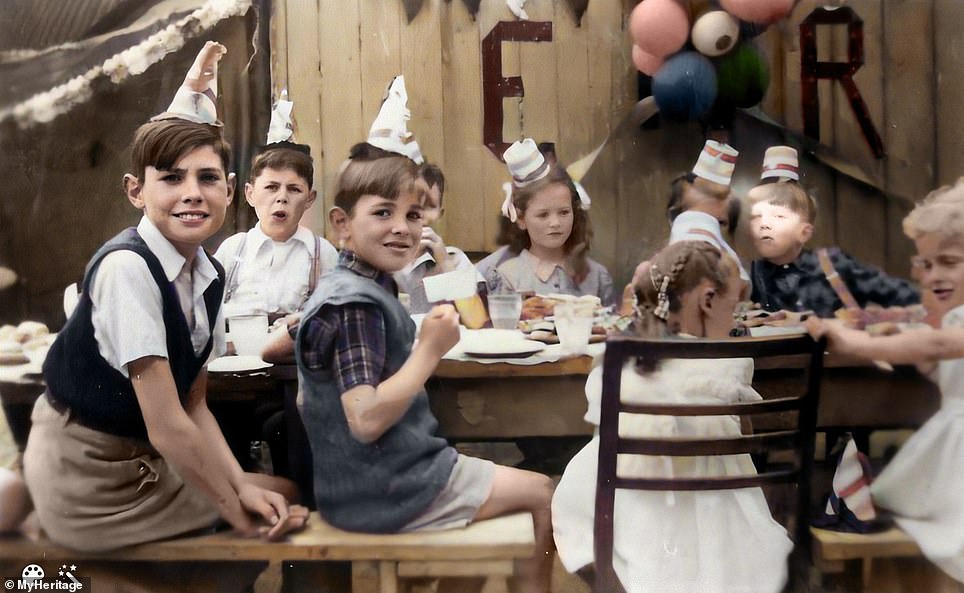 Melvyn Bull (left), then aged 10, is seen sitting next to his brother Rodney, aged six, along with other children during a Coronation Day party at Adelaide Place, Fareham, Hampshire

‘All the children were given souvenir Coronation mugs and plates. Flags and bunting were to be seen everywhere.’

Mr Wills, who is now aged 77, said: ‘Back in 1953, there were no shops where you could buy or hire a costume, so everything had to be handmade.

‘My Mother in her wisdom decided to dress me up as a Coronation Cracker made with red, white and blue crêpe paper and white ribbon.

‘A novel idea in keeping with the occasion, but not very practical if you want to see it in front of you, very fragile and has a tendency to tear.

‘Sadly I didn’t win the competition but did manage to keep my costume intact for this photo. There was a good spread for us kids to get stuck into like Spam sandwiches, fancy cakes and lemonade.

‘The adults no doubt swilled the food down with Banbury Ale. Such a contrast to a few years before when everything was on ration.’

Whilst rationing – imposed during the Second World War – had not come to a complete end by the time of the Coronation, restrictions on sweets, chocolate, eggs and cream were lifted beforehand, although sugar was still limited. 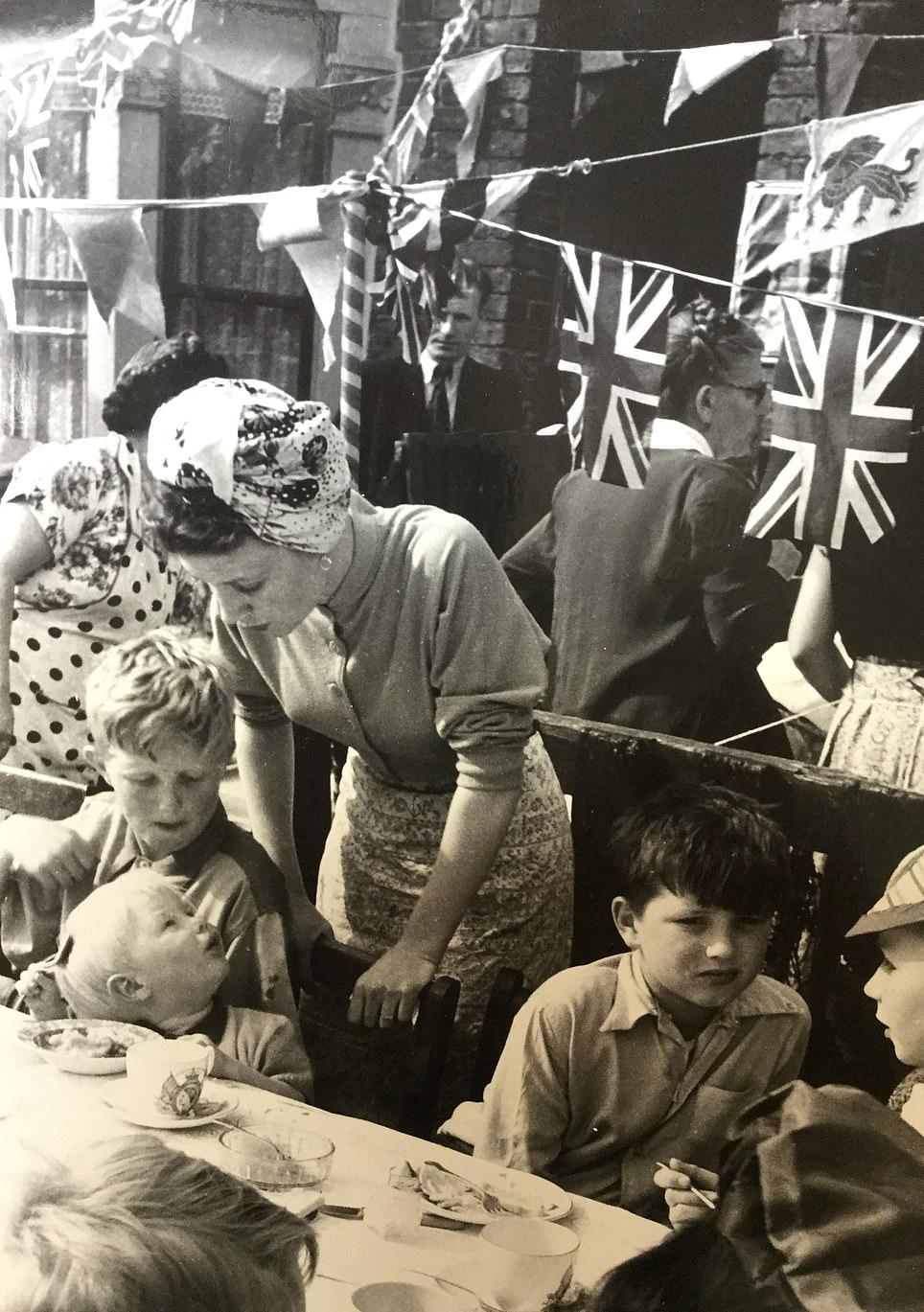 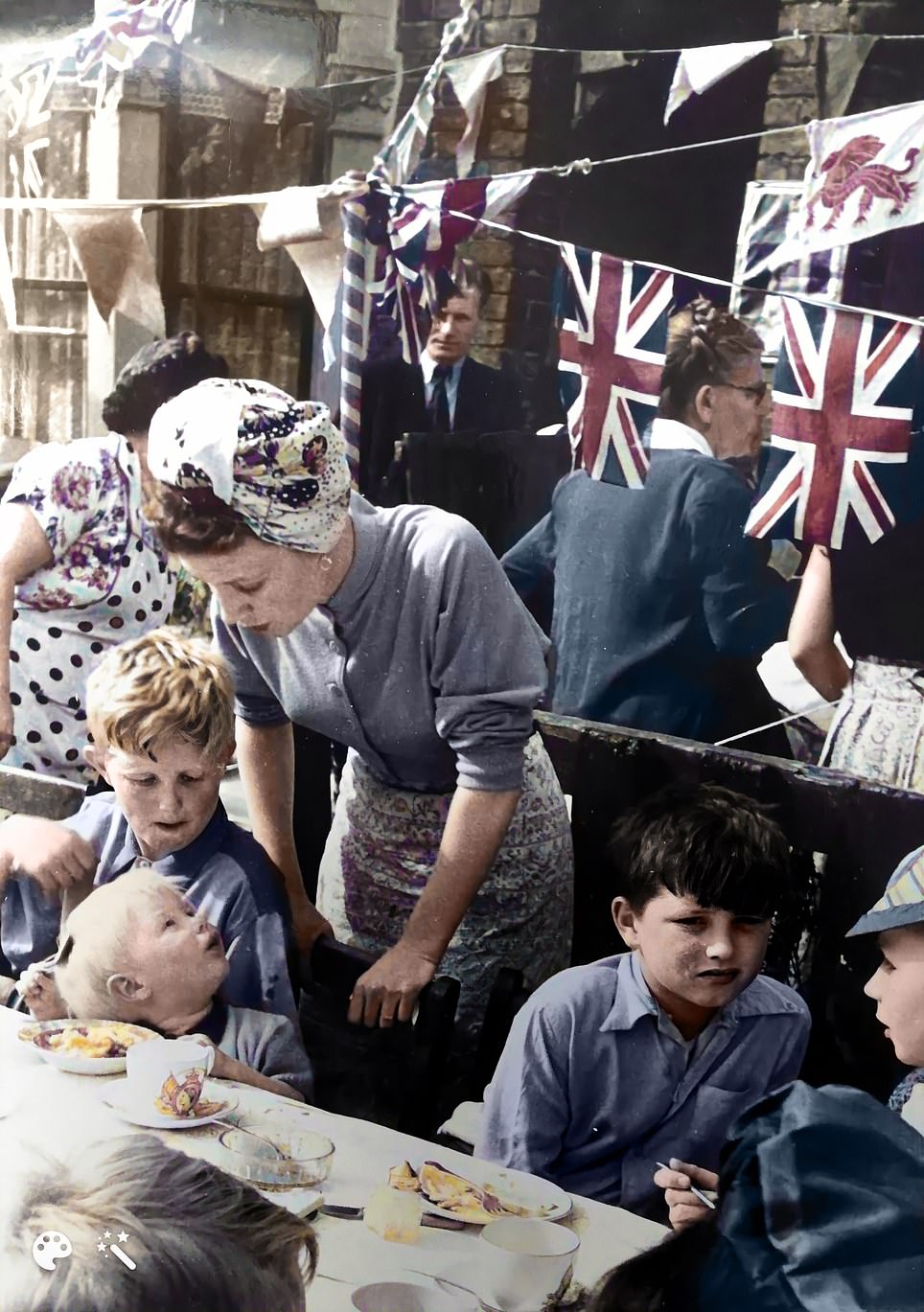 Residents from Ms Glazebrook’s’ street in Edmunton, north London, are seen again during the jubilant celebrations held to mark the Queen’s Coronation 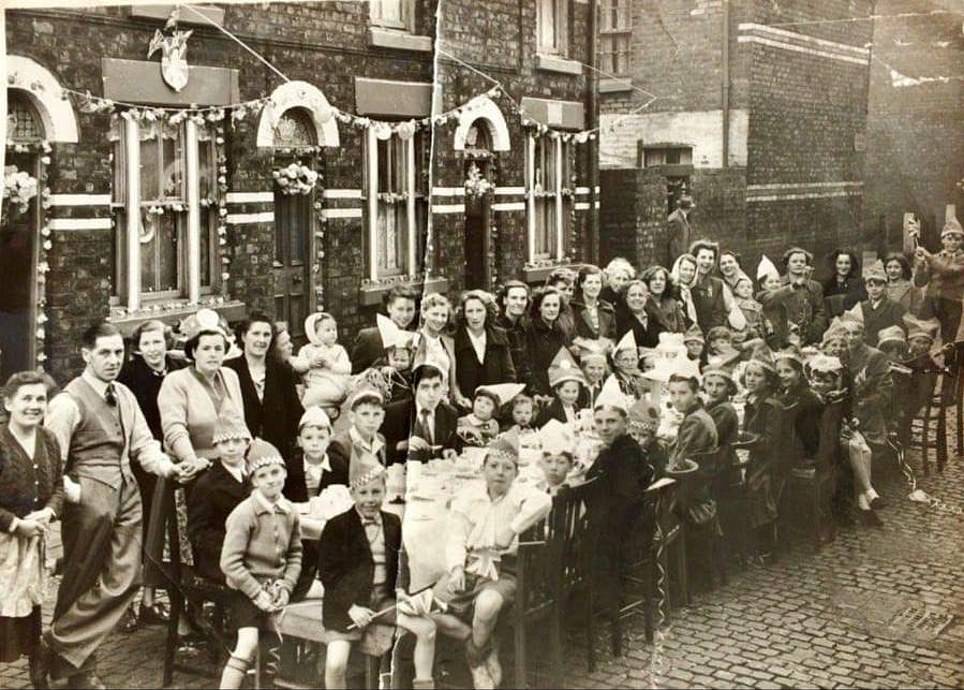 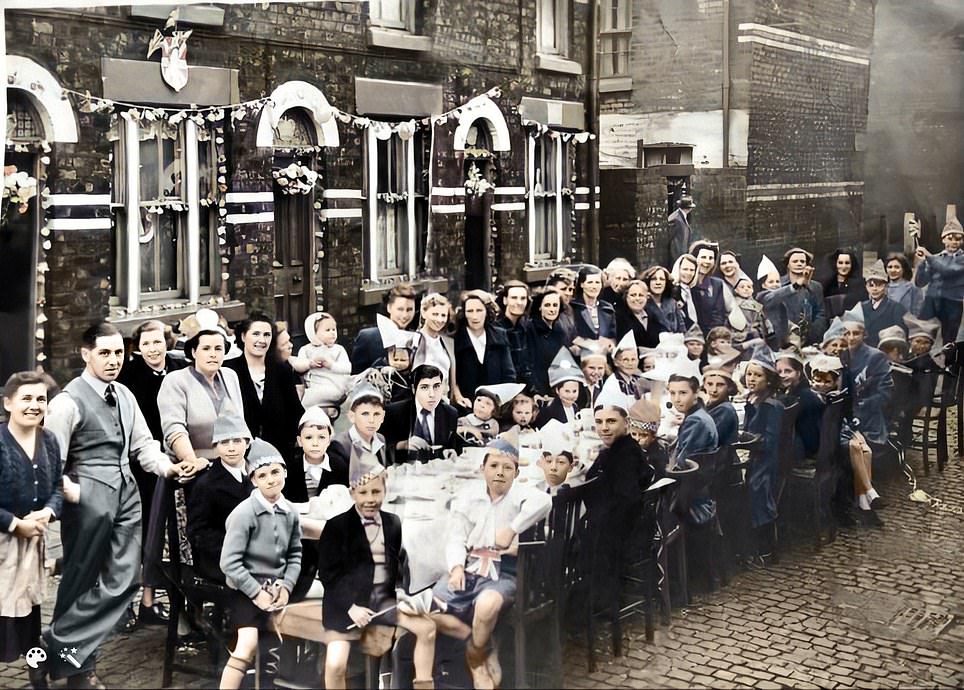 Another colourised image, sent by Pamela Smith, who is now aged 75, shows the party on her street in Liverpool in 1953. Mothers and fathers are seen lined up in a row as most of the children sit at the giant table. Ms Smith, then aged six, is seen sitting eighth from left on the back row of the table, wearing the triangular hat. Sitting to her right was her sister Patty, who was nearly two. Her brother Charles, then 13, is seen wearing a shirt and tie third from right of Ms Smith 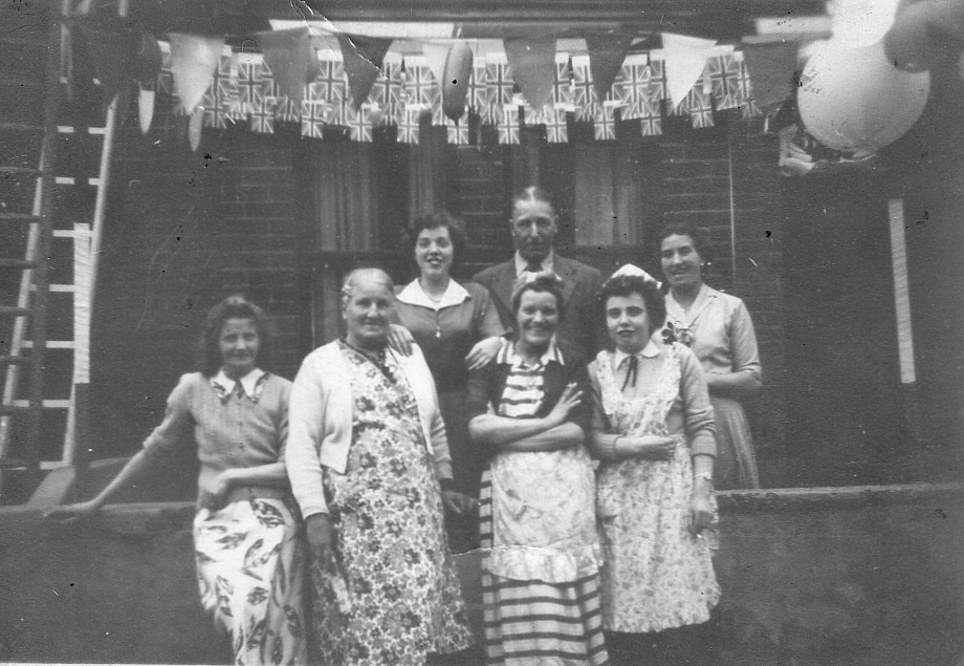 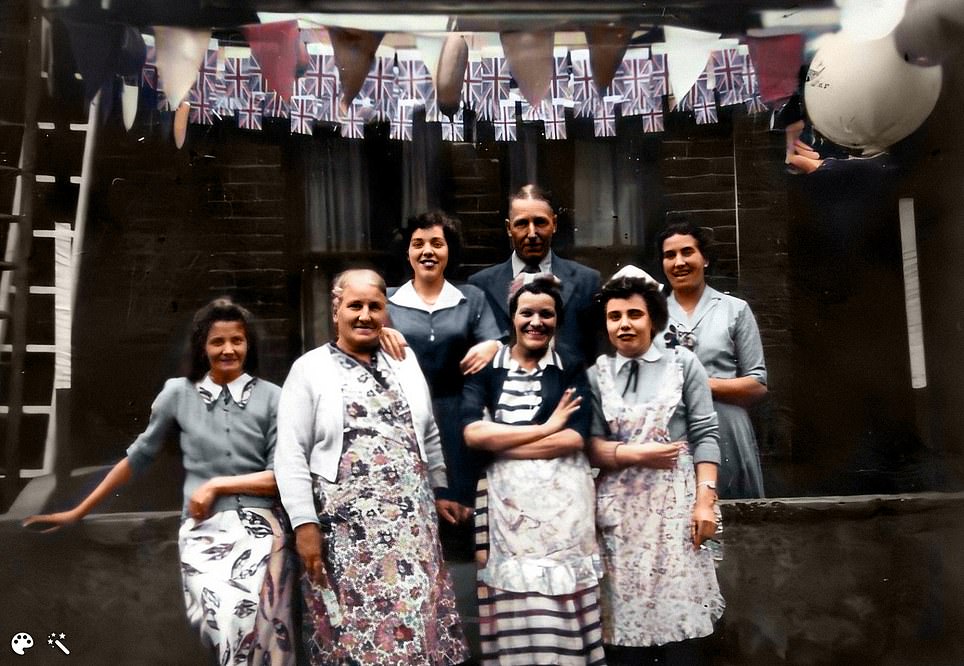 A photo sent in by Colin Evans shows a family celebrating Coronation Day in South Wimbledon. Seen above them are rows of bunting

Mr Wills recalled how the street party he was involved in had been organised by residents who had moved into their council houses in 1947, just two years after the end of the Second World War.

The party took place on a concrete driveway that had been built along with four houses for local policemen.

One of the officers, a Sergeant Howkins, is shown in the images standing next to the home he lived in.

Mr Wills added: ‘Every building in the land was decked out in the patriotic colors of red, white and blue bunting and Union Jack Flags in anticipation of the big day.’

Pamela Smith, 75, from Liverpool, is pictured with her brother and sister sitting at an enormous table during a party on their street.

She said: ‘The preparations for Coronation Day’s street party had been ongoing for months by our community.

‘I was five when the Queen’s father died, and I remember that when the radio broadcasted the notification of his death, my initial reaction was strong, “the king is dead”.

‘It was a very somber news broadcast, and I instinctively knew that it was a historic moment. The coloured and enhanced photograph is outstanding, the colours certainly make you feel like time has stood still.’

Roi Mandel, Director of Research at MyHeritage.com, said: ‘These colourised photographs offer an extraordinary peek into a great moment in history.

‘Black and white images don’t quite do justice to Coronation Day as it is remembered by those who were there: bursting with colour.

‘Every building in the country was decked out in red, white, and blue; the Union Jack flew from every window and rooftop; public spaces were covered in splendid decorations, and the processions were adorned in magnificent costumes.

‘Using MyHeritage technology to breathe new life into these photos seems to make them more true to the spirit of the day, and to the memories of those who experienced it.

‘The best part is that anyone can use this technology to instantly bring old family photos to life and celebrate the past in full, vivid colour.’