Almost two million Britons have submitted benefits claims since the middle of March as coronavirus disruption wreaks havoc with families across the UK.

Some 1.8 million claims for Universal Credit were made to the Department for Work and Pensions between March 16 and the end of April.

That figure represents six times the volume of claims which the department would ordinarily expect to receive in such a timeframe.

In one week there was a tenfold increase in claims but the daily rate is now thought to have stabilised at between 20-25,000 – still double that of a standard week before coronavirus.

That means more than six million workers – approximately one fifth of the UK’s workforce – have now been furloughed with the government paying up to 80 per cent of their wages, up to £2,500 a month. 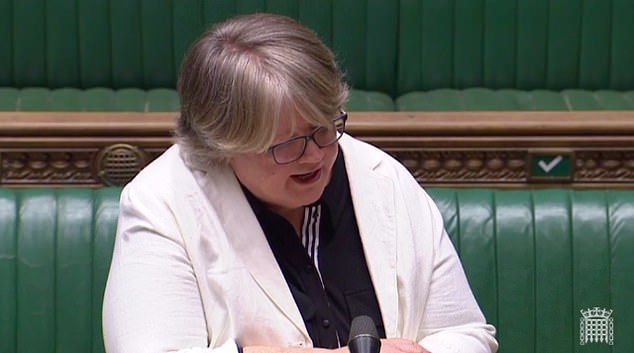 Therese Coffey, the Work and Pensions Secretary, told MPs 1.8 million Universal Credit claims were made between March 16 and the end of April

The current outbreak and the subsequent lockdown which was imposed on March 23 have caused massive disruption to the jobs market with some struggling firms making workers redundant while others have opted for the furlough route.

The scale of disruption was revealed by Ms Coffey this afternoon as she answered questions in the House of Commons.

She said: ‘Since 16 March to the end of April we have received over 1.8 million claims to Universal Credit, over 250,000 claims for Jobseeker’s Allowance and over 20,000 claims for Employment Support Allowance.

‘Overall, this is six times the volume that we would typically experience and in one week we had a tenfold increase.

‘The rate for UC claims appears to have stabilised at about 20-25,000 per day, which is double that of a standard week pre-Covid-19.’

Ms Coffey added: ‘We’ve also issued almost 700,000 advances to claimants who felt that they could not wait for their routine payment and the vast majority of these claimants received money within 72 hours.’

The government has been urging firms to furlough workers rather than make them redundant in order to maintain a link between employers and employees.

That way when the lockdown ends the hope is many companies will be able to get back up to speed quickly.

The furlough scheme sees the government pay 80 per cent of a worker’s wages, up to a monthly cap of £2,500.

Any furloughed worker is not allowed to work for their firm due to the fact they are effectively being paid by the state.

The Prime Minister’s Official Spokesman said at lunchtime that the total number of firms applying to the scheme now stood at just shy of one million.

It means taxpayers are picking up the bill for the wages of more than six million workers at a cost of £8 billion.

The spokesman said: ‘Since the launch, 800,000 employers have used the job retention scheme to furlough 6.3 million jobs. That’s to a total value of £8 billion.’