Boris Johnson’s coronavirus strategy could FAIL and leave the NHS on the brink unless half of Britons obey ‘social distancing’, government’s own experts warn as they say shutting pubs and restaurants WOULD ease the spread

Boris Johnson’s coronavirus plan could fail and leave the NHS on the brink unless at least half the public obey self-isolation and ‘social distancing’ rules, the government’s own experts have warned.

A swathe of newly-released evidence presented to ministers suggests that the fate of the PM’s plan rests on convincing enough people to fall into line.

One paper from the Scientific Advisory Group for Emergencies (SAGE) dated March 9 says it might be ‘unachievable’ to get 50 per cent of the population to follow measures – including urging everyone to avoid all non-essential social contact and households isolating when one person has symptoms.

It cautions that if the level falls far below that there could be limited effect in protecting the NHS from being overwhelmed.

The documents will increase the pressure on the PM to force bars and pubs to close, saying they are ‘higher risk’ that public events, most of which have already been cancelled.

The experts also cast significant doubt on Mr Johnson’s claim that the ‘tide can be turned’ in the crisis within 12 weeks, saying restrictions will be needed for ‘at least most of a year’. 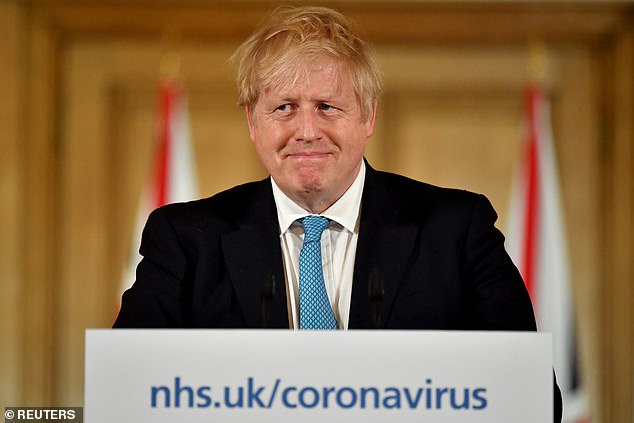 The documents will increase the pressure on the PM (pictured in Downing Street last night) to force bars and pubs to close, saying they are ‘higher risk’ than public events, most of which have already been cancelled 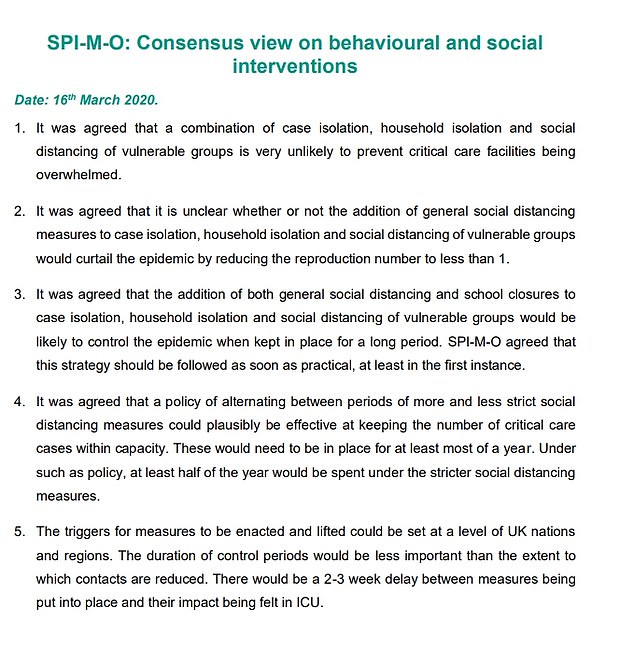 The experts also cast significant doubt on Mr Johnson’s claim that the ‘tide can be turned’ in the crisis within 12 weeks, saying restrictions will be needed for ‘at least most of a year’

It suggests that Britain will be split into different zones, with ‘hotspots’ such as London and the Midlands facing tougher measures.

Controls could also be eased and tightened depending on the speed of spread, as ministers try to avoid a flurry of cases breaking capacity in the health service.

These would need to be in place for at least most of a year. Under such as policy, at least half of the year would be spent under the stricter social distancing measures.

Addressing the prospects of success of measures on March 9, one SAGE paper said:  ‘These interventions assume compliance levels of 50 per cent or more over long periods of time.

‘This may be unachievable in the UK population and uptake of these measures is likely to vary across groups, possibly leading to variation in outbreak intensities across different communities.

‘A reduction in compliance of 20 per cent in home isolation and whole household isolation measures, when combined with social distancing for vulnerable groups would only lead to a modest reduction in the effect (around 5 per cent in the peak bed demand and total deaths).’

Boris Johnson’s own scientific experts have contradicted his claim that they can ‘turn the tide’ on coronavirus within 12 weeks.

The PM made the claim during a press conference in Downing Street last night as he tried to encourage the public to follow ‘social distancing’ rules.

But a SAGE paper warned that in fact such measures would ‘need to be in place for at least most of a year’.

The lockdown could also be varied across different parts of the UK, with ‘hotspots’ such as London and the Midlands facing tougher curbs than other areas with less infection.

The report by the Scientific Pandemic Influenza Group on Modelling states: ‘It was agreed that the addition of both general social distancing and school closures to case isolation, household isolation and social distancing of vulnerable groups would be likely to control the epidemic when kept in place for a long period.

‘It was agreed that a policy of alternating between periods of more and less strict social distancing measures could plausibly be effective at keeping the number of critical care cases within capacity.

‘These would need to be in place for at least most of a year. Under such as policy, at least half of the year would be spent under the stricter social distancing measures.’

Three days later, the PM told the nation: ‘I think, looking at it all, that we can turn the tide within the next 12 weeks and I’m absolutely confident that we can send coronavirus packing in this country.’

A paper from SAGE dated March 4 gave a damning assessment of the benefits of a school shutdown – warning that it could backfire with house parties and gangs of children in parks.

It said the ‘consensus view’ of the group was that closures ‘will be highly disruptive and likely to present an unequal burden to different sections of society’.

There was a risk of ‘unexpected displacement activity’ emerging, such as ‘house parties, congregation of children in parks, and queues at takeaways’.

However, despite the strong view, the measure was introduced by the government barely a fortnight later.

The paper said: ‘Our understanding of reports from Japan is that there is growing discontent around the policy. Isolation of entire households also poses a substantial, and unequal, burden on those affected.

‘Given this, the combination of interventions most likely to be socially acceptable involves isolation of symptomatic cases and isolation of at-risk members of the public…

‘Following this, social distancing and prevention of public gathering measures are the next ‘easiest’ to add to the mix.’

The report continued: ‘If all policies are applied, then the closure of schools, the loss of usual outlets for social interactions, and the absence of grandparents and entire families as a result of isolation might lead to unexpected displacement of activity.

‘For example, house parties, congregation of children in parks, and queues at takeaways. Consideration will be needed as to how to manage these situations without causing confrontation.’

Britain is unlikely to see ‘large scale riots’ during the coronavirus crisis, but crime could rise, experts warned.

The SAGE assessment on behaviour says it expects ‘acts of altruism will predominate’, and they should be promoted by ministers.

However, wide-scale police absences could convince some elements of society that the authorities had been ‘disempowered’ and lead to a rise in ‘opportunistic crime’

There was also concern that the risk of disorder and disobedience could rise if the government response is not seen as ‘competent’.

One paper on social behaviour from earlier this month discussed whether publi gatherings should be banned, and said: ‘Acting in a way that does not meet expectations poses a risk that a section of the public will view Government actions as incompetent or not in the public’s best interests.

‘It may also be taken as signifying that the situation is not expected to be severe for the UK. This could have knock-on implications for public attitudes to other recommendations made by Government.’

Another document said major public disorder ‘is rarely seen in these circumstances’.

‘Acts of altruism will predominate, and HMG could readily promote and guide these,’ the experts said.

‘Where public disorder occurs, it is usually triggered by perceptions about the Government’s response, rather than the nature of the epidemic per se.

‘For example, a perception that the Government response strategies are not effective in looking after the public may lead to an increase in tensions.’ 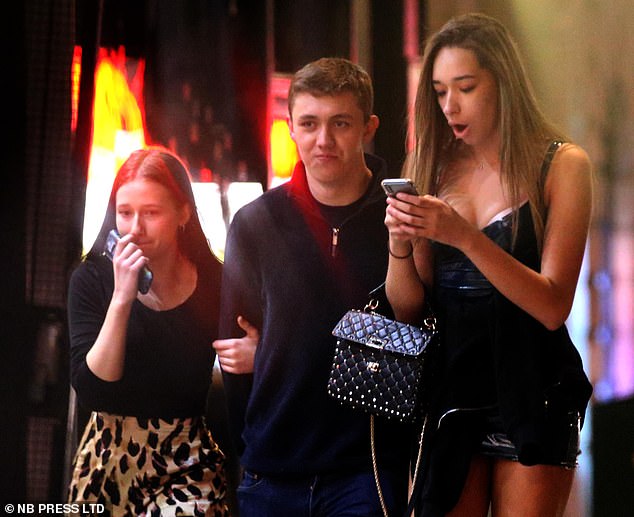