No independent confirmation was immediately available. 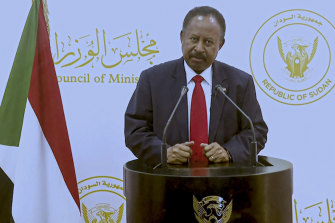 Pro-military protesters briefly blocked major roads and bridges in the capital Khartoum on Sunday, amid growing tensions between the generals and the pro-democracy movement that fuelled the uprising that lead to the toppling of former president Omar al-Bashir.

The protest came a day after US Special Envoy for the Horn of Africa Jeffrey Feltman met with military and civilian leaders in Khartoum to find a compromise to the dispute.

The souring ties between the military and civilians in the ruling government threaten Sudan’s fragile transition to democracy since the military’s ouster of Bashir and his Islamist government in April 2019 after nearly three decades of autocratic rule. 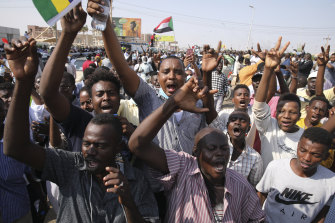 Sudanese demonstrators take to the streets of the capital Khartoum last week to demand the government transition to civilian rule.Credit:AP

The current crisis surfaced with a coup attempt last month. Officials blamed Bashir loyalists for the move. But the generals lashed out at the civilian elements of the government, accusing politicians of seeking government posts rather than helping ease people’s economic suffering.

General Abdel-Fattah Burhan, the head of the ruling Sovereign Council, said last week that dissolving the Hamdok government could resolve the ongoing political crisis. That suggestion was rejected by hundreds of thousands of pro-democracy protesters who took to the streets of Khartoum and elsewhere in the country on Thursday.