The truth about coronavirus: Couple who were struck down with the virus on the Diamond Princess cruise reveal how horror condition affected them VERY differently

A husband and wife struck down with coronavirus after holidaying on the Diamond Princess cruise have spoken about how differently the deadly illness affected them.

Karen and Jason Honey, from Melbourne, were quarantined on board the ship docked at Yokohama, Japan, after an outbreak of the virus was confirmed on February 1.

In a video from their windowless cabin, Mrs Honey said: ‘We’re okay, we’re obviously stuck on this cruise ship but we’ve got to go along with it and do the best we can.’ 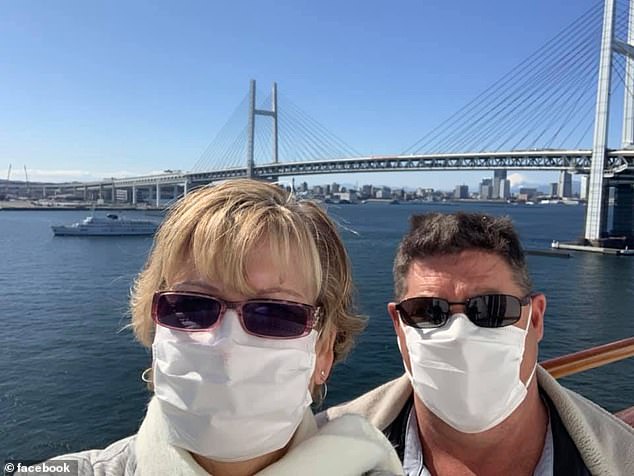 Karen and Jason Honey, from Melbourne, were quarantined on board the Diamond Princess cruise ship docked at Yokohama, Japan after an outbreak of the virus was publicly confirmed on February 1

But on February 11, Mrs Honey was taken off the ship and a swab test confirmed she had contracted COVID-19, ABC’s 7.30 reported.

‘That blew us both away. I thought I was clear,’ she said.

Mrs Honey, who was initially feeling fine, was taken to a hospital in Isesaki while her husband remained on the ship.

While in hospital, Mrs Honey experienced bouts of fever and sweating throughout the night, leaving her clothes and sheets soaked.

On February 20, Mr Honey also tested positive despite showing no symptoms of infection.

‘I feel fine. I’ve had no fevers, no coughs, no nasal problems, no aches, no pains. Nothing.’ 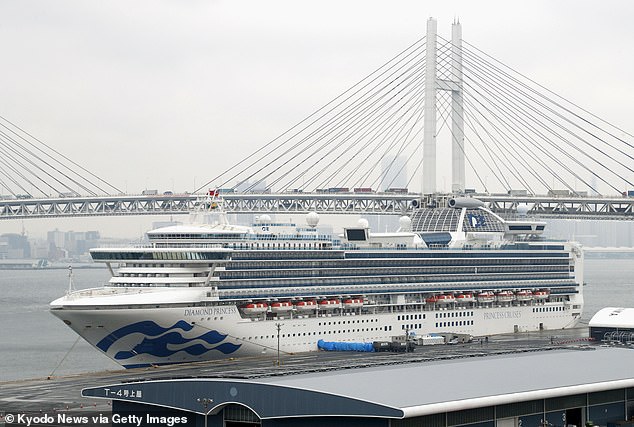 His wife’s symptoms went away and she returned a negative result, before testing positive again.

Mr Honey said there is nothing the doctors could do and they just need to build an immunity to the illness.

He said they’ve had a ‘gutful’ of being stuck in quarantine – both on the boat and in hospital – and feel like the forgotten Australians stranded in Japan.

In an update on Wednesday, Mrs Honey said: ‘Sorry I haven’t been on here any sooner but had a rough couple days and didn’t want to write my frustrations, anger, emotions or I will have to write a novel.’

‘Anyway both Jason and I got our results back yesterday and as you all know I was waiting on my second negative well unfortunately we both came back positive again.

‘Once again though I cannot emphasise enough that everyone’s messages of support, love and encouragement is whats helping us get us through this nightmare.’ 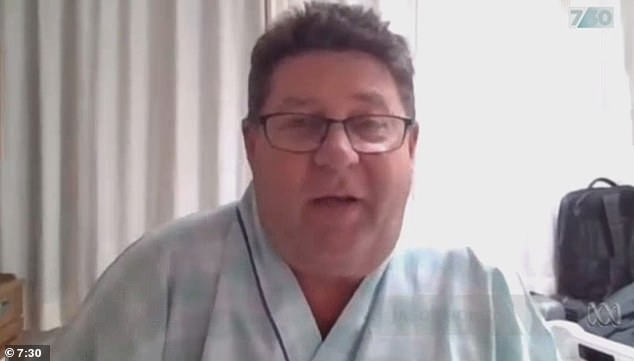 On February 20, Mr Honey also tested positive despite showing no symptoms of infection. ‘It’s really weird,’ he said. ‘I’ve got no symptoms,’ he told ABC’s 7.30 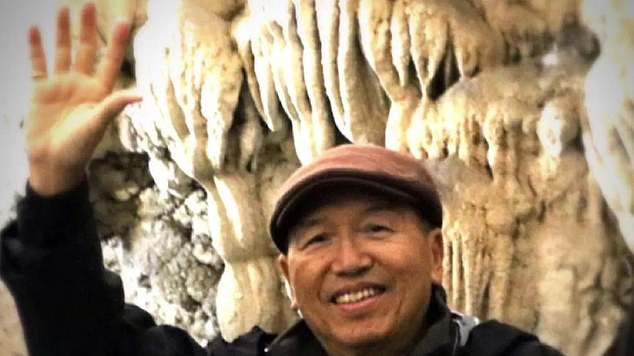 James Kwan (pictured), 78, was quarantined on the Diamond Princess Cruise ship and died on Sunday

James Kwan, who was quarantined on the Diamond Princess Cruise ship, became the first Australian to die from coronavirus.

The 78-year-old was transferred to Perth from Darwin on February 21 and died on Sunday.

At least 62 people in Australia are confirmed to have fallen ill with the deadly respiratory illness.

In NSW, a Year 11 Sydney student is the latest person to test positive for the virus. Epping Boys high School was shut on Friday and staff and students have been advised to self-quarantine at home.

The death of an elderly NSW woman in an aged care facility has also meant 17 children had to be tested after they visited the Dorothy Henderson Lodge at Sydney’s Macquarie Park.

Worldwide, the coronavirus has spread to 80 countries, with 95,000 confirmed cases and 3,250 deaths.

CORONAVIRUS CASES IN AUSTRALIA CLIMB TO 63

Three men aged 43, 53, and 35 who had recently travelled to China contracted the disease.

Two flew in from Wuhan while the other arrived in Sydney from Shenzhen, south China.

They were treated in isolation at Westmead Hospital.

A 21-year-old woman is identified as the fourth person to test positive for the illness in NSW.

The woman, a student at UNSW, flew into Sydney International Airport on flight MU749 on January 23 and presented to the emergency department 24 hours later after developing flu-like symptoms.

A man in his 40s is confirmed as the fifth coronavirus case in the state and a woman in her 50s as the sixth. Both returned to Sydney from Iran.

The 41-year-old sister of a man who had returned from Iran with the disease was one of three confirmed cases. The second locally-acquired case was a 53-year-old male health worker who hadn’t travelled for many months.

The other new case is a 31-year-old man who flew into Sydney on Saturday from Iran and developed symptoms 24 hours later.

It also included two women aged in their 60s who arrived in Sydney from South Korea and Japan respectively.

A man in his 30s who returned from Malaysia to Sydney on Malindo Air flight OD171 on March 1 was also one of the six.

A 50-year-old carer was the final of the day’s six people diagnosed with coronavirus. The woman is a carer at a nursing home in Macquarie Park in Sydney’s north. She had not been overseas and contracted the virus in Australia.

A 95-year-old woman died at a Sydney hospital on Wednesday night after developing a respiratory illness from the coronavirus, bringing the death toll to two.

A Macquarie University lecturer tested positive for coronavirus on Wednesday after returning from Iran.

A further six cases confirmed on Wednesday evening. They included an 82-year-old aged care resident from the Dorothy Henderson Lodge, where the 95-year-old woman was staying.

The new cases include a female doctor who works at Liverpool hospital, a female patient from the Northern Beaches, a male from Cronulla, a woman who returned from the Phillippines and a woman in her 70s.

A health care worker, who attended the same conference as the doctor from Ryde Hospital, also tests positive.

A boy from Epping Boys High School is diagnosed with COVID-19 forcing the school to temporarily close.

A Chinese national aged in his 50s becomes the first confirmed case of the coronavirus in Australia.

The man flew to Melbourne on China Southern flight CZ321 from Wuhan via Guangzhou on January 19.

He was quarantined at Monash Hospital in Clayton in Melbourne’s east.

A Victorian man in his 60s is diagnosed with the coronavirus.

He became unwell on January 23 – two days after returning from the Chinese city of Wuhan, the epicentre of the outbreak.

The man was confirmed as positive on January 29 and was subsequently seen by doctors at the Monash Medical Centre.

A woman in her 40s is found to have coronavirus.

She was visiting from China and mostly spent time with her family.

She is being treated at Royal Melbourne Hospital.

A woman in her 20s in Melbourne is found to have the virus.

Another passenger taken off the cruise ship tests positive.

Victorian man confirmed to have coronavirus after the 78-year-old was evacuated to Melbourne from a Darwin quarantine centre.

It is confirmed a Victorian woman in her 30s has tested positive for coronavirus after flying from Malaysia to Melbourne via Indonesia.

Victorian man in his 30s confirmed to have coronavirus after returning from Iran. Health Minister Jenny Mikakos said the man was ‘almost symptom-free’ after self-isolating

Queensland confirms its first case after a 44-year-old Chinese national was diagnosed with the virus. He is being treated at Gold Coast University Hospital.

A 42-year-old Chinese woman who was travelling in the same Wuhan tour group as the 44-year-old man tests positive. She is in Gold Coast University Hospital in stable condition.

An eight-year-old boy was diagnosed with coronavirus. He is also from the tour group where the other Queensland cases came from.

A 37-year-old man, who was a member of a group of nine Chinese tourists in quarantine on the Gold Coast, also tested positive.

A 37-year-old woman was diagnosed with coronavirus from the same travel group that flew to Queensland from Melbourne on January 27.

Two Queensland women, aged 54 and 55, tested positive for COVID-19 and will be flown to Brisbane for further treatment.

A 57-year-old woman from Queensland also tested positive for the virus.

A 63-year-old woman was confirmed to have the virus after returning to the Gold Coast from Iran.

A 20-year-old man from China was confirmed as the tenth person to be infected by the coronavirus in Queensland. The man had travelled to Dubai for at least 14 days before entering Australia, via Brisbane on February 23.

A 26-year-old man from Logan in Brisbane is diagnosed with coronavirus. He arrived back in Australia from Iran.

An 81-year-old man who had returned to Brisbane from Thailand and a 29-year-old woman who had come via Singapore from London are diagnosed with coronavirus.

A Chinese couple in their 60s who arrived in Adelaide from Wuhan to visit relatives are confirmed to have coronavirus.

A 24-year-old woman from South Australia was transferred to Royal Adelaide Hospital.

Mother, 40, is diagnosed after flying to Australia from Iran via Kuala Lumpur.

Another 24-year-old woman, not related to the previous woman, was in a stable condition in Adelaide hospital after falling ill following overseas travel.

The eight-month-old child of the 40-year-woman, diagnosed on March 4, is also diagnosed with coronavirus.

A 78-year-old man from Western Australia was transferred to Sir Charles Gairdner Hospital in Perth. On February 28, he was taken into intensive care in a ‘serious’ condition and later died. His wife was also diagnosed with coronavirus.

The elderly man died in the early hours of the morning from the virus at Sir Charles Gairdner Hospital.

A woman in Perth is diagnosed with the virus after flying into the city from the UK, via Dubai

The man who travelled from Iran to Australia on Saturday tested positive for COVID-19.

A tourist in Darwin has tested positive for coronavirus in what is the first confirmed case in the Northern Territory.

NT Health confirmed the 52-year-old man as the first case of COVID-19 in the community on Wednesday evening.

The man recently arrived in Darwin via Sydney and has had limited contact with the local community, NT Health said in a statement.