New York Governor Andrew Cuomo has said that President Donald Trump’s proposed quarantine of New York to limit the spread of coronavirus would be tantamount to a ‘federal declaration of war.’

‘If you start walling off areas all across the country it would just be totally bizarre, counter-productive, anti-American, anti-social,’ said Cuomo in an interview with CNN on Saturday.

Trump said earlier on Saturday that he is considering quarantining ‘heavily infected’ New York, and parts of Connecticut and New Jersey, in a desperate effort to slow the spread of coronavirus.

‘This is a civil war kind of discussion,’ Cuomo said of the proposal. ‘I don’t believe that any administration could be serious about physical lockdowns of states.’ 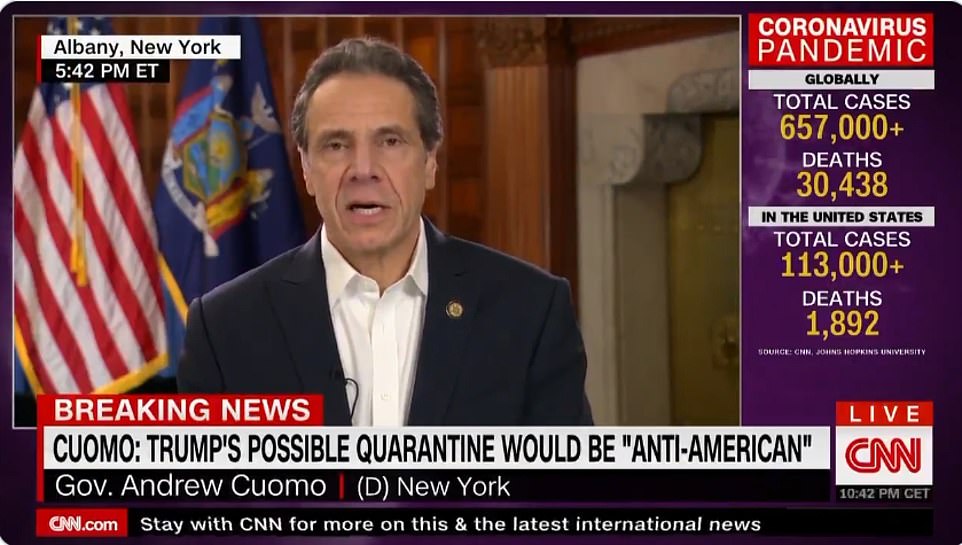 ‘If you start walling off areas all across the country it would just be totally bizarre, counter-productive, anti-American, anti-social,’ said Cuomo in an interview with CNN on Saturday 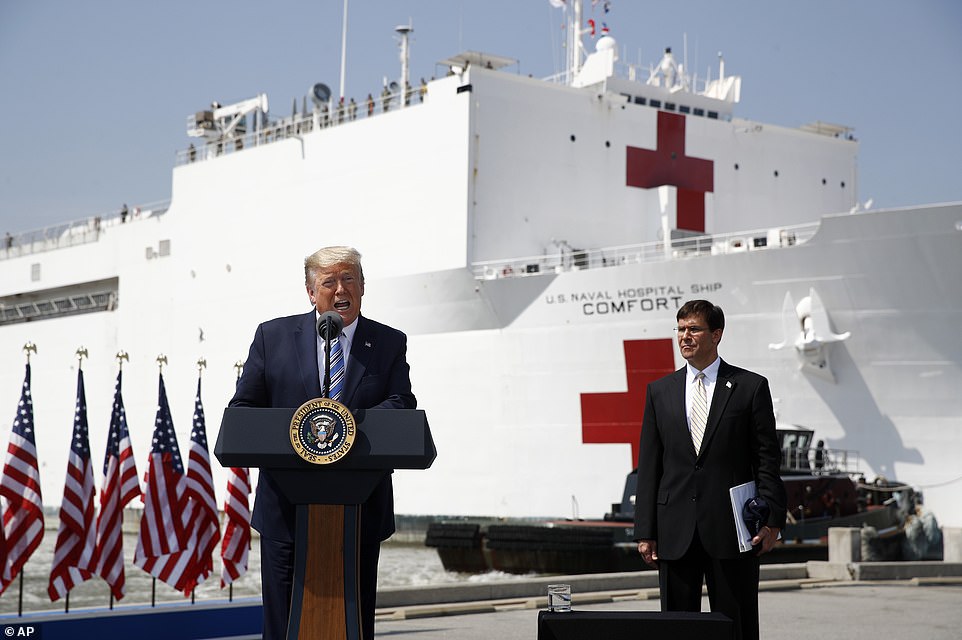 Trump speaks in front of the US Navy hospital ship USNS Comfort at Naval Station Norfolk in Norfolk, Virginia, Saturday. He said he is considering quarantining New York and parts of Connecticut and New Jersey in a desperate effort to slow the spread of coronavirus

Cuomo said that it would probably be illegal to quarantine New York, as well as totally ineffective, given the rise of other virus hotspots in the country such as New Orleans.

‘It makes absolutely no sense and I don’t think any serious governmental personality or professional would support it,’ Cuomo said.

Trump’s proposed quarantine would restrict travel to and from the three states, which are some of the hardest-hit by the outbreak, as it emerged that 209 people died in New York state in the last 24 hours.

In New York City alone, there are 29,766 confirmed cases, and there have been at least 450 deaths.

‘Some people would like to see New York quarantined because it’s a hotspot — New York, New Jersey maybe one or two other places, certain parts of Connecticut quarantined. I’m thinking about that right now,’ he said Saturday.

‘We might not have to do it but there’s a possibility that sometime today we’ll do a quarantine – short term – two weeks for New York, probably New Jersey, certain parts of Connecticut.’ 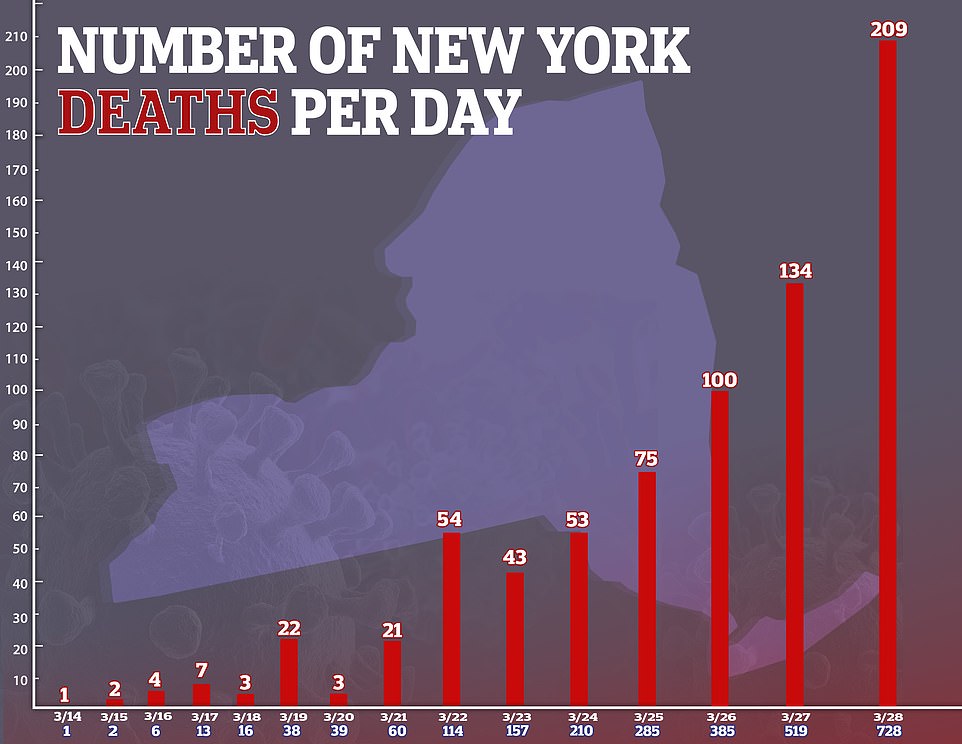 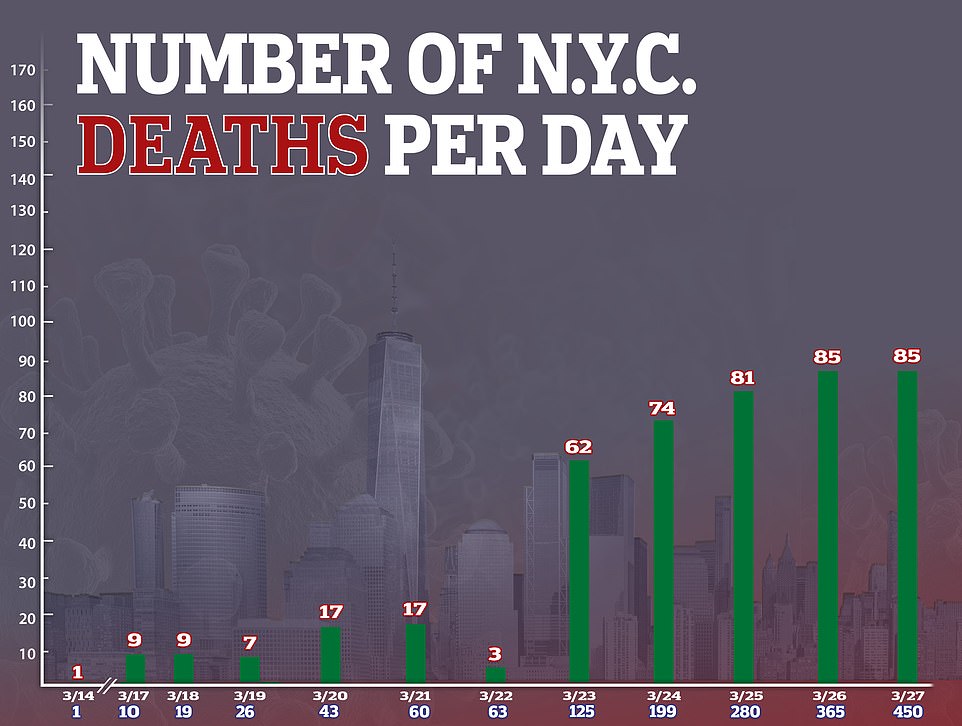 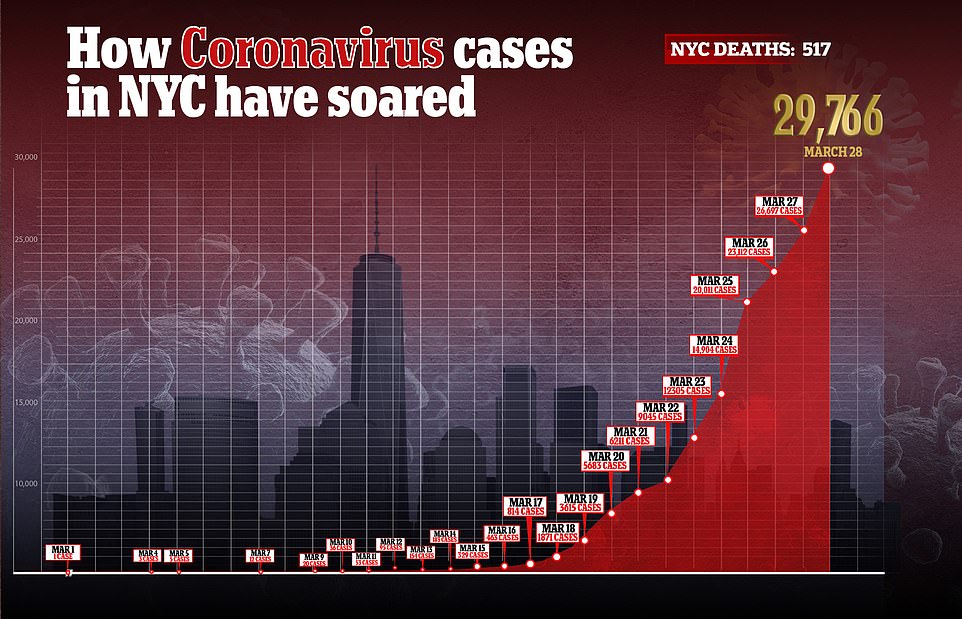 Trump said the possible quarantine would be ‘short-term’ but that it would be ‘enforceable’.

The president dismissed the idea that he would need to deploy the National Guard to ensure residents comply with the quarantine rules.

‘We’re not going to need that,’ he said.

‘We’re looking at it and will be making a decision. A lot of the states that are infected – they’ve asked me if I’d look at it so we’re going to look at it. Maybe for a short period of time,’ Trump said.

‘It would be for a short time’ for parts of New York, Connecticut and New Jersey, he said.

However when asked if he would shut down the New York City subway he said: ‘No we wouldn’t do that.’

It was not clear whether Trump would be able to block road, air and sea travel out of a region that serves as the economic engine of the eastern United States, accounting for 10 percent of the population and 12 percent of GDP.

Some states have already imposed limits. New Yorkers arriving in Texas, Florida and Rhode Island face orders to self-isolate if they intend to stay. 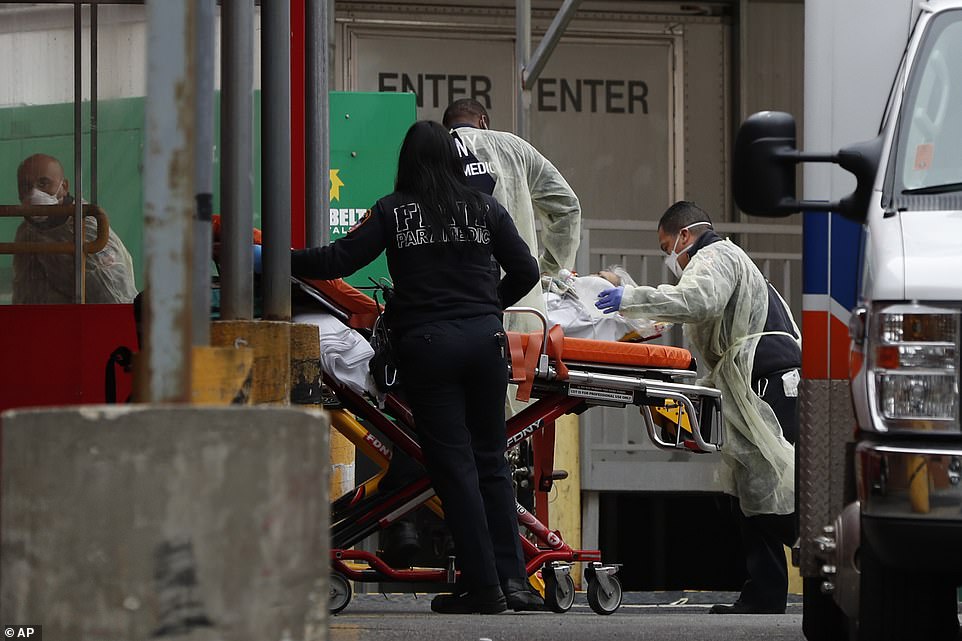 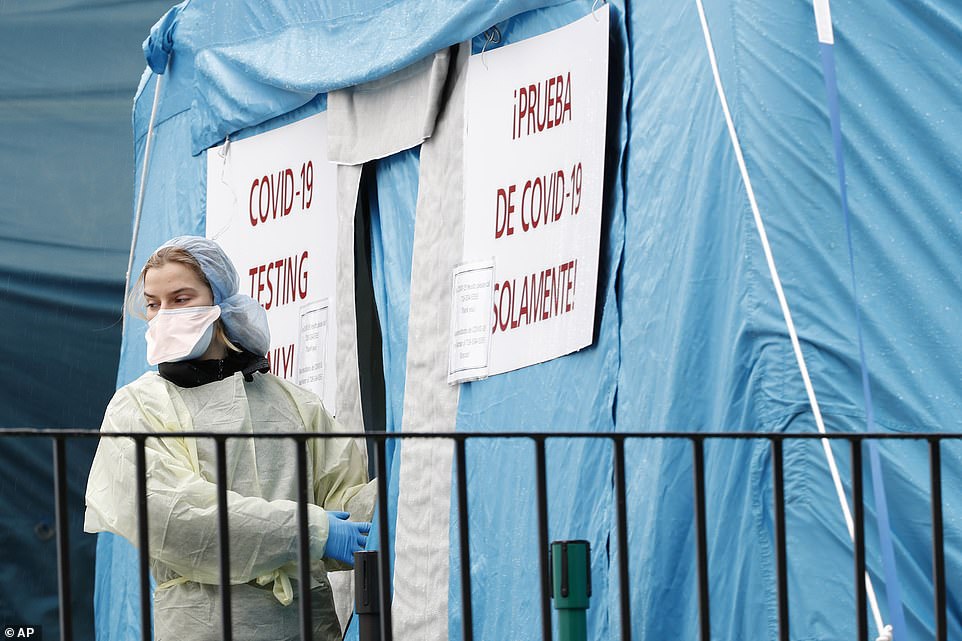 A medical worker prepares to reenter a COVID-19 testing tent set up outside Elmhurst Hospital Center in New York on Saturday. The hospital is caring for a high number of coronavirus patients in the city, and New York leads the nation in cases 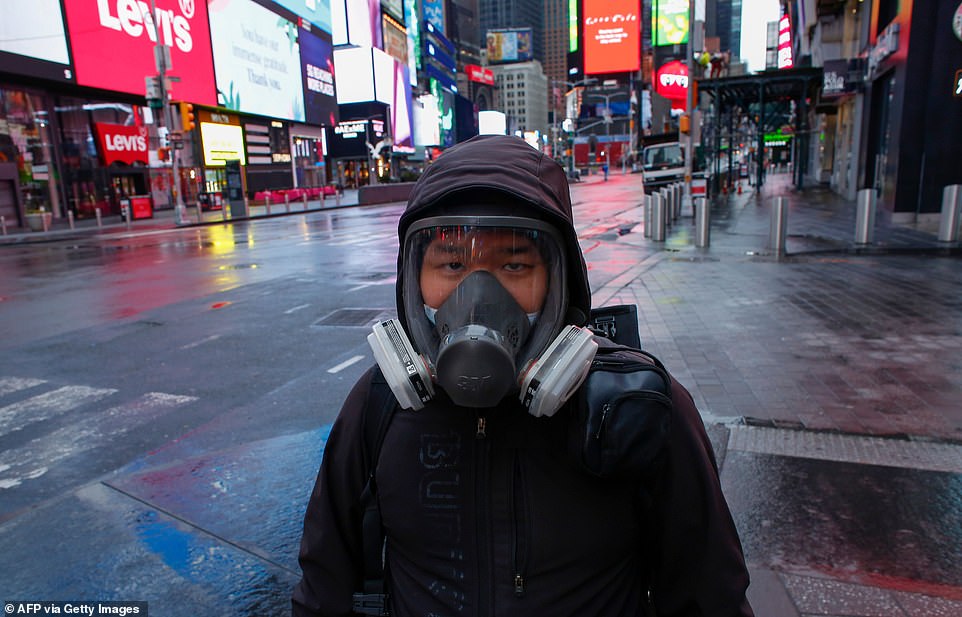 A man wears a face mask while he visits Times Square as rain falls on Saturday in New York City. Trump said on March 28, 2020 that he’s considering a short-term quarantine of New York state, New Jersey, and parts of Connecticut 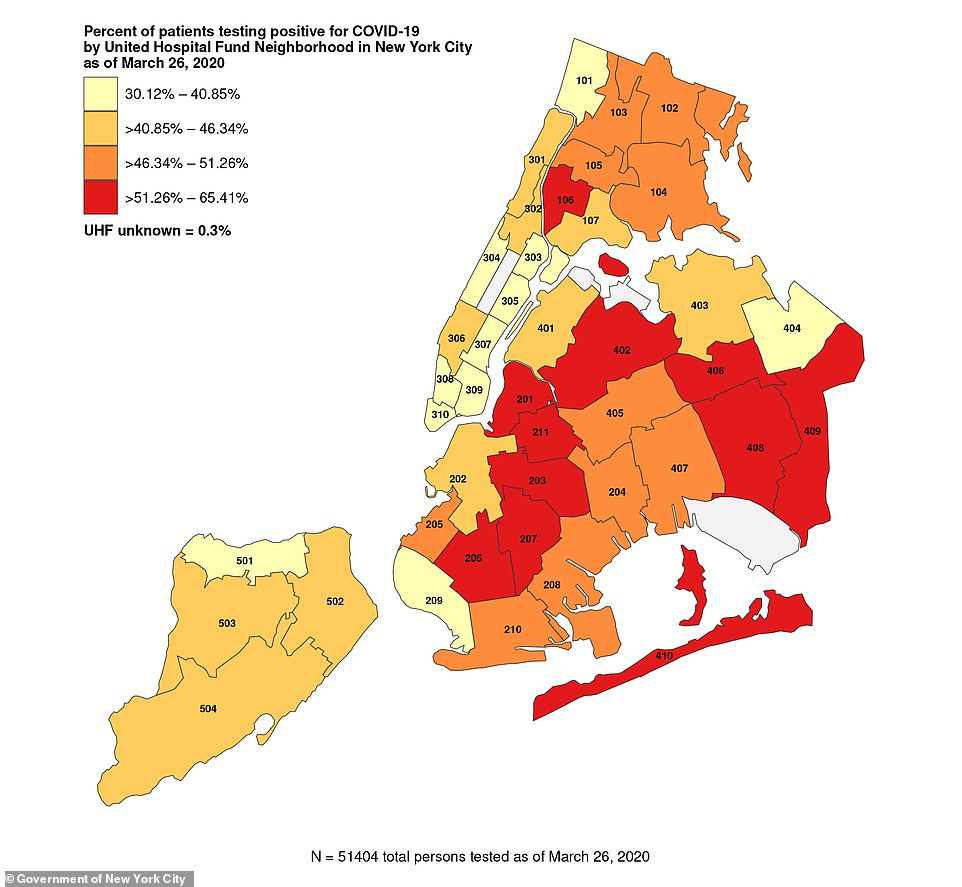 The Rhode Island National Guard started going door to door on Saturday in coastal areas to inform any New Yorkers who may have come to the state that they must self-quarantine for 14 days.

Raimondo also ordered residents to stay at home, with exceptions for getting food, medicines or going to the doctor, and ordered nonessential retail businesses to close Monday until April 13 to help stop the spread of the coronavirus.

She also directed realtors and hotel operators to include new requirements that any out-of-state residents must quarantine for 14 days in their purchase agreements.

State Police set up a checkpoint on I-95 in Hope Valley on Friday where drivers with New York license plates must stop and provide contact information and were told to self-quarantine for two weeks. 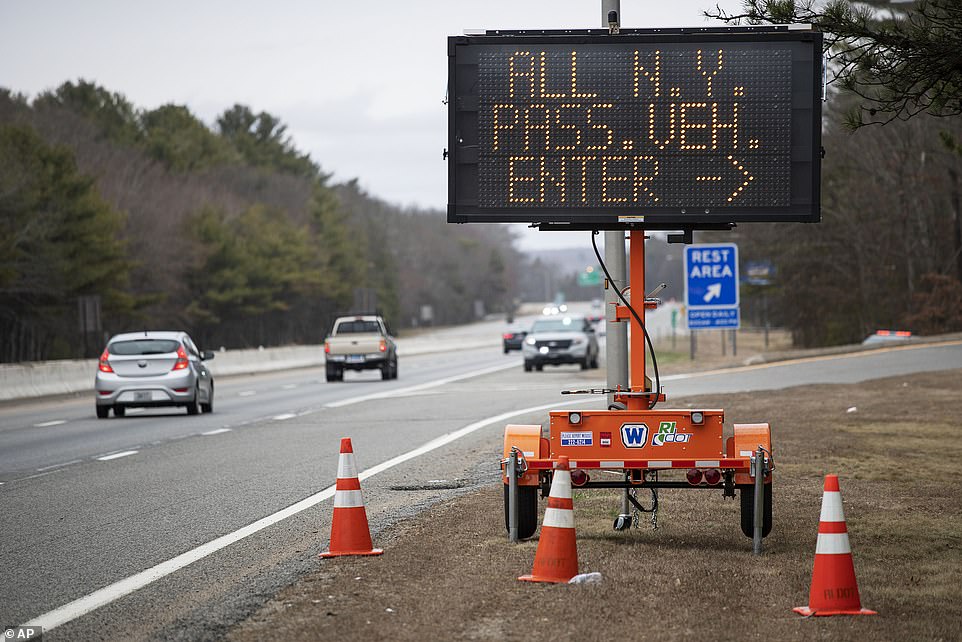 A sign in Rhode Island instructs motorists with New York license plates to pull over at a checkpoint on I-95 over the border with Connecticut on Saturday. Rhode Island’s governor ordered the military-style checkpoints 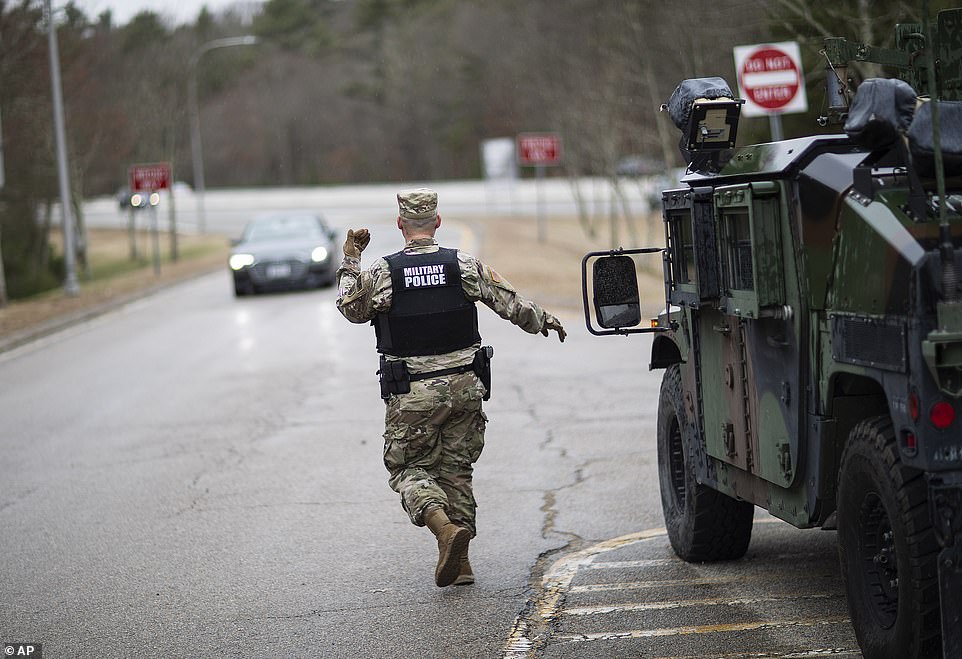 A member of the Rhode Island National Guard Military Police directs a motorist with New York license plates at a checkpoint on I-95 near the border with Connecticut on Saturday. All New York motorists must register and self-quarantine 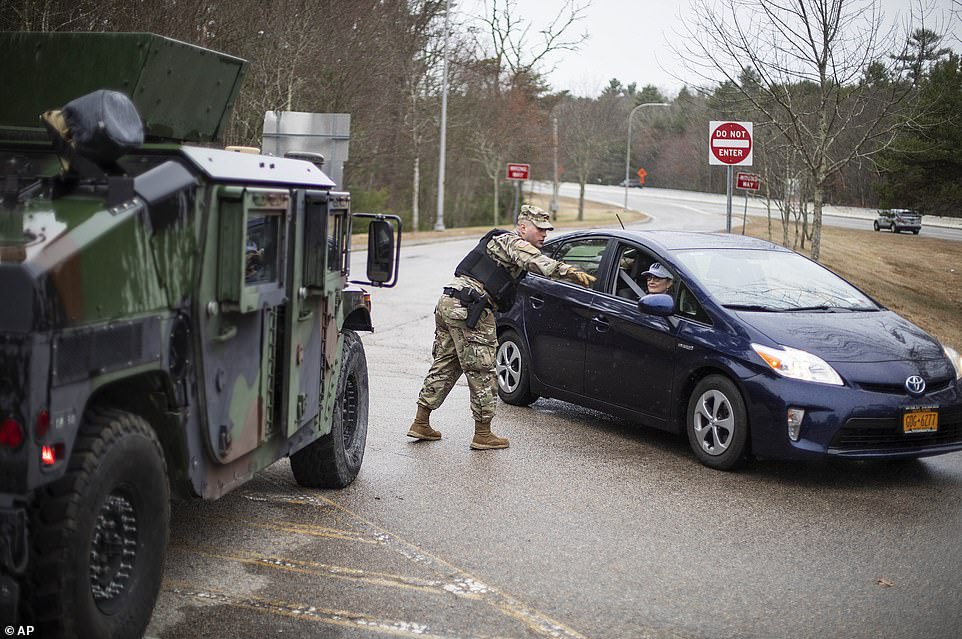 In Rhode Island on Saturday, drivers with New York license plates must stop and provide contact information and were told to self-quarantine for two weeks after entering the state

If New Yorkers don’t comply, they face fines and jail time, Raimondo said, adding that that’s not the goal.

‘I want to be crystal clear about this: If you’re coming to Rhode Island from New York you are ordered into quarantine. The reason for that is because more than half of the cases of coronavirus in America are in New York,’ Raimondo said, adding that it’s not meant to be discriminatory.

The governors of Pennsylvania and West Virginia have also asked visiting New Yorkers to voluntarily self-quarantine.

New Hampshire Governor Chris Sununu on Saturday asked all visitors to his state who don’t come for work reasons to voluntarily self-quarantine.

Trump said any New York-area lockdown would only apply to people leaving the region. It would not cover truckers making deliveries or driving through the area, he said. 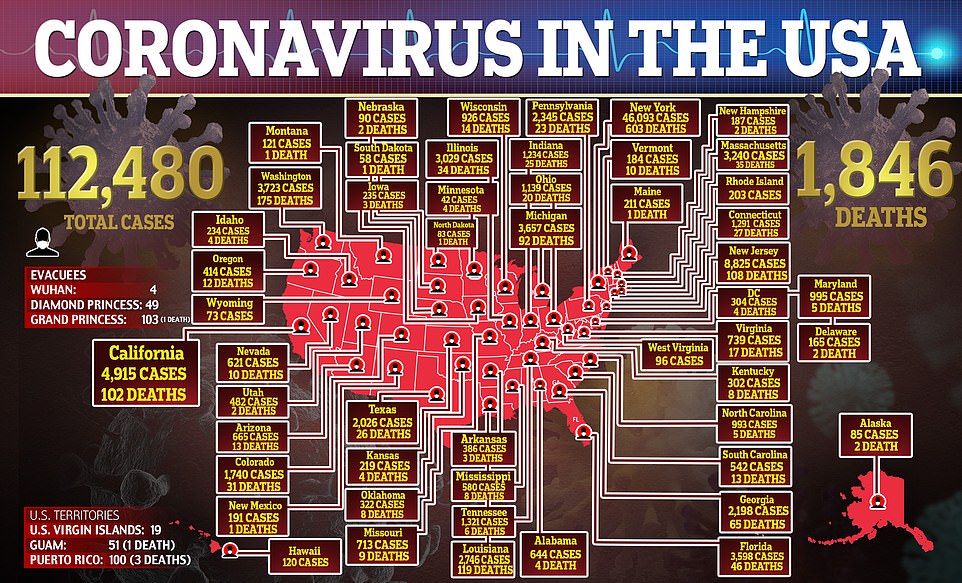 U.S. law gives the president the authority to restrict travel between states, legal experts said. But he would not be able to enlist local police to set up checkpoints along state lines, and it would be difficult to determine who would be allowed to get through, said Louisiana State University law professor Edward Richards.

Even if it were possible, a New York-area lockdown might come too late for the rest of the country.

The disease has proven most fatal among the elderly, but Illinois Governor J.B. Pritzker said on Saturday that an infant had died in his state.

New York City healthcare workers are appealing for more protective gear and equipment as they face a surge of patients.

Doctors are also especially concerned about a shortage of ventilators, breathing machines needed for those suffering from COVID-19, the pneumonia-like respiratory ailment caused by the highly contagious novel coronavirus.

Hospitals have also sounded the alarm about scarcities of drugs, oxygen tanks and trained staff.

On Saturday, nurses protested outside the Jacobi Medical Center in New York, saying supervisors asked them to reuse their masks, putting their own health at risk. 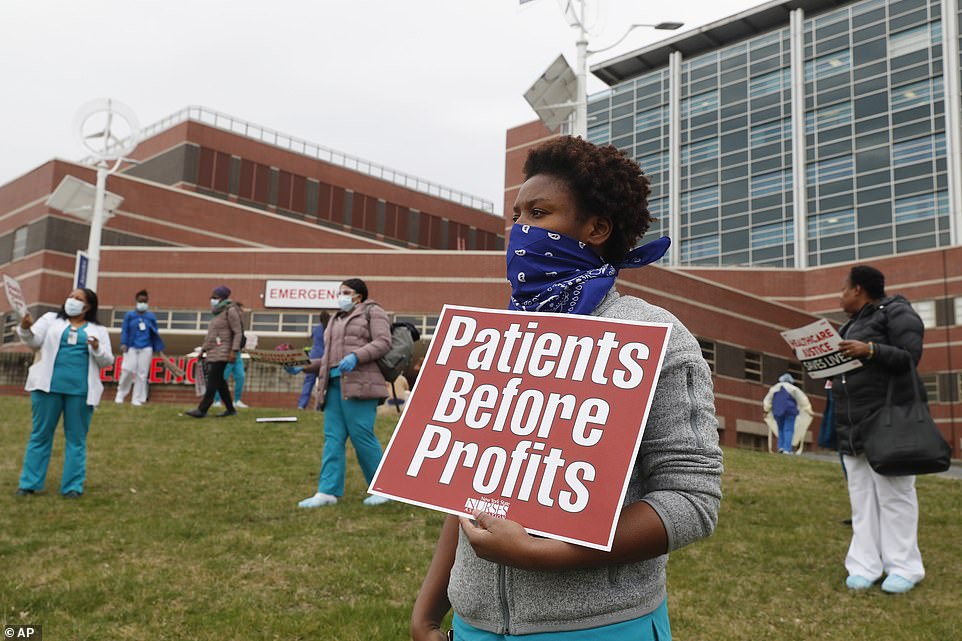 A nurse demonstrates along with others outside the emergency entrance to Jacobi Medical Center in the Bronx on Saturday, where some nurses say they don’t have enough personal protective equipment and have forced to reuse theirs 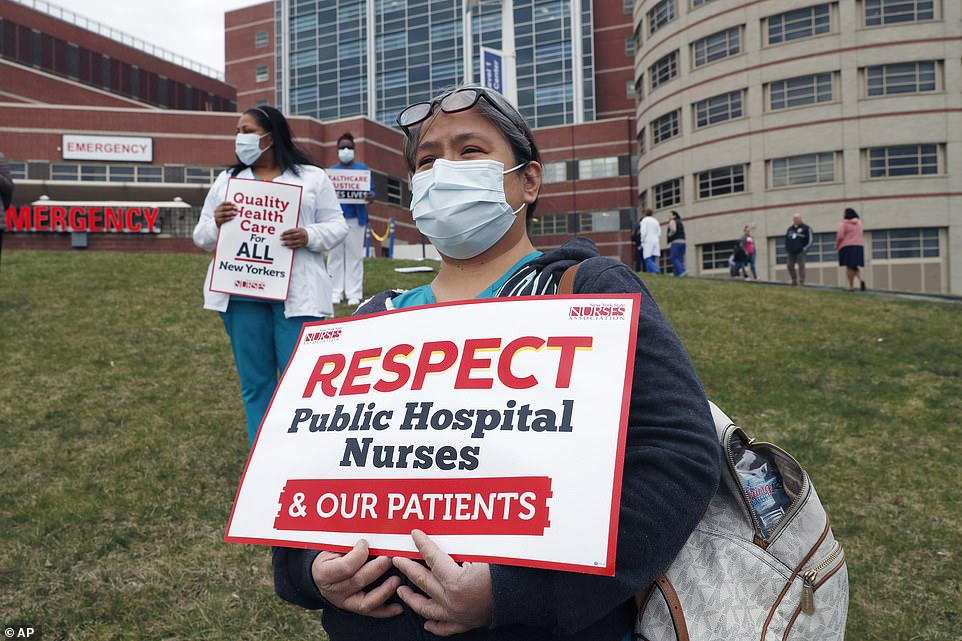 The city leads the nation in the number of coronavirus cases. Nurses at Jacobi and across the city say they are having to reuse their protective equipment, endangering patients and themselves 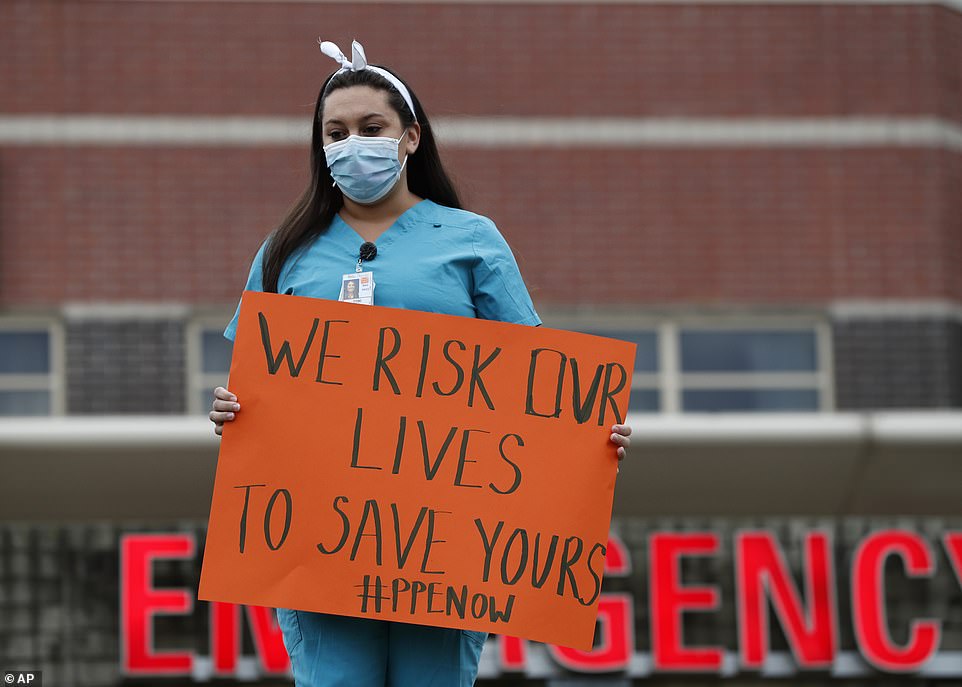 One medical trainee at New York Presbyterian Hospital said they were given just one mask.

‘It’s not the people who are making these decisions that go into the patients’ rooms,’ said the trainee, who spoke on condition of anonymity.

Inside the city’s hospitals, stretched to their limits by the crisis, healthcare workers faced unspeakable scenes of suffering and death.

‘Hell. Biblical. I kid you not. People come in, they get intubated, they die, the cycle repeats,’ said Dr Steve Kassapidis of Mount Sinai Queens, in an interview with Sky News. ‘9/11 was nothing compared to this, we were open waiting for patients to come who never came. Now they just keep coming.’

FDNY officials are strongly urging New Yorkers to call 911 only if they are having urgent emergencies, such as heart troubles or problems breathing.

‘Please allow first responders to assist those most in need. Only call 911 if you need help right away,’ the department said in a statement.

On both Thursday and Friday, another 85 people died of the virus here, or an average of one New Yorker every 17 minutes.